Video shot in March 2008 of the now infamous pool.

"Full of shit, impossibly snobby." -- The Locals Guide to BS in SB

So last Sunday some friends and I decided to meet at The Raleigh Hotel for a leisurely afternoon of mojitos, sandwiches and good conversation -- an activity we've enjoyed more than once in the past.

At one such gathering, I had spoken with a hospitality manager who told me that The Raleigh wanted to bring class and sophistication back to South Beach. "It's not all about the clubs anymore," he explained. "We want to make the hotel more attractive to locals."

I couldn't agree more. The Raleigh is a historic Collins Avenue property with great class appeal -- sophisticated, yet casual. It's more expensive, to be sure, than hanging out at Flamingo Park with a bottle of Mad Dog, but heck, when you "do" hotel on Collins Avenue, you're paying for the fantasy of genteel grace, even if it means farting Krugerrands out of your ass.

When we arrived at the hotel on Sunday, we had no idea that the property would be closed to the public on Monday for an entire week. Apparently Karl Lagerfeld would be in town to present Chanel's cruise collection. And by cruise, I don't mean the verb, you know -- smack talk such as gay men looking for bathroom sex, papi chulos wagging their tongues at chongas in bumper-to-bumper traffic on Ocean Drive, or hookers pulling tricks by the Setai, no -- by cruise I mean clothes that wealthy women wear on big boats.

Since we knew nothing about this fashion event, we thought that the pool had been cordoned off for maintenance. Mind you, the only unusual feature about the pool on Sunday was some kind of white sheeting wrapped around its shallow edge, which we couldn't see very clearly from our lounge chairs at the far end of the tree-covered patio.

One of my friends had used his telephoto lens to capture the fountain above the pool when a security thug, dressed in black CIA-style, approached him. "Let me see the photos," he demanded. "Don't take photos of the pool," he grunted firmly. "Chanel people."

We had to suck on our sugar cane sticks just to keep from laughing. God forbid we should be undercover paparazzi spying on the precious runway! But what runway? There was no fucking runway! Good grief, I was already hastily scribbling on a napkin -- The Mystery of the Phantom Runway.

Since none of us intended to leak photos to Women's Wear Daily, we continued carrying on in our own little corner of the patio, minding our own business and having a darn good time. We took occasional snapshots of ourselves, sent messages to Twitter and live stream video to Qik, but never aimed any of our electronic devices at the God damn freakin' pool.

What's more, we saw no evidence of the so-called Chanel people. Well, actually -- one plain, unremarkable-looking woman walked by with a Chanel bag, but she could've been a regular hotel guest sporting a knock-off. Other than that, we saw no models, no fashionistas, no celebrities, no hairdressers, no make-up artists, no stagehands, no lights, no props -- NOTHING. We never even caught a whiff of Chanel No. 5, although the scent of clothes dryer did waft in from the laundry room. 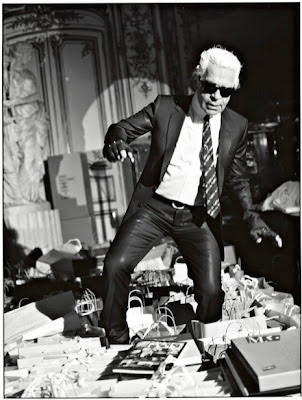 Men in black: Karl Lagerfield sworn in as director of Homeland Security. The Chanel anti-polyester task force has recently uncovered 12 bails of polyester/cotton/spandex blend smuggled via a container unloaded at the Port of Miami. The illegal cargo has an estimated street value of three mojito pitchers at The Raleigh Hotel. The find will hopefully lead to a bust of a highly dangerous international bad fabric cartel.
We did get a runway show all right. Security thugs, hotel managers, waiters and a man who might've been a Chanel person lorded it over us. As you already know, first it was don't take photos of the pool. Simple enough, right?

But later it was don't take photos in the general direction of the pool.

Eventually, it was don't take photos of yourselves followed by don't take any photos at all.

Finally, after one of my friends asked why we could no longer take photos of ourselves, it was I'm going to confiscate your camera and I'm going to call the cops.

I could see the headline now:

LOCAL BLOGGER VIOLATES COUTURE QUARANTINE OF RALEIGH HOTEL POOL
Perhaps it sounds like my friends and I were acting like a bunch of uncooperative assholes, but consider this: we spent a total of $666 at The Raleigh Hotel, valet parking included, over a period of several hours and we graciously refrained from taking photos of the pool. Had we been told the moment we walked into the hotel that ALL PHOTOGRAPHY WAS ABSOLUTELY PROHIBITED, PLEASE PARDON THE INCONVENIENCE, we would've obliged, but the message was never clear, until the words cops and confiscation came up toward the end of the evening.

For real? Can a hotel confiscate your camera and threaten you with police action if you never signed a release?

And all this over a fucking fashion event that wasn't yet even taking place?

Oy vay! Raleigh, darling: why so much tough love? Please, we adore you! Next time you have some high-falutin' I'm-too-sexy-for-mere-mortals show come into town, do me a favor, don't spoil our sweet mojitos with a bunch of sourpuss faces and passive aggressive security measures. I bet Carl Fisher is rolling in his grave right now!

Besides, you never know if those wacky locals who patronize hotel lounges are up to their asses in social media. Heck, one of them could be a forum editor whose opinion is trusted by thousands of readers worldwide!

Oh, yeah. It's all my fault. I was wearing Guerlain!

Email ThisBlogThis!Share to TwitterShare to FacebookShare to Pinterest
Labels: local 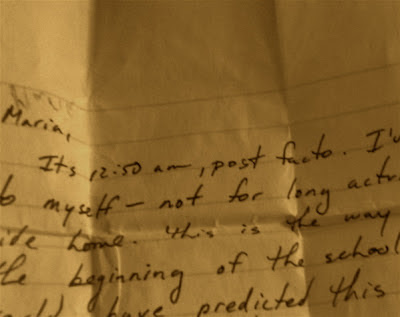 I sometimes wonder if her sense of loss inspires the compulsion to be a pack rat; I also wonder if my seeming detachment betrays some fear of loss. This much I do know: what I possess should never possess me.

I once promised myself, however, that I'd always keep a treasure chest -- one simple box filled with all the little things that shore up memories.

Recently, after making the decision to free myself of most possessions, I rummaged through the box and came across a stash of notes from high school. I laughed at myself for holding onto such peculiar keepsakes -- the yellowed ruled paper, folded into little squares, carrying words that are now over two decades old, evoking the thoughts and feelings of people who filled my life with joy then, reviving long-gone friendships that left their mark on my heart.

I had to pause and think about high school in the digital age. Do friendships forge differently over text messages? Do students know the mischievous pleasure of writing long letters during boring classes? Do the hands of lovers touch in the hallway as they exchange secret notes?

I picked a random note from the stash. It was from Alexander, a friend with whom I once shared a night of passionate kissing -- a night that took both of us by surprise.

You remember that night, don't you? I know you do, even though you weren't there.

Alexander and I were studying for college placement exams when we realized we already knew everything we needed to know except the one thing we didn't know -- each other.

David Bowie serenaded our tentative bodies. To this day, I cannot help but think of Alexander when I listen to Major Tom. Planet Earth is blue and there's nothing I can do ... specifically, I cannot help but think of Alexander's tongue, his smooth blond hair and long hands. If I close my eyes, I can recall a faint, salty scent and the intangible softness of his love making. But I didn't know he was so gentle then, because I didn't yet know much about men's embraces. This was just the beginning of my life's inventory.

It's 12:50 am, post-facto. I've been thinking to myself -- not for long actually, just the ride home. This is the way I see it. At the beginning of the school year, nobody could've predicted this . . . and no one can predict what will happen now. I understand exactly what you mean -- "all or nothing." I think we should wait to see what exactly happens between us -- tonight and this week -- before we make any standing decisions. Could this have been a whim? I don't think so, but it certainly wasn't planned to work this way. If it comes, fine; if it doesn't, that's fine also. I need a friend, let's not ruin a good friendship over passion.

Alexander and I would never become lovers and while the night passed into memory without any awkwardness, our friendship would dissipate, as so many friendships did, after graduation.

We weren't in love; we were just curious.

I smiled as I read his note, twenty three years and many embraces later. I was impressed by his diction and touched by the delicacy of his feelings. The fact that he took the time to write the note, that he thought of a potential "us" that warranted contemplation, that he handed it to me first thing in the morning at school -- all of these details led me to the conclusion that perhaps we weren't so immature at 18 years of age.

No money can buy this memory, a memory that swells my heart with a life lived well. I'm glad I stashed this old, crumpled piece of paper because over the years, it acquired new meaning and afforded me a glimpse into that hazy realm of the eternal. A life's worth of loves, of writings -- these are the things I'd keep under lock and key, these are the cherished possessions.
Posted by Maria de los Angeles at 9:00 AM 11 comments: