Our final Ford Fiesta mission: recreate scenes from a movie shot in your city. No doubt you've already guessed which movie we picked. Enjoy!

Did you recognize your Miami-Dade landmarks?

South Beach at Ocean Drive: The Palace Bar, Casa Casuarina (the infamous Gianni Versace gate) and the Carlyle Hotel, where another classic Miami film, The Birdcage, was filmed. As well, South Pointe Park, with a view of the behemoth condominiums. (And yes, that was Brad, fully-clothed in the water late afternoon when we had a slight cold front. Two takes.)

In Little Havana: the former home of Elian Gonzalez and site of such powerful political controversy, El Exquisito and El Pub restaurants, the sidewalk of stars, the Tower Theater and Maximo Gomez Domino Park. (And yes, filming that scene in front of Elian's house felt a bit like sacrilege!)

Although I only have a cameo in this video, I'm all over it, believe me. It was so much fun to play director for a change, instead of being in front of the camera. But of course, there was also much collaboration. Although Brad and I story-boarded our scenes, much of it was improvised on location, including dialogue. (Señor Gator also made a cameo. Remember him?)

This parody was a bit of a challenge because not only did it have to be done under five minutes, we had to keep it family-friendly. So instead of the word "fuck," which Tony Montana glorified in Scarface, we used the word "Ford" and instead of dealing cocaine, we went after the perfect cup of coffee.

We also didn't want to show any disrespect to Elian's family nor make fun of the Cuban wet foot/dry foot immigration policy ... but so it is.

Special thanks to local comedic genius Freddy Stebbins, who spent half a day with us shooting in Little Havana and let us use his kitchen for a location. This video would not be the same without his chongalicious performance and his manly voice-overs!

Thanks also go out to: Juan Coro of El Exquisito Restaurant, who warmly collaborated with us to let us shoot in "la ventanita" (window) of his iconic Little Havana restaurant; Ivan Mladenovic of Preemopc, who let us take over his living room one night so Brad could watch Scarface for the first time; and finally, to the Miami Beach Police Department for not getting in our hair when we double parked to shoot on Ocean Drive.

I'll be returning the car to a local Ford dealer at the end of the month. No word on whether I'll throw a fit and they'll have to yank my hands from the steering wheel. I will surely miss driving this car!

Ford is flying Brad and I out to Los Angeles next week for the LA Auto Show, where the Ford Fiesta will have its official U.S. unveiling. Three lucky agents will have a chance to win a car!

If you're in the area, come join us and a bunch of other agents for a free concert at the Hollywood Palladium on December 1st. RSVP required at Eventbrite.

If you miss the event, don't worry. Tune in to CurrentTV at 11:30/10:30 central time for a follow-up broadcast. And of course, no doubt I'll be tweeting with pictures and video live from @fordfiestamiami.

If you've enjoyed following our adventures, feel free to vote for "Maria D and Brad S" everyday until December 1st at the Fiesta Movement site. No prizes here -- it's just a popularity contest (which honestly, I don't care about, but there, I still had to tell you!)

The Fiesta Movement has been not only a brilliant social media project, but also one of the most rewarding and creative things I've done in my life. Although it sucked that I broke my leg, I wouldn't change a thing as it made it possible for me to work with Brad. We make a bad-ass, wicked storytelling crew of two! I'll be posting more of my thoughts on the subject after my trip to LA.
Posted by Maria de los Angeles at 10:14 AM No comments:

The Biggest and Tastiest Cock Evar!

My birthday is today, but I celebrated yesterday on the beach with many friends during a very windy evening.

I thought about writing something serious about being 42. You know, kvetching about how I'm still single, don't have kids, am a struggling creative type, still have some weight to lose bla bla bla ... but you know what? I'm just not feeling it!

I was surrounded by so many wonderful friends yesterday, that I can't complain about one fucking damn thing. Friends in person or friends from a distance -- it didn't matter. And thanks to social media, today has been just as warm and fuzzy.

My friend Pam Anderson (yes, that's her name, and she's indeed a sexy, well-endowed blond!) made me a colossal and delicious carrot cake, complete with a larger-than-life fondant penis. If this penile pastry doesn't scream "Sex and the Beach," I don't know what does! 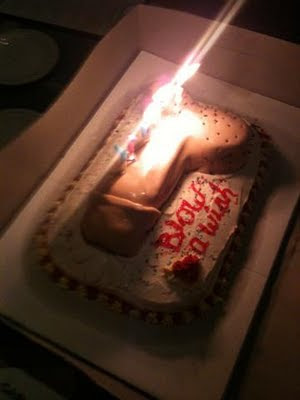 After I blew out the candles, my friends requested that I take a big bite out of the dick tip as a ceremonial first slice. Then I put on a latex glove and sliced accordingly. Of course, Lorena Bobbitt jokes were flying around the table.

Interestingly, most of the men wanted a slice from the scrotum, while the women preferred the shaft. A "prostate massage" proved unfruitful, but most of the testicles were left over.

Pam also made some tasty cupcakes with little marzipan cocks. 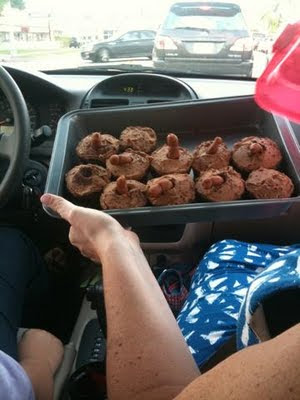 I won't even tell you what some other friends got me as a gag gift, but let's just say that it requires two AA batteries and can put a smile on my face!

I did however meet a younger guy in South Beach this Friday who had me falling in love for like 10 minutes. He was not only good looking and pleasant, but smart ... imagine that! All we did was talk but I'm pretty sure our pheromones were having a party of their own. No word on a repeat performance. But as we all know, relationships in South Beach are usually shorter than the life cycle of a fruit fly. Sigh.

I really, really despise the word "cougar" but this wouldn't be the first time that a younger man held tightly on to the reigns of conversation. Hey look it, they come to me, ok? I'm not chasing any tail.

Anyway, cupid seems to have flown the coop, but love from friends is definitely in the air. The love I get from my friends is something I cherish deeply. There is only one word that comes to mind when I think of my friends and connections: abundance. Thanks to all of you for being in my life!

In related news, perhaps inspired by being a forty-something, I'm starting a musical duo with my friend @bachinaminuet, a very talented musician who makes people's lives better through that art. The duo will be called Peri and Meno, "music for all of life's pauses." Stay tuned for some very hysterical lyrics!

Note: special thanks to Carrabbas on 39th street and Collins Avenue for putting up with all our shenanigans!
Posted by Maria de los Angeles at 5:10 PM 6 comments: