They say the iPad is going to revolutionize the world. Well, let's take it one step further! Can someone put me in touch with Steve Jobs and Apple developers?

here for a larger view.

Please take a look at a slight edit in my blog header. This is a product I no longer need! But single ladies, don't worry -- I'm still going to write for you.
Posted by Maria de los Angeles at 5:16 PM No comments:

Email ThisBlogThis!Share to TwitterShare to FacebookShare to Pinterest
Labels: cartoon

Learn all about the prolific burger eater, with some choice hardcore investigative questions by Carlos Miller. Shot live stream on Qik from my iPhone.
Last Sunday, Sef Gonzalez, aka Burger Beast, held an event at Charm City Burger in Deerfield Beach. Burger Beast has been a lot on the radar lately, which is probably why Carlos Miller dubs him "social media whore." If you don't believe me, check out this long thread at Miami Beach 411, started by Soul of Miami, about what it really means to be a social media expert. It's better than a Jerry Springer show!

But in truth, I think the friendly feud is just a front for a bromance. Mutual admiration is just oozing from their pores.

For me, the answer is no. Sef is just a really nice guy who likes to eat burgers and share his love of the humble patty with the rest of the world. And he's doing it in a clever way, using social networking sites. I mean seriously, if Sef is a social media whore, that would make me an old, washed-up harlot by now. More on Sef at my Miami New Times blog: Burger Beast Eats Up Social Media.

By the way, if you haven't been to Charm City Burger, you don't know what you're missing. The joint is small and unassuming but the burgers are large and in charge! Try the kobe beef with foie gras.
Posted by Maria de los Angeles at 12:31 PM 3 comments:

Gratuitous sexy bikini shot. I'm not trying to bait you to vote for me. Not at all!
Two honest plugs cancel out the shameless one, right?

IT'S ALL ABOUT ME!

I'm up for Post of the Year at South Florida Daily Blog. I've got some really good company here, folks, so please vote for the one post you think merits the honor. My posts are:

To vote, click here and scroll down to the pull-down poll menu. Make sure the post you want to vote for appears in the little blue box. Deadline is January 27th, 8 PM.

SEXY CHIC HAS MOXIE WILL TRAVEL

My lovely friend Bobbi Jo, South Florida native and current globetrotter, wants the best job ever: backpacking through Australia. All you gotta do to help her is click here to see her Youtube video by January 22nd. You know you wanna ... she's a smart hottie!

My other friend R, who used to write a Miami blog called Boho Poet Girl, has recently gone through a journey of recovery from addiction. I am so proud of her. She is writing again from her current place of residence in the northeast. I support her one hundred percent! Watch out for this one; she's a writer's writer. Check out Third Time's A Charm.
Posted by Maria de los Angeles at 2:24 PM 6 comments: 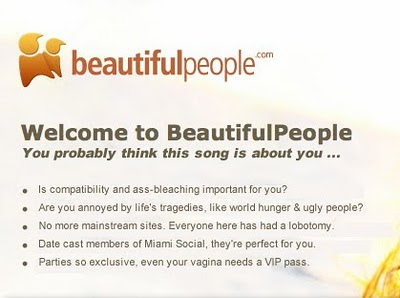 Big Brother is watching your waistline. Or at least the all-seeing community at Beautifulpeople.com, which recently banished 5,000 fatties to ugly land for posting pictures that revealed a bit too much of holiday pudge.

Even though it sounds like a publicity stunt from a would-be Eugenics Society, that's exactly what happened, according to various sources.

Those holding the reins blame members’ holiday overindulgences for their harsh actions and have been notifying former members via e-mail of their expulsion. Of course, all is not lost; should those same members get fit again, they can reapply for membership.

The social network, which prides itself in not letting ‘ugly’ people enter the site, claims these users had it coming by putting pictures of themselves celebrating during the holiday season, revealing that they ‘may have let themselves go’. The company also says ‘vigilant members, who take pride in the standards demanded by the site, called for action’.

In an exclusive interview, Sexcrunch got the down-low from Beautifulpeople.com consulting relationships coach, Dr. Dandy Dickfrost.

"Fat and ugly people pose a serious threat to the tender sensibilities of beautiful, sexy people," said Dr. Dickfrost. "One of our members was hospitalized for a severe panic attack after he discovered his date had a tiny patch of cellulite on her left buttock. He's still in recovery from the shock."

In our endless search for fair and unbiased reporting, Sexcrunch asked its resident medical consultant, Dr. Suck Mygupta, for a second opinion.

"Apparently, Dr. Dickfrost is not aware that most of the civilized world is fat and ugly and yet most manage to hook up, get it on and live happily ever after," he explained. "The truth is, relationships based on pure narcissism never succeed."

But in vapid universe, the matter is grave -- criminal, even. More important than world hunger and homeless polar bears.

"These gluttonous slobs who put on a pound or two over Christmas for eating grandma's cookies deserve to wallow in a pit of loneliness and despair for the rest of their lives," Dr. Dickfrost admonished.

"Frankly, it should be a federal crime to offend the eyesight of our perfect clients. What little pride they have, they invest all of it in their looks. Some of them even step on the scale after shaving just to see if it makes a difference. Only these people deserve to go out on dates."
Posted by Maria de los Angeles at 2:53 PM 4 comments: