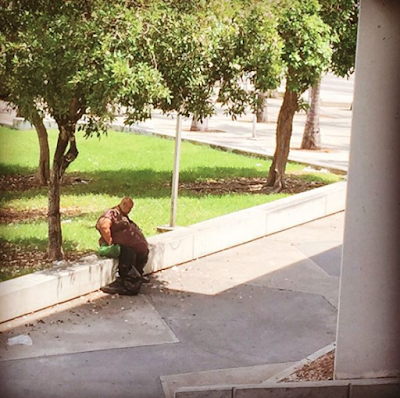 He lives in the metrorail station. Most of the time, he lies precariously on his side while his enormous belly, protruding from the same threadbare t-shirt he wears everyday, hangs over the low wall.

This Humpty Dumpty sat on the wall, had a great fall and could barely put himself back together again.

All the king’s men scurry by, too preoccupied with that precious illusion of having one’s shit together, to help this cracked shell of a man. They look angry in their pursuit of meaning.

They teach me nothing. He teaches me everything.

They rush. He sits.

Stripped of all possession except the air in his lungs and that massive burden of flesh, he embodies the journey of being human.

I trudge along my own path and face two choices at the turnstile: northbound or southbound, faith or uncertainty.

I wonder about the passers-by, many souls with roofs over their heads who seem absolutely miserable. Do they fear losing what they never possessed?  Do they fall off the wall, their shells cracking daily? Do they put themselves back together again but come home to an empty shell?

I like to think Humpty Dumpty's story is different.

Most of us would judge him as fallen, broken, laid to waste in poverty, an outcast from creature comforts and human love.

But Humpty Dumpty's shell is a flimsy veneer. The truth could only ever be revealed in the cracks. The cracks are the thing. In them we glimpse the beauty in imperfection, the source of compassion in abject misery, the gift of joy in immeasurable sadness, love where there never was love.

And so I wonder, every time I see this homeless man, what it truly means to be dispossessed.

And I claim as my own the only thing no one can take away from me: love.

No matter how many times I fall, or my shell breaks open, I never feel empty. A little glue can mend the cracks. No big deal.

Thank you, beautiful imperfect Buddha, for teaching me this lesson every time I see you on that loud, dirty corner of U.S.1.

A Mango Milkshake in Hialeah 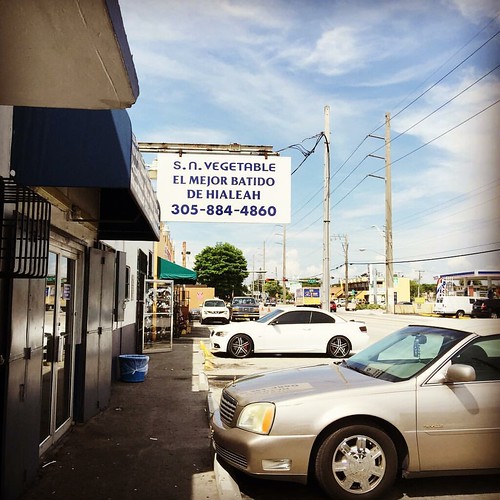 One day, while I was waiting for a milkshake at S & N Vegetable in Hialeah, I overheard a conversation.

Pointing at a poster on the wall, a woman asked a teenager: “Who is that?”

She corrected him. “No, that’s José Martí.”

Coño, was this some kind of joke?

No one gave the kid a chancletazo for confusing Cuba’s iconic poet and freedom fighter with one of human history’s most reviled dictators. This chiquillo clearly hadn’t earned his Cuban card.

“Well, at least I haven’t revoked mine,” I thought. 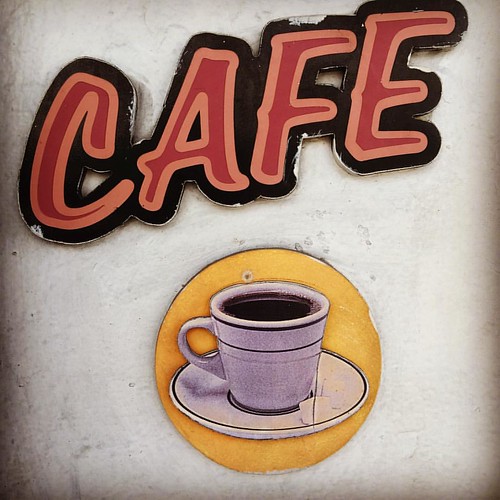 I journey often to Hialeah to visit my father in a nursing home. Although close in miles, Hialeah is a world apart and offers glimpses of what I can only describe as the familiar unfamiliar.

In Hialeah, I’ve discovered places far from my beaten path that shore up my sense of Cubanidad in Miami. Believe it or not, amigos, it’s possible to get by without even feeling a twinge of my Cuban heritage in a city that my gringo compatriots have described as “third world” and “north Cuba.”

“But you don’t look Cuban,” they tell me. Yeah, I get that often, even from Cubans. 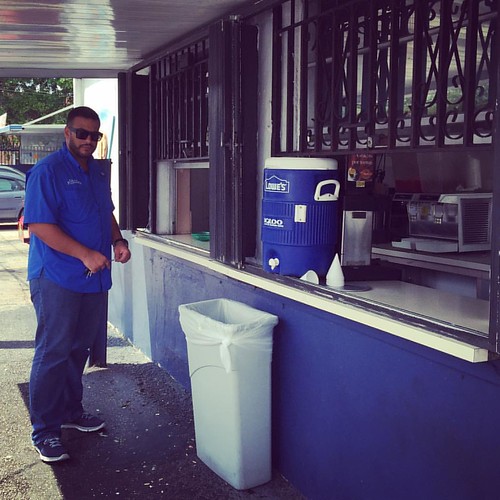 S & N Vegetable isn’t exactly true to its namesake. When I first walked into S & N Vegetable, I saw nothing of the kind. The place that claims to serve el mejor batido de Hialeah does not, in fact, serve vegetables.

No green vegetables. No trees.

On East 29th Street in Hialeah, there is only one tree on the sidewalk within the perimeter of my journey. This lone tree provides shade at the 3rd Avenue bus stop, which is popular among Jehova’s Witnesses. A well-dressed gentleman wearing a gold watch often finds his lost lambs here. “All buses go back to the train station,” he once told me, smiling kindly and pointing east toward Palm Avenue, even though I refused the religious pamphlet.

On my way to S & N Vegetable, I walk under the blinding sun and the rising heat from the pavement makes my nose itch.

I hear the city symphony. Rattling traffic joins the chorus of UPS trucks and city buses while reggaeton and salsa blasts from countless body shops. A car dealership, festooned with colorful flags and balloons, plays songs like Killing Me Softly to lure buyers. An eerie-sounding whistle plays from the loud speaker of the knife-sharpener’s truck.

Sin duda, in Hialeah I’m definitely far from the lush, tree-lined streets of that “other” Miami where I usually salivate over produce at swanky markets. 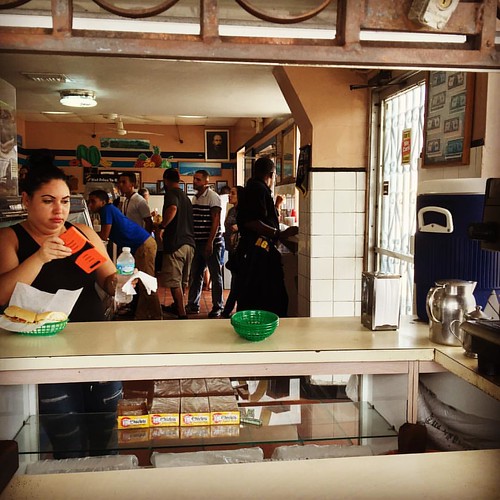 S & N is what most Cubans would call un timbiriche, a hole-in-the-wall spot that serves home-style grub. At S & N there are no tables and chairs, only countertops. Plastic baskets replace plates. And of course, there's the ubiquitous Cuban ventanita that serves cafecito.

Que carajo!   Who is my audience exactly? I just caught myself having to explain something so familiar to me to an audience that would consider it unfamiliar.

Maybe that’s because I’m hyphenated. For a Cuban-American, a thing is never just a thing. It’s two things. Cuban and American. English and Spanish. I have a foot in both worlds and I feel equally at home and equally foreign in one or the other at the same time. Bi-cultural writers are always lost in translation. They also find themselves in translation.

I’m a child of exile in exile from exile. I embrace both worlds. 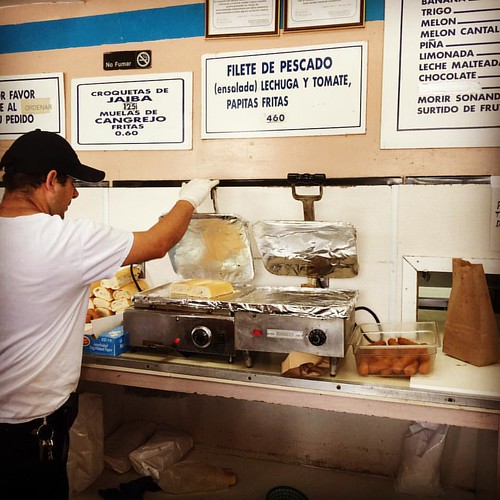 American Maria likes green vegetables. And in Hialeah, I stick out like that lone tree on 29th street.

But Cuban Maria also likes fruit -- not just any fruit. A mango at S & N is not the same as a mango at Whole Foods.

This timbiriche brings out the Cubanita in me and more: all the things I don’t take for granted, little things that I digest in my soul instead of my bariguita. The unnamable kernel of truth in the detail. The familiar unfamiliar. The extraordinary in the ordinary.

Here I find man who belts out food orders over the din of the restaurant with a deep, rich baritone. Paper is an afterthought here although he does scribble totals on a notepad. Organized chaos behind the counter unravels itself as dozens of shakes and sandwiches are served every day to hungry locals. 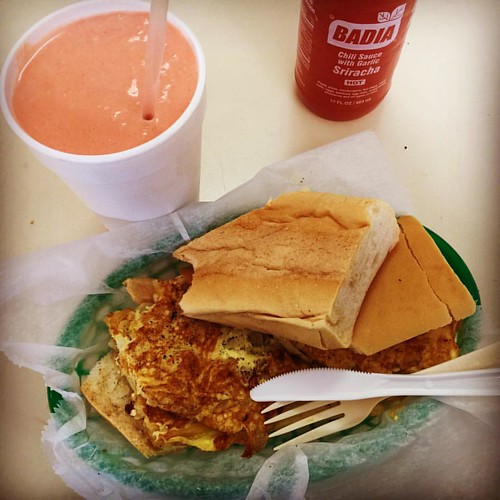 A watered-down, vinegary red sauce passes for sriracha. Me matas ahora, that ain’t sriracha. Adding to my suspicion: no card-carrying Cuban ever eats picante. At some point in Caribbean history, any hot peppers that grew on the island must have made a mass exodus to Jamaica.

I usually go for the simple pan con tortilla: a Spanish-style omelet, cooked to order with onions and potatoes, served piping hot in toasty buttered Cuban bread. A thick, rich fruit milkshake or a freshly squeezed orange juice affords me a filling meal under $6.

Two honorary vegetables have -- in spite of all the odds -- made the juice menu: carrots and beets. But kale and wheatgrass are strangers here. Like the city outside S & N’s gated doors and windows – everything is gated in Hialeah – there is a dearth of green.

A SPOONFUL OF LOVE

The place that claims to make the best milkshakes in Hialeah serves me something that doesn’t grow on a tree.

I go to S & N every time I visit my dad in the nursing home. I go because even though the American in me would rather eat something green, this spot, like many others in Hialeah, speaks silently to me in the language of comfort.

I go because my dad loves the sweet milk shakes: mango, guanabana, mamey, banana, papaya, pineapple – all fruits that remind him of Cuba.

I go because that simple milkshake, which I hold in my hands as I walk to my dad’s nursing home while embracing the heat, smells and sounds of Hialeah, takes me to a place that I find only on the map of the heart.

His favorite fruit is mango.

If he could still speak well, he’d remind me that everything tasted better in Cuba. Nostalgia for his birthplace affected his palate. “Eso si que era un mango,” he always said.

But today the conversation is brief.

My dad, who can no longer feed himself and often has trouble swallowing, takes half an hour to enjoy the milkshake, which I feed to him with a spoon. I often wonder what an extraordinary 30-minute journey this must be for him, bed-bound as he is in a small room.

Sometimes, he can barely muster up enough energy to open his eyelids while he eats, but as a mother knows her child, I know that with each spoonful, the memory of long-forgotten juicy mangoes suddenly flushes his senses.

This is our form of communication and our Hialeah moment in time. The mango shake, spoonful by spoonful, says “te quiero mucho, papi.”