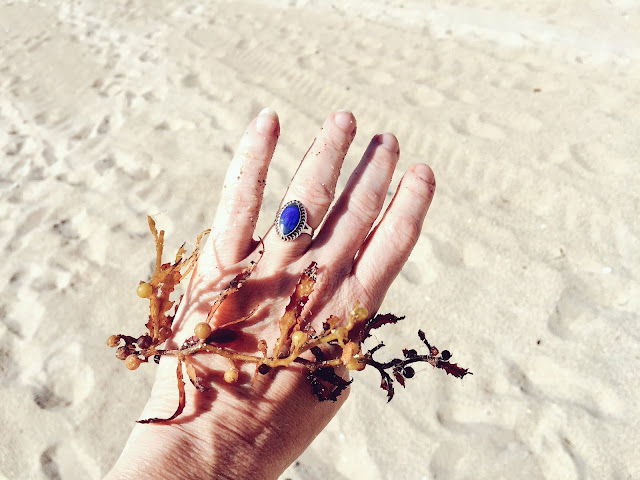 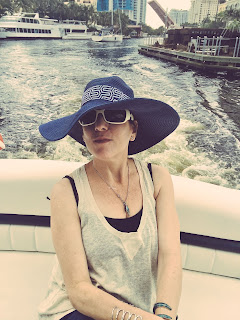 On the second day of my of journey, I was whisked away from Lauderdale-by-the-Sea to cruise Broward county’s Intracoastal Waterway aboard captain Mark Husk’s yacht Don’t Blink.

We met affable Captain Husk of My Yacht Experience at the dock located behind Bokamper’s on the Intracoastal, about three miles south of Lauderdale-by-the-Sea.

We cruised smoothly, feasting our palates on fresh fruit and our eyes on the spectacular luxury waterfront properties that line this body of water in the Venice of the Americas, so named because of the more than 300 miles of canals in the Fort Lauderdale area. I had seen these homes before when taking the water taxi around Fort Lauderdale from the 17th street bridge up the New River, but the Don’t Blink was fully a pleasure cruise. I sat back, enjoyed crisp mimosas served by Captain Husk’s wife and first mate, Nancy, and talked to the Captain about many a thing nautical. The service was impeccable but unobtrusive. They spoiled this jaded Miamian. 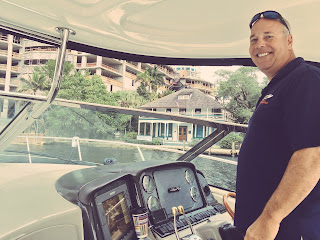 On the way back to Bokamper’s, I went below to the after berth to receive a phone call. The gentle movement of the boat lulled me into a brief but delicious nap. This wasn’t a speedboat with loud obnoxious music, the kind of which you frequently find on Miami’s waters. My yacht experience was all about relaxation aboard a delightfully comfortable vessel.

During the cruise, we fantasized about which home we’d call our own -- I was partial to Wayne Huizenga’s multimillion dollar estate on the New River and its bell tower featuring blue tiles -- but the simplicity of Lauderdale-by-the-Sea was pulling my heartstrings. I longed for a simple room by the sea. 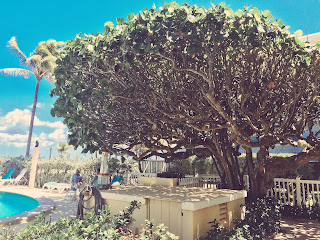 At Southern Seas, I got what my heart desired. A magnificent sea grape tree greeted me at this intimate, two-story resort. I held my breath for a moment: the only imposing structure between my body and the ocean was this native Florida tree. I thought about that for more than a moment: just one tree.

Years ago, when I lived in South Beach and construction cranes became more common than herons wading in Miami’s waters, I gave Miami Beach a new name: Beachhattan. At that point in the island’s history of unregulated development, the tide had turned. All anyone can see today at ground level is cars and concrete. The best views of the ocean belong to the one-percenters who live in their gilded towers. 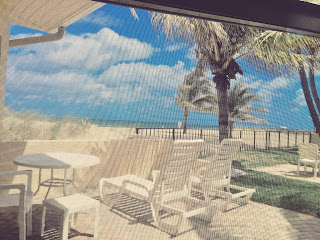 During the yacht tour earlier in the day, I had seen million dollar homes and concrete giants along the waterway. And here, at Southern Seas, all that invaded my senses was this tree, a few coconut palms, beach grass on the dunes – all residents of the plant kingdom who are perfectly at home by the shores of the Atlantic. The modest building seemed like a respectful afterthought to nature. “This is all I need,” I said. “All I need.”
My lovely room afforded me an unobstructed view of the sea and after some rest, I headed out to the beach where the only the only trash I found was a garland of seaweed. A gift from the sea.

I whispered these words into the wind: “This is all I need.”

Posted by Maria de los Angeles at 7:00 AM