You know how they say everyone has a gift to offer? YOU are a gift! Thanks to all for being part of an amazing adventure this year. I thought I had lost everything and gained more than I could ever imagine. 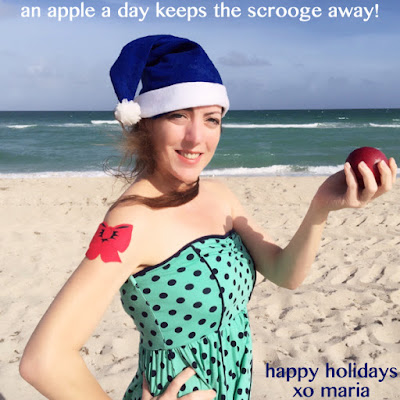 Red ribbon courtesy of Pastease. Yes, a pasty on my arm! They're not just for boobs. What else did you expect from Sex and the Beach? :-)
Posted by Maria de los Angeles at 4:26 PM No comments:

Romancing Italy at Via Verdi

A taste of rustic Italian cooking in Miami and some #vicequeenkitchen musings on tomatoes, mushrooms, octopus, olives, hazelnuts ... are you hungry yet? Read more.


When I first walked into Via Verdi earlier this month I felt like I had stepped into a little corner of Italy. I'm not quite sure what it is: maybe it's the covered courtyard or the cozy bottega filled with bottles of wine and boxes of pannetone. Of this I am sure, though: the soul of Italy is definitely in the food.

I first learned about Via Verdi when I stopped at their exhibitor's booth during the Seed Food and Wine Festival. The cold lentil salad was delicious; however, I told the gentleman behind the booth that it needed maybe a pinch more of salt. Little did I know that I was speaking to one of the restaurant's chefs! He looked at me wide-eyed in disbelief but I'm pretty sure there was no Italian family curse hurled at me; instead buon presentimento clicked and the food writer was invited to dinner.

Restaurateurs Nicola (the chef I met at Seed) and his brother Fabrizio (who is also a chef) come from the Piemonte region of Italy. They opened Via Verdi about two years ago and have a regular following of locals, including homesick Italians. I'd be homesick, too, if I were Italian and ate food like this back home.

"Are you sure we're not in some Italian fishing village?" I asked my sweetheart, who dined with me that night. I gushed further: "You can taste the sea!" Visions of cliffs studded with pastel-colored houses stacked above a deep, blue Mediterranean sea crossed my mind. My palate traveled far -- very far -- from busy Biscayne Boulevard in the MiMo District.

The grilled octopus was so tender and smooth that it melted in my mouth faster than it took for me to talk about how long it takes to cook. Grilling after boiling added a smoky flavor to the subtle briny flavor of the ocean. In all my culinary adventures searching for the best octopus (and often refusing to order it if it even looked rubbery), this one hooked me at first bite. I could eat this everyday. For a pescetarian, this is heaven.

I must be on to something. Fabrizio told me he often makes the same dish at home.

IT'S ALL IN THE TOMATOES


You can tell a lot about a restaurant by its tomatoes. A tomato that is treated as an afterthought is insulting to this versatile queen of fruits. A watery, flavorless tomato is a poor excuse for a real tomato.

At Via Verdi, all my tomatoes were spectacular. I imagined a minion working in the kitchen delicately and very diligently dicing and mincing tomatoes all day long -- tomatoes so delicious that I had to stop and put my fork down on the plate and say: "Dude."

Little cherry tomatoes came to my palate in various forms, including as a garnish salad for the above mentioned Polipo Ala Griglia, which was served in a light, lemony basil vinaigrette.

But even before we had our octopus antipasti, we enjoyed a few assagi -- small tasting plates like tapas to whet the appetite along with a classic Italian cocktail, an Aperol spritz. Here, homemade sun-dried tomatoes graced the Ceci -- a chickpea mousse served with Sardinian carasau bread, which is more like a wafer thin cracker. Other appetizers included Polenta sticks with a truffle parmesan sauce that was so good, it made my guy say "mmm" in a way that I only ever hear in private. A few "mmm's" were uttered in unison as we ate together.

The Tartufe -- a provolone-stuffed olive with a panko and squid ink crust -- is what I would call the Italian equivalent of a fried pickle. Made to look like a black truffle, the olive, which is fried fresh in the coating, packs big flavor and is the perfect savory accompaniment for a cocktail. I'd hate to call such a sophisticated morsel prosaic bar food, but it's definitely a delicious nibble that'd go great with a martini.

The Panzerotti seriously made me want to reinvent the arepa or anything else made to fry from dough. Fabrizio explained that they use less yeast and that the dough is cooled to rise for a longer time than other doughs. The result is a very light dough filled with melted mozzarella and dipped, you guessed it, in a thick, homemade marinara sauce that pays homage to her highness the tomato.

Fabrizio confirmed that I wasn't the only one obsessed with tomato purity. I mentioned that a tomato dipping sauce should never, ever taste like ground herbs in ketchup. It should taste like tomato, damn it, which is exactly what this particular marinara was -- nothing more, nothing less. One whiff or oregano or garlic powder and I'm turned off. All other sauces -- arrabbiata, puttanesca and so on, build upon that base of tomato-ness that is the foundation of so many dishes in so many cuisines.


For the primi course we tried two different pastas, homemade and cooked perfectly al dente. I made an exception to my pescetarian diet and tried the braised beef agnolotti, which had a rich, concentrated beef flavor that any meat lover would enjoy. The raviolis were light in texture. So were the tagliolini, which shined with hearty flavor of finely chopped mushrooms and more of that exquisite truffle parmesan sauce, which in this case, clung to the noodles. It's this dish that spoiled me to the cucina rustica feeling at the restaurant: Italian comfort food at its best.

For the secondi course, the pescetarian in me was once again transported back to Italy. The grilled branzino with salmoriglio sauce and broccolini, like the octopus, is something I'd eat every day. The  Taggiasca olives in the sauce hail from Liguria where they live in a barrel of silky olive oil until sliced and paired with -- you guessed it again -- more of those heavenly tomatoes. The tender sea bass had just a bit of crispy skin and danced on my palate with an earthy olive oil flavor that complimented but never overpowered the fish. Suddenly, I was wearing a peasant dress in Northern Italy, picking olives under the sun. Can you tell I love olives as much as I love tomatoes?

Even the broccolini had an important supporting role in this dish; it was just perfectly crunchy with a hint of spice from it being tossed with peperoncino, although there were no peppers on the plate. No sad, soggy or overcooked vegetable here.

If we both had just had fallen in love with this little taste of Italy, we fell a little harder with dessert. Interestingly, the appearance of chocolate made us forget how full we were from this wonderful repast we'd just shared. So to finish, the bunet of caramel, amaretto and chocolate was heady with the scent of hazelnut and as delicious as one of those interminable kisses by the sea in romantic Italian films.

Disclosure: For this dinner, we were guests of Via Verdi. The article was unsolicited. All opinions my own, as always.

Posted by Maria de los Angeles at 1:18 AM No comments:


My friend asked me to help him wrap presents for his daughter while he's out of town. I did it mindfully -- every cut, every crease, every fold -- peacefully and with a lot of love, anticipating the child's joy. I took my time.

I thought about this preposterous notion of holiday stress, which robs many adults of joy. Wouldn't it be better if we just gave ourselves the gift of time? Thanksgiving dinners that take days to prepare are swallowed in minutes. Gifts that are painstakingly wrapped take seconds to unwrap. The paper is torn apart swiftly, thrown away and then suddenly, it's over.

It's kind of a big deal. A miracle, really. And it all disappears into the big black hole of pressure we've invented that has nothing to do with Christmas.

Wouldn't it be better to have a holiday without so much -- oh, what should I call it? -- all this "muchness" that dampens the very spirit of that which we're trying to celebrate?

To let time expand instead of spiraling into a tight wad of stress -- that would be a great gift for all. So, I'm not going to wish anyone a happy holiday. I'm going to wish everyone a mindful holiday.

As I wrapped each gift, I thought about my inner child -- that adorable toddler with diapers bunched up under her pajamas, standing next to the Christmas tree with a mischievous smile and eyes beaming delight. There'll be no more Christmases for my family: no more mom, dad in the nursing home unable to tell the difference between one day and another and me, alone.

And then I thought about a gift I unwrap every day: dawn. And the blessing of an even greater gift, the present I unwrap every breathing moment of my life: the love my parents and I shared.

You can't put a ribbon around that love, yet it is binding and freeing all the same.

I can't wrap or unwrap my other human family, either, nor do I want to, because they are gifts that give every day: my sweetheart, my friends, the people in my professional life and YOU.

Every cut, every crease, every fold -- how are you wrapping the gift of your own life each day?
Posted by Maria de los Angeles at 9:01 AM No comments: