My Mother, My Heart 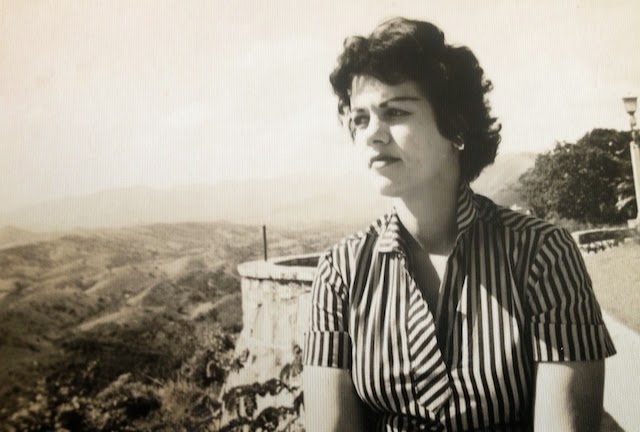 I choose to remember her as she was in this photograph, nearly a decade before I was born. In 1960, she was pregnant with my brother and she already had two daughters from her first marriage. But she knew, even before she married my father, that they'd bring a boy and a girl into this world. She named me Maria de los Angeles while they were dating.

I almost missed the journey in her womb. Or maybe I was biding time elsewhere. Waiting, just waiting. A faint glimmer in her heart until she gave birth to me, three children and three exiles later, when the family finally settled in Miami.

I also missed the political mess of Cuba when my father pressed the shutter. The revolution had just turned in favor of communism. Not long after she paused to capture this pensive moment, she would venture out of the island to an uncertain future.

What was she thinking, I wonder?

Could she foresee the life ahead of her? Could she know, that in spite of some hardships, she would -- by the time she took her last breath -- never lack for anything? Did she know that all four of her children would outlive her? That she would have great-grandchildren? That she would travel? That she would be married to my father nearly sixty years?

Until the specter of Alzheimer's reared its ugly face.

She lost her memory and then, all the good and bad times she experienced -- life's richness -- all slipped away. She died before she died.

The last form of communication I had with my mother was through music. She was breathing, but barely barely conscious in hospice care. I had composed a song for her, which I sang while strumming a small guitar with four strings, about sweet unconditional love -- a love without fear, a love without malice, a love that still overflows out of my heart even though her body returned to the good earth in the form of ashes.

I became a mom to my mom and we were so blessed to have known each other during this lifetime. I'm glad I waited. And I'm glad that the faint glimmer in her heart saw the light of day. Dar a luz -- to give to light -- means giving birth in Spanish.

Caring for you, mamita, was the most challenging yet rewarding blessing.

You took such good care of me and I know you are looking over my shoulder now -- there's a tickle where my angel wings would be attached -- and that you are giving me the strength and courage to open a new chapter in my life, to take care of myself and my father until the two of you meet again.

Of course, I cry. Of course, I miss you. But you left me with a great legacy -- a sense of peace and grace.

You are not far from me, mama. You are forever in my heart.
Posted by Maria de los Angeles at 11:30 AM 3 comments: