THONGOLA IS NOT A NATION

... but it should be. Oh those pesky thong issues! When Manola becomes president of the United Babes of America, the flabby arm of the law will proclaim: straight men will wear thongs to work and drink Rolling Rock beer! I just hope they don't fart loudly while carrying a big dick!

You know, come to think of it, if you are what you eat, aren't you also the kind of underwear you use to cover your naughty bits? Seriously, thongs are about as necessary and useful as botulism. We contacted existential philosopher Soren Kierkegaard via Ouija Board and after a few groggy yawns he confirmed that in spite of having lived his entire life in a stark black and white boring European independent movie, he still believed that thongs are indeed the cause of angst, nausea and malaise in modern society. "What is the hegemony of thongs? What is thongness? Are thongs things and if things are thongs what kind of thong thingy then?" Our conversation was interrupted by Jean Paul Sartre, who came back from the dead and proclaimed that it was a thong and in fact not a tree that made him want to puke on the streets of Paris.

Ah, just wait. When Manola is president, she will launch a campaign on the virtues of going commando.

Many internet surfers dump their page loads on Manola because of the word "thong" ... but "monster clitoris" still reigns supreme as most popular search term. Hey Don King, wouldn't you like to see Godzilla Versus Monster Clitoris? 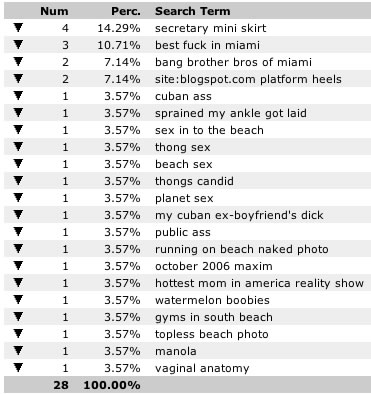 Who cares about Bang Brothers when you can lose sleep wondering what happened to a Cuban ex-boyfriend's dick? Not that Manola ever had a Cuban boyfriend, but she never really wondered about the fate of any man's dick. Seriously, you think about him, not his junk, right? It's not like the junk just packs a bag and leaves. It's not like you hear that special song in the old familiar places and ponder: hmm, I wonder how his penis is doing?

OMG, is Sex and the Beach becoming some navel-gazing blog that focuses on inane, sophomoric and scatological humor? No way. Manola would love to gaze at her navel, but "watermelon boobies" are blocking the view!