Lessons from the Garden 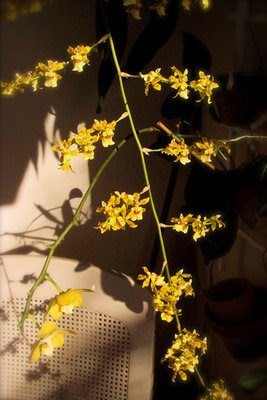 I wrote this story in 2005, several months before I started this blog. Obviously, I'm not in love anymore, but the person I mention in the last paragraph was Mr. Thinks He's Huge and the man I left was Sir Fish A Lot. It doesn't matter -- what matters is the story. And it would matter more if it gets anyone to think about the importance of love in one's life. It certainly itched my marrow today -- I say marrow because being single and out of love for a long time is like having an itch you can't scratch -- itch down to the bone.

Seven years ago, I found myself in a very uncomfortable situation. My ex- boyfriend and I, graduate students at the time, shared a house with a colleague who sublet a room in the spacious property we called home. But the lack of proper privacy, as well as the rental agreement, was the least of our problems. Our relationship suffered for other reasons, which I eagerly desired to put in the past. I anticipated the sigh of relief I would breathe in a place where we could pick up the pieces of our broken love, because it had shattered and was struggling to survive.

It was no coincidence, I am certain, that the house had an enormous, labor- intensive lawn, yet hardly any land suitable for gardening. I had planted some flowers in an area just in front of the porch and had potted a few plants by the pool, but that was the extent of the opportunity to exercise my green thumb.

One day, I heard about a cottage for rent that was a gardener's paradise. The cottage had a landscape where my imagination could go wild -- shady areas for ferns and bromeliads, sunny spots for marigolds and pentas. An enormous avocado tree shaded the northeastern side of the property, while other trees -- sapodilla, lychee, ficus and an array of palms -- made the dwelling a cozy, intimate space.

Soon after we moved into our would-be love nest, a place where we could start anew together and alone, I planted several types of vines, including passionflower. It would not be long before caterpillars devoured every leaf of that vine. Once they had entered the cocoon phase of their amazing metamorphosis, the plant looked like a surreal, leafless Christmas tree -- nothing but twigs with dangling cocoons as ornaments. My ex-boyfriend and I observed this process day to day. And I wondered, as well, if we were nourishing our own love and if it too would someday become something beautiful.

One morning, I stepped outside and was greeted by countless ruby-orange wings fluttering softly in the air. The caterpillars had eaten all those leaves for a reason and I became a witness to the most breathtaking moment of their life cycle. If I had been fussy and treated the plant with insecticide, I would have interrupted their cycle and would not have been rewarded with the sight of these gentle creatures. The butterflies taught me that some of the plants in the garden should be reserved for such special purposes. Surely, I would not let all my plants be decimated by pests, but I would at least give caterpillars the chance to transform into butterflies. I would let go of the ego's desire to prune and cultivate the perfect plant. Instead, I would let nature take its course.

Our relationship would also take its own course. As much as we enjoyed our home as a living space, our love, unfortunately, was not growing as bountifully as the flowers and foliage in my garden. Love, like plants, must be watered, fertilized, pruned, checked for pests and diseases on a regular basis. Love must not be over-watered because nutrients will be leached from the soil and its roots will rot. Yet love must be watered just enough, especially when its leaves are
wilting sadly from neglect. Love must be repotted when its roots have outgrown the container. Most importantly, love must endure the ravages of hungry caterpillars.

Early the following year, my ex-boyfriend kept dropping hints about an engagement ring. Nothing too obvious, mind you, but just enough to put my woman's intuition on the alert. On Valentine's Day he gave me an orchid instead -- a stunning oncidium with a flourish of yellow and garnet leopard print flowers. To my heart's surprise, I knew then that if he had proposed, I would have said no. I asked my sorrowful heart for an answer and it replied that our love had transformed into something genuine and real, to be sure, but not into a creature that could be called marriage.

When we left the cottage I also left behind most of my plants, since I was moving in with a friend who offered me temporary shelter while I gathered my bearings. Her apartment was large but had no balcony. I had to make a decision about which plants to take with me on this journey that would be the rest of my life. I took all my orchids and my most prized potted plant -- a bleeding heart vine that I would place on a sunny, outdoor stairwell.

Eventually, I moved to an apartment on the beach with a balcony. By then, the bleeding heart was very ill, convalescing from an unidentifiable condition that caused it to drop its all its leaves. Although the vine appeared to be dead, every time I would clip one of its stems, I could see that it was still green and vibrant within its dried-out woody exterior. So I waited patiently for nature to take its course once again. I watered it regularly, yet expected the plant would die on its own timing.

Many months passed before I noticed a tiny spot of bright green stretching out from one of the twigs. Within weeks, the plant was in full bloom once again, its thick spinach-like leaves serving as a backdrop for voluptuous bracts of tender white and red heart-shaped flowers. I wondered then if the plant had been mourning the loss of the relationship all this time -- a quiet, steadfast companion by my side -- because my heart had also dried and shriveled up with pain. When I witnessed the vine's slow yet steady perseverance, when I watched it bloom in spite of its temporary phase of illness and ugliness, I knew that I too could blossom and that a bleeding heart was better than no heart at all -- a heart that lives and feels and grows -- in spite of everything.

Recently, I moved to an apartment with a garden overlooking a canal. The bleeding heart is still with me and is ill once again, showing no outwardly signs of life, although teaching me, as always, lessons in patience. Another one of my plants, that fateful Valentine's Day orchid, still graces my sight. In seven years it has never bloomed, exhibiting a rare stubbornness, considering that all my other orchids bloom at least once a year. But I grant that orchid the right to bring forth flowers on its own timing because in the past seven years, I also refused to let love enter my heart.

I waited patiently for a new love. Happily, I have fallen in love again and in my garden, we hold each other dear.

As some of you may recall, I recently sold everything I owned and moved to South Miami with six of my orchids. The *damn* orchid is still with me. It bloomed once since I wrote this, but hasn't flowered since. And that bleeding heart vine? It died. But it was, I must admit, the most difficult, courageous and stubborn plant I ever took care of -- one I'll never forget.

Wow, that was quite a story, which I read on a break from my own gardening. ... Gardens have a way of explaining everything about life, don't they? Thanks for the great read.

The garden is the only place I think of nothing and just am...lovely.

I too know of flowers and of holding on to things stubbornly. I have most of my Poinsettias from Christmas past. I collect discarded, sad Poinsettias that people get bored off after the holidays. Like you, I also came to the realization that marriage to that person was not meant to be but friendship was going to be very rewarding.

I hope you are adjusting to life in South Miami, that you are happy and in love.