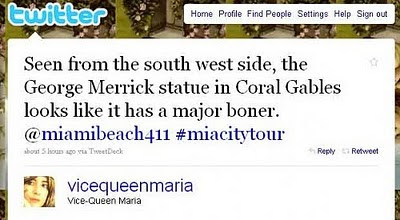 Of course, I had to live tweet the tour. This was my favorite observation.
As many of you know, I've been freelancing with Miami Beach 411 since 2006. Last year, several 411 contributors and I helped write and research a tour script for the company's latest endeavor -- Miami Tour Company. All of us who contributed were locals who had been living here for a long time. It was Miami as we saw it, peppered with historical facts and quirky trivia.

But in spite of this and the company's growing success -- they've recently added an additional bus -- I had never taken the tour I helped put together until last week!

You'd think that a jaded old Miamian like myself would be bored with a local tour, but actually I was pleasantly surprised. What separates this tour from others is that it's high-tech: a recording turns on according to specific GPS coordinates. In English, it's the pleasant voice of "Marjorie," who "reads" the script as the driver goes along the route. Also, this is not a kitschy, gimmicky script -- it's well-researched and while entertaining, gives a broad historical overview of the areas covered. 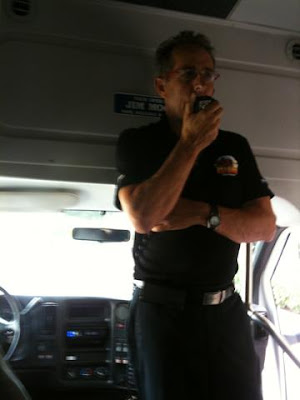 Jim, our affable and funny tour guide.
It's not just a recorded voice; our driver Jim supplemented the recording with his own humorous banter and nuggets of local knowledge. There's also music, which changes depending on the location of the bus and captures the flavor of each neighborhood.

The comfortable bus picked me up in front of Joe's Stone Crab. There were about thirty people and I could overhear voices in Portuguese, German, Japanese and Spanish. The couple sitting next to me had traveled all the way from Australia and I enjoyed conversing with them. One fella who chatted with me was a Londoner here for a geek conference.

We spent about an hour in South Beach, going up Washington Avenue, making a brief stop at the Miami Beach Botanical Garden and then traveling down Ocean Drive before heading out to Coconut Grove on the Macarthur Causeway. We then took I-95 to Bayshore Drive, checked out Vizcaya from the entrance and stopped by Mayfair for a 30 minute lunch break.

After lunch, in front of Miami City Hall, Jim regaled us with some very interesting stories about aviation history involving the former Pan Am Seaplane Terminal. We even caught a shoot of the TV show Burn Notice right in front of the Convention Center, which really thrilled some of the foreign tourists on the bus. 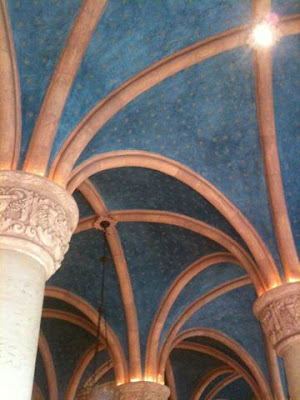 Don't forget to look up when you're at The Biltmore Hotel. It's one of the most beautiful ceilings in South Florida.
From there, we went down Ingraham Highway, passed The Kampong and headed to Old Cutler Road. We drove by the historic Pinewood Cemetery on Erwin Road, followed by additional Coral Gables exploration with some leg-stretching at The Biltmore Hotel. A brief stop at Venetian Pool segued into a Calle Ocho stop at Domino Park, where some of the tourists enjoyed a complimentary cortadito. From here, we concluded the Miami tour at Bayside, although some of the tourists continued on to the Everglades on the same bus.

After three and a half hours, we had covered quite a bit of territory and loads of information.

For me, it was interesting to travel down the same roads I see everyday while imagining what the experience must be like for someone who has never seen Miami. I usually avoid I-95 not because of traffic but because I absolutely love driving down Old Cutler from South Miami to get to Brickell or downtown. I never get tired of the lush, tropical canopy of trees. I hope the tourists on the bus could appreciate it for the first time just as much as I appreciate it every day.

I even learned something new: the location of the "secret" CIA boathouse in Coral Gables. Jim told us about it after giving us a brief history of Castro's takeover in Cuba. I can't tell you how many times I've driven over this bridge, clueless about the boathouse in plain view. 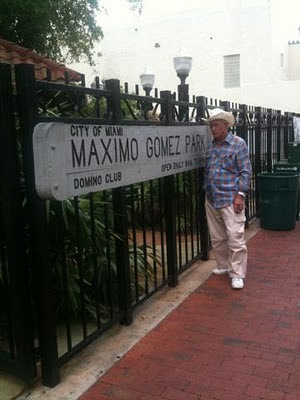 Little Havana is a little rough around the edges, but historically, it's a very important part of Miami.
The Miami City Tour is a fantastic way to familiarize yourself with many key areas of Miami west of Red Road (SW 57th Avenue) and of course, South Beach. It'll give you the lay of the land, which is practical for tourists and new residents. If you're a tourist, you'll glimpse points of interest that you might want to come back and visit, if you have time; and if you don't have time, at least you'll be able to say you saw some of Miami-Dade's most historic and beautiful areas. If you've recently moved into town, especially if you're beach-centric, the tour affords you a fresh look at the mainland and what's beyond the causeway.

For more information about the tour, pricing and schedule visit Miami Tour Company.
Posted by Maria de los Angeles at 10:39 AM