Trail of the Pirates: Interview with Captain Tom 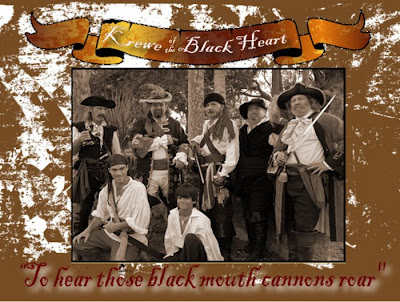 The St. Augustine Pirate Gathering grew from grassroots parties and events that began in the early 1980's with the Maiden's Pub Association, also known as Crew of the Black Heart. They were involved in producing the 2010 Buccaneer Bash, an evening party for grown-ups at the festival featuring food, drinks, music and dancing. (The Ancient City Privateers is a different group that organized the overall event.)

I interviewed Captain Tom, one of the founders of the Maiden's Pub Association, to learn more about the festival and the local pirate community.

SATB: How did this all get started?

Captain Tom: Back around 1982, a group of friends celebrated a birthday in pirate costume in the Jacksonville area with beer drinking, contests and a treasure hunt. It was so much fun, we did it again every year and eventually formed the Maiden's Pub, which was a "ghost" pub that would appear where ever we happened to be in port.

SATB: The words crew, crewe or krewe are used frequently to identify pirate groups. What exactly is a crew?

Captain Tom: A crew is a group of people who band together socially to do pirate stuff. The name of the crew can be fictional or historical.

SATB: It seems like a lot of work must go into putting together these pirate events. Does it ever stop being fun?

Captain Tom: In our first charter, we agreed to "if it stops being fun, we stop doing it." I stepped down as president because it started feeling like work to me and I actually wanted to enjoy the events as a guest for a change. Bryan took the reigns and I'm very proud of him.

SATB: The costumes I've seen are incredibly beautiful and elaborate. Are they expensive?

Captain Tom: A basic man's costume could easily run you about $1,000. You're looking at custom-made breeches, great coats, accessories and weapons. I have three outfits and six shirts. We save our finery for the Buccaneer Bash -- silk, feathers, leather boots and elaborate pistols. Women's costumes are even more expensive. Bodices are made with real bone, lace is hand-stitched and so on.

SATB: I couldn't help but admire the authenticity of the costumes. I mean, they're really more like "clothes" and not costumes. How detailed are they?

Captain Tom: The best costumes are accurate down to the stitching. Some seamstresses are "stitch nazis" who know exactly what kind of stitching and buttons would be historically accurate. But in some cases the information isn't being passed down to the newer generation of costume makers, which is a shame.

SATB: Maiden's Pub and The Pirate Gathering are much more than an excuse for revelry. How did you get into the non-profit arena?

Captain Tom: At first, we just wanted to be someone else for a day. But as we got older, we thought we would make this big and help kids learn what went on in maritime history -- everything good and bad. When we learned about the St. Augustine Lighthouse summer camp, we knew it was a perfect match. We now provide scholarships for kids to participate in educational experiences with the Lighthouse Maritime Archeological Program. This year, we gave out over 20 scholarships.

SATB: What other good works have local pirates done?

Captain Tom: The Pirate Gathering seeks to further history and education of the time period; it isn't just about pirates. And earlier last year, Peg Legs for Pirates helped raise money for victims of the Haitian earthquake who lost limbs.

SATB: There could be no better city to host a pirate festival than St. Augustine what with its historic Spanish quarter and fort. How do you feel about the new St. Augustine Pirate and Treasure Museum?

Captain Tom: We love it. With the museum, it really shows there were pirates here in the past. It gives credibility to what we do.

SATB: Where do you see all this going?

We want to keep it up and hopefully expand. I'd love to see it grow so we can pay for any kid who wants to go to summer camp.

Special thanks to Annie's Costumes, Visit Florida, Florida's Historic Coast and Hilton St. Augustine for supporting this part of the journey.