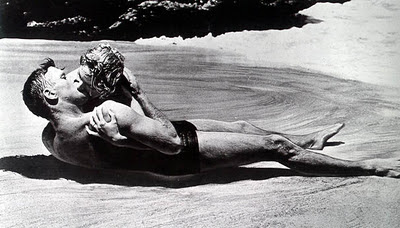 Sex on the beach looks romantic, but just think of all the sand up your ass. However, if you *must* have sex on any beach, try this one.
Every time I google Sex and the Beach, the sex on the beach cocktail comes up inevitably in search engine results, which is tiresome, for several reasons.

That little preposition makes all the difference in the world.

Sex on the beach, which sounds terribly romantic, is actually a gritty affair, putting many a human orifice to the test. Sex and the beach is so much better than sex on it ... so make sure you always grab your plush towel, cozy lounge chair or bed whenever canoodling seaside.

The original drink itself is too girly, like the punchbowl beverage you'd drink at a sorority hazing involving nothing more dangerous than taffeta -- what? vodka, peach schnapps, orange juice and cranberry? I don't think so ...

Here at Sex and the Beach, we like our drinks with a serious kick and mucho character, which is why, after a grueling three hours of work, fabulous mixologist Robert V Burr, his sidekick Papa Lazo and I came up with the best gin drink ever -- think tiki style with the botanical pleasures of this classic herbal liquor. In honor of the fact the we live in Miami, this kick-ass taste sensation was baptized Sex Y La Playa.

For my gringos, that's Sex and the Beach in Spanish, y'all.

Our mise en place. That's just a fancy French way of saying "get your shit together" before attempting any defiant act of mixology.

I could not have done this without my friend Robert. We've talked about him before here at Sex and the Beach. Check out Rum Renaissance Festival.

Papa Lazo came up with one of the subtle ingredients -- rose water. Effin' brilliant!
It's not drinking on the job; it's research! This cocktail was created after grueling experimentation at the super secret Rum Wreck Bar in an undisclosed location of Miami-Dade. It's by invitation only and it's where some serious cocktail magic happens. We actually studied several recipes, including a traditional Daquiri-style 1930's "Miami Beach" cocktail that featured gin. That recipe was from the Florida Bar in Cuba, where Hemingway used to wile away the hours over drinks.

Who says cocktail making isn't academic? There are books involved. You can even see I was taking notes on a napkin.

A page from a bartender's bible. Sex and, on, in, over, under, whatever ... will never be the same after this cocktail!

Why did we do this? Oh, because it's a tough job but somebody's gotta do it, plus we're entering a cocktail competition for Martin Miller's Gin called Trading Up, thereby giving this old "Sex on the Beach" hag a new facelift and boy does she look, taste and smell better than ever. It's like Joan Rivers blossoming into an ethereal virgin, keeping her wit, wisdom and sassiness intact.

I'm not going to give up the recipe in print just yet, but you can see our brilliant interpretation and execution in the video embedded at the end of this post.

Made with the freshest possible ingredients, Sex Y La Playa is a truly cosmopolitan drink, with many flavor profiles from around the world, capturing the essence of gin, which consists of many distilled wonders from the plant kingdom such as juniper, coriander, liquorice, cinnamon, cassia, nutmeg, angelica and orris root as well as orange and lemon peel. Adding a bit of eccentricity true to Martin Miller himself, the water used to produce this gin comes from glacial Iceland. You might even imagine Bjork serenading you softly as you take a sip.

There she is, Sex Y La Playa in all her glory!

The team: Robert V Burr, Yours Truly and Papa Lazo.
On this taste and scent journey, we also used Barritt's Ginger Beer and "Burlesque" bitters from Bittermen's. While international in nature, Sex Y La Playa is also a sensual tropical delight, featuring refreshing, effervescent Bermudan ginger beer and hibiscus as well as long pepper in the bitters -- all perfect, naughty complements to the gin.

I dare say there may be some aphrodisiac properties to this concoction, but I'll leave that to your imagination. It definitely makes a great apperitif to enjoy before a meal, but don't let me stop you from making this a pre-coital drink as well.

SIDE NOTE
We didn't plan it, but Robert is wearing a Blue Heaven tshirt and I'm wearing a Green Parrot Bar tank top -- two favorite places in Key West. It takes a village to create a good drink recipe: special thanks to the Burr family, Robert for his mad mixology skills, Papa Lazo for the ideas, my friend Gita for manning the iPhone video, Lakshmi for the company and of course, Martin Miller's Gin.
Posted by Maria de los Angeles at 12:23 PM