Peace Among the Ruins 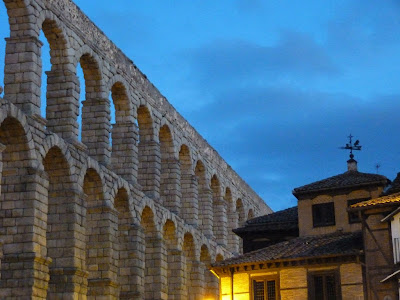 12 years ago today, I was having lunch with a friend in Segovia, Spain -- the medieval city above a hill where an ancient Roman aqueduct still stands. One of the castles where Ferdinand and Isabella reigned also commands the skyline. It's here the merchant explorer Christopher Columbus may have made his plea to fund his voyage to the Indies.

A few hours before the first strike, I had been standing before the throne and thought: "Oh my, it's from this heavy, velvet chair that the order was given. America would eventually be discovered by Europeans. How far we've come in such a short amount of time."

Spain was silent, as in most small towns, during lunch time. We found ourselves in a hole-in-the-wall restaurant right next to the cathedral. Being Spain, though, the establishment had a TV -- soccer games, you know. Like many people around the world, we thought the news station was broadcasting a movie.

I walked up to the bar and there happened to be a U.S. expat sitting there. "It's real," he said. "No joke."

I don't know how I managed to finish my meal but I definitely slammed my wine. I wasn't able to think clearly for a couple of hours until my friend managed to buy me a phone card to dial home. I was shaking. I couldn't even press the dial pad on the public phone. Of course, all lines of communication were jammed busy.

I wouldn't be able to talk to family and friends for hours and it seemed like an eternity.

Walking among the silent cobblestoned streets of this fortress town while Spain was taking its siesta made me think of war. These ancient stones assuaged my anxiety. They also supported my precarious gait. "The stones are still here," I thought. "They're still here, in spite of the bloodshed, destruction and hatred that has lasted for eons among humans."

I knew that the ruins of the twin towers would only mean one thing. In the aftermath, the ruins would reveal the resilience of our people.

It took me two weeks to get home, not just because of some social commitments, but also because of flight issues. Oddly enough, I felt no fear during the 8-hour flight.

Today is a reminder to find peace among the ruins of our lives, both personally and collectively as a nation.

Email ThisBlogThis!Share to TwitterShare to FacebookShare to Pinterest
Labels: 9/11, spain