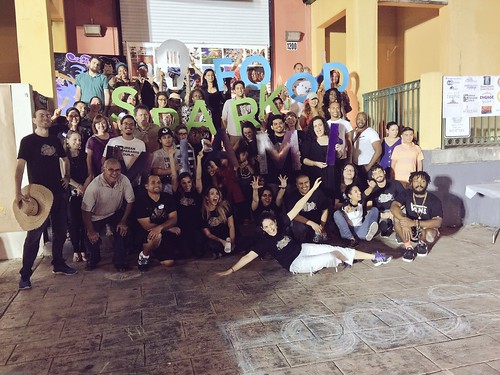 For any of you who’ve ever told me that Miami is full of fake posers who don’t give a shit about the city, kindly look past the bling and to grassroots movements that aren’t afraid of that road less traveled.

On March 12, 2016, FoodSpark Miami took over the abandoned Hialeah Tri-Rail Market train station, which to me seemed filled with ghosts of a world that never really existed. A would-be bustling center of transit and commerce lies lonely by the tracks, almost forlorn, sighing in anticipation of a better world that’s surrounded by a dynamic community of people instead of rickety warehouses.

Yesterday, the parcel of land came alive with fresh new energy as we gathered to talk about Hialeah over pastelitos and other local fare. Topics included stigmas about Hialeah, as well as recreation, arts and culture, transit, environment and more.

Some might say you had to see it to believe it: there are people who actually care about Miami in Miami, heck some are even born and raised in Miami. I was there because I’m one of them. Witness it yourself:

Kudos to Naomi Lauren Ross, the volunteers and participants who made it all happen. We're squashing that stereotype of Miami being a superficial fluffy town one event, one action and one smile at a time.

FoodSpark Miami is an initiative of Celebrate Diversity Miami, a large-scale community engagement initiative founded in October 2014 that aims to promote a deepened sense of connectivity between the culturally and ethnically diverse neighborhoods of greater Miami. It’s made possible in part by the K880 Emerging City Champions fellowship, a program of 8 80 Cities with support from the John S. and James L. Knight Foundation, as well as the 2015 Public Space Challenge, a program of The Miami Foundation with support from Baptist Health South Florida.