Memories, All Alone in the Moonlight

It is a testament to the sorry state of my love life that the only creatures who visit me late at night belong either to the feline, rodent or reptilian species. They're all furry -- or leathery. Well, combine them both and then you're talking about a man who has spent too much time on a Harley and/or a sailboat and/or putting on the latex. But I mean it: I'm talking critters, not homo sapiens.

Last night, while peeking out the curtain, I saw Mr. Possum poking around in my garden. My neighbor, the lovely blond widow who sleeps with her sliding glass door open, complained that her black cat -- the feline perpetrator of commiting the unspeakable crime of attempting to trap a small Cuban lizard in its jaws, only to spew it out after a few mouthfuls of pure torture -- such a meaningless act of death, dear Jesus -- couldn't be bothered by the entrance of Mr. Possum into neighbor's messy apartment.

"Oh, too jaded by that reptile experience, huh? Don't even get up from your lazy cat-ass when a huge rodent invades your care taker's apartment!!! Oh, cat, I have hair-raising circumstantial evidence ... and I take umbrage at your indifference ... I remember waking up to my neighbor's high-pitched blood-curdling screams during the Cuban lizard incident. 'Let it go! Let it go! Oh my god, let it go!' If Hitchock would still be alive, Rear Window would have had another plot ending, let me tell you."

But I digress ... seriously, while my neighbor screamed high hell, I thought she was being murdered. I woke up with the additional preoccupation that the usual panic attack actually had a real origin, you know, like maybe I'm an unemployed writer and the most romantic phone calls come from the bill collectors at 7 AM, and then someone was actually committing a crime, and not just providing me with foder for comedy. But no, this stupid-enemy-of-Scorpio-spawn-of-Satan cat is finicky about its prey. I don't like this cat. It sits on my terrace wall sometimes, in the dark. All you can see are its yellow, beady glittering eyes -- like the cat in Alice in Wonderland -- staring at you with a cold, spine-chiling stare.

Well, I REALLY digress ... Mr. Possum, remember, looked terribly warm and fuzzy, and I think he was lonely, because possum run in packs. Maybe he strayed from his gang -- a renegade rodent. If you're looking for a warm bed in my property, good luck, buster ... I don't care if you're an orphan!!! All pathetic beings, including unemployed writers, can call mi casa their soup kitchen.

FLASHBACK: I remember cooking chicken wings in the South Miami cottage where my second boyfriend and I lived, several moons ago. To keep the grease-stench out of our humble abode, and to avoid a major fire hazard (I kid you not, the interior walls of this cottage were done up in wooden shingles), I plugged in the electric deep fryer inside but cooked the wings outdoors. Next thing we know, while the oil was cooling to a thick, white congealed mass of cholesterol, a posse of possum appeared by the window, sniffing out that unmistakable smell of fried avian flesh. They were adorable ... a mommy possum and a complete litter -- sort of like Snow White and the Seven Rodents.

But more recently, in So Be, I've had close encounters of the other kind. 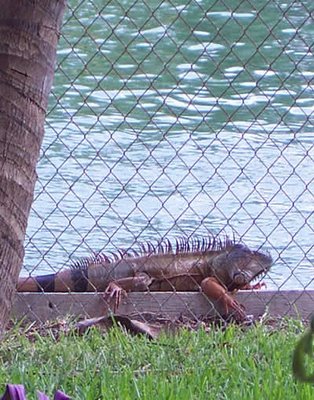 First, there's Mr. Iguana. He's mean, lean and least of all green. Orange and black stripes decorate his tail. He bobs his dewlap up and down like a drunkard having a hard time downing an aspirin. I love reptiles -- seriously -- as a kid, I wanted to be a paleontologist, one of my favorite movies is Jurassic Park and if I could adopt a velociraptor, I would, which I sort of have, being owned by a green macaw named Jalapeño -- but please, don't come as close to my window as Mr. Possum did last night. Furry OK ... leathery, stiff and bow-legged with a sticky tongue ... NO.

Then there's Van Gogh. Van Gogh is a one-eared tabby cat with a lazy-blue eye who decided to gang-bust the other strays in my neighborhood, while establishing his turf. If T.S. Eliot were still alive to write the Sopranos version of Cats, Van Gogh would definitely play the head honcho.

Stealthy and sneaky, he refuses to be photographed and evades even the most expert paparrazi, even when he throws VIP parties at a nightclub on Washington Avenue. Sometimes, you don't see him for days, and you think he's gone for sure, the headliner on the South Beach Road Kill Report, but no, you drive around the block, and there he is, selling crack to stupid bimbo pigeons, talking on his cell phone dealing drugs with the Russian mafia and performing money-laundering transactions from his blackberry.

When Van Gogh first moved into our turf, each night was a veritable symphony of meow! Apparently, one of the cats felt offended and threatened at his trangression of territory, but beneath this all this aggression you could sense the deep sexual tension. Next thing I know, Van Gogh and Lazy Cat are dozing peacefully on the chaise lounge of my terrace ... and narry a peep was ever heard from either felines to this day! In fact, they have even been spotted canoodling in the corner of the parking lot! Conclusion: who says you can't resolve your differences with sex? Especially when you don't have to pay for the motel room? 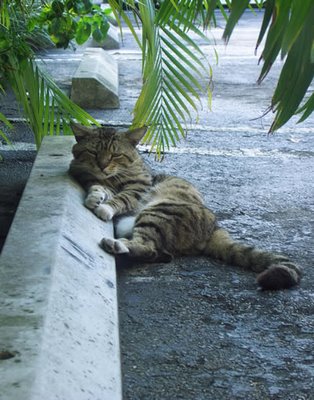