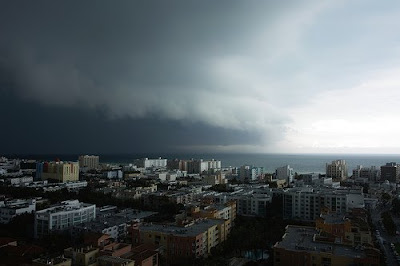 No mojito here. Perfect weather for a Dark and Stormy (rum and ginger ale).
Photo by Pelle B
We're about one week into hurricane season and Miami has already seen some epic storms blow through town, leaving South Beach more bloated than a hungover tourist, which proves once again that no one should ever be complacent about these crazy little things called hurricanes.

Last Friday was a weather reality check. Hail, pelting rain, lightning and quick, rising water took the barrier island by surprise and was less welcome than Kim Kardashian's camel toe, believe it or not. Multiply that by ten, and keep "Club Storm" open for a few more hours, and you have yourself a world-class weather disaster destination.

Oh, and speaking of things that should never happen (like camel toe), it seems that part of of a ceiling structure at the Fountainbleu Hotel collapsed, which makes us believe that Paris Hilton was the head engineer in the bazillion dollar remodeling project of this iconic Miami Beach property. Perhaps it was just pasted up with paper-mache and fake eyelash glue?

In any case, time will only tell how many hotels and condos are not built up to hurricane code, if the whole city falls apart after a couple hours of serious rain. Taxi drivers sitting on the roofs of their cars. Traffic backed up on the causeway for hours. Whew! A typical summer cluster fuck afternoon thunderstorm wreaks such havoc on Miami Beach ... imagine a threatening mass of horror looming over the Atlantic!

So in true South Florida fashion, instead of actually building safe structures at the edge of barrier islands and improving civic engineering, let's muster all our resources and avoid hurricanes altogether ... which brings me to the big announcement. Who shall be this year's Hurricane Season's Boyfriend? 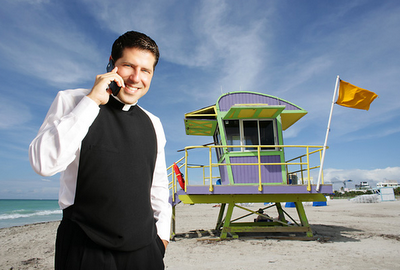 Just look at him! There he is ... it's so obvious he's got a private mobile phone line to G-O-D. He'll keep our beaches storm-free and the lifeguard stands standing!
Father Alberto Cutié, a man of the cloth who makes women stick their tongues out in hopes of receiving enlightenment, was caught in flagrante delicto by paparazzi while he was fooling around on a beach with his lover. The scandal broke about a couple of months ago, right before hurricane season. Coincidence? I think not. God does work in mysterious ways!

The holy man has since moved on and is spreading the word of God through the Episcopalian church, currently as a lay minister. Rumor has it he will also marry his lady friend.

You see, at this point, we don't want to prepare for hurricanes! We want a sexy hunk to actually pray to God and keep those suckers from reaching our shores. Good Lord! Even though we know Holy Papi Chulo is getting some, surely he's not succumbing to earthly delights every red hot second of the day. For Christ's sake, he's Father Alberto, not Ron Jeremy!

All of that celibate energy can go toward a good cause, so let's pray the hurricanes away. And who better to finger those beads against these menacing storms than someone who inspires tempests of passion in the hearts of devoted women?

And who are we kidding? Truth be told, in the real spirit of Christian compassion, we don't give a shit if the storms hit somewhere else, we just want to breathe that collective sigh of relief: "Whew, thank God it wasn't us this time! Holy Papi Chulo, crack open that wine and come minister to me!"

There are other reasons I chose Father Alberto. God has good taste and is a practical deity. Those nice biceps bulging through those crisp white cotton shirts? They're just just right for putting up shutters. But Holy Papi Chulo also has the gift of gab, which means he can rally volunteers and help those in need, like people who lose their homes in storms, as well as single sex-starved women -- you know, real emergencies.

And what's more, if the man was willing to engage in carnal knowledge on the sand (what? that's another way of saying Sex and the Beach, people!), what kind of blessed communion wouldn't he be willing to do during a storm? After all, if he can own his mistake in an act of contrition, 'fess up and marry his lady friend, he's already doing a lot better than some assholes out there who act holier-than-thou but don't have a blessed bone in them. Surely, this is clear evidence of God's handiwork!

At the very least, us single ladies can fantasize about this while the tiles are being blown off the roof. Look, what better cloth to hide under in times of peril? Call it the Frock of Ages.

I'll stop now ... before God strikes me down for bad puns.

I would like to thank those who nominated other great machos for this season. These were:

Lollicock
I nominate myself. I also accept the nomination and promise to do my hardest to be a good HB.
Yoli
Where is a picture of you and Vin Diesel?! With this much heat, you need a man who will be able to handle the Manola hurricane inside!
Mario
Manola, Your Hurricane Boyfriend has to be Father Alberto Cutie, everyone's favorite naughty priest....but you're going to have to share him with the beach woman.
Ashley Jude
If I was a gal, I'd nominate that wild and wacky Russell Brand or so intellectually funny Eddie Izzard to hunker down with. Brits are always good for this — funny, kinky, sometimes intelligent, like moi. And like a box of chocolates, you never know. . . Oh, and Hurricane Barracuda is a great name. But how about Hurricane Izzard? We just have regular quakes over here. . .so good luck with Hurricane season!
BohoPoetGirl
I nominate Dean Winchester from Supernatural on the CW- he can kill demons, he can certainly handle Hurricane Barracuda!
Christina
I nominate Johnny Depp - A timeless classic, at least in my mind. He is fiercely sexy, intellectual and quirky, all of which would culminate into hours of deeply passionate, creative..... conversation (get your mind out of the gutter! well, no, you know what I was really going to say) Best of all, he is from here, so he isn't afraid of any little hurricane!

Maybe I should look into becoming a priest.