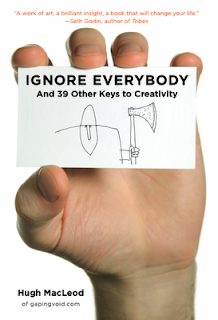 Today represents a career milestone for my friend Hugh MacLeod. June 11 is the official launch of his print book, Ignore Everybody and 39 Other Keys to Creativity. This 159-page hardback is classic Hugh -- words of wisdom and wit studded with his business card-sized cartoons.

The book is based on a series of blog posts Hugh published at Gaping Void, collectively titled How To Be Creative, which has been downloaded over a million times.

There's something to be said about seeing the old blog posts in the form of a book. It sure is nice to be able to hold these little nuggets of wisdom in your hand, which is a fitting product, considering that Hugh originally started out by drawing quirky cartoons on the back of business cards.

Rewind back to New York City, circa 1997. Hugh had a freelance copywriting gig that turned into a permanent job. In his early Manhattan euphoria, Hugh hung out in bars and drew on the back of business cards because it was a portable and practical art form: " ... there's a lot to be said for an art form that fits easily inside your coat pocket." He handed out his drawings freely, to anyone who was interested. And once back in the UK by 2001, he started blogging, sharing his art and writing with the world.

Hugh's book reads like a collection of sutras followed by an explication, often in the form of a personal anecdote. You can read this book from beginning to end, but you can also open up any random chapter, sit back and let the lovely thoughts linger, like a good scotch on your tongue. Return to the book, time and time again, for inspiration.

Hugh tackles the obvious subjects that shore up for many creative types: ignoring those negative voices (the ones inside your head and the ones coming from others), recognizing and honoring your creative passions, prosperity consciousness, loneliness, frustration, boundaries and most importantly -- sticking to your guns, being true to yourself, no matter what the obstacles or maybe precisely because of the obstacles.

Hugh encourages readers to develop their own "creative sovereignty," which is something I whole-heartedly believe in. If you are really driven to pursue your art, no matter what it is, you will find the way to do it and not dilly-dally with distractions: "If you're arranging your life in such a way that you need to make a lot of fuss between feeling the itch and getting to work, you're putting the cart before the horse."

But it does take time to figure it out: "The most important thing a creative person can learn professionally is where to draw the red line that separates what you are willing to do from what you are not."

I admit, it's easy for me to relate to everything Hugh says, because I'm in the same creative zip code, more or less. But that's besides the point -- what I love about this book is that it's refreshingly practical and accessible -- open up any chapter and you've got a nice little thought-provoking "aha!" moment, perhaps accompanied by a much needed "wake up!" slap on the wrist. Hugh's not coming from some lofty ivory tower, but from a real process of hard work and grit. He's not preachy; he's simply sharing what he has learned along his path.

It all boils down to being an efficient human, somewhere along the path of being creative and making a living. Hugh's book can be inspiring to many, even those who are not drawing or writing. The forty keys to creativity are applicable to many situations.

(By the way, Hugh continues to draw cartoons, but his work has evolved beautifully -- full size prints, some of which I've seen in person, are available for purchase online. My favorite so far is Fred 44. Oh, and he has also been known to draw cartoons on arms.)

Kudos to Hugh. We're looking forward to the next one!
Posted by Maria de los Angeles at 4:14 PM