Back to Miami, Part 2: Atlanta

A retrospective series on how I missed my trip to San Francisco and found my way back to Miami from Atlanta, traveling as a single woman alone, using only public transportation to visit friends and do some backyard tourism in Florida. 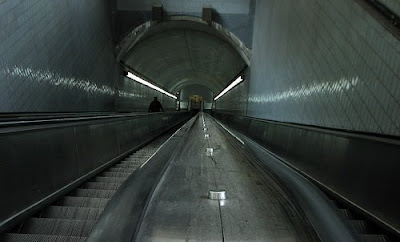 The escalator in Atlanta's Peachtree MARTA station surely causes a few stomach knots. Photo courtesy of mdxi on Flickr.
So, after being stuck in Atlanta's airport, I made a brief stop downtown before taking a bus to Tallahassee.

I was particularly impressed with Atlanta's public transportation and the general friendliness of people.

It was so easy to get downtown! I took the free shuttle from the hotel back to the airport. The shuttle driver dropped me off right in front of the MARTA station, which is one of many stops in Atlanta's citywide rail system. I purchased a one-way pass for an 18-minute ride to Peachtree Station ($2.50). At the turnstile, an official MARTA guide greeted me, asked me where I was staying or going, and helped me figure out my route. (No worries here -- Atlanta-Hartsfield is a final stop, so you can't possibly get on the wrong train.)

The railway was sometimes above ground, sometimes subterranean. At Peachtree Station, you can see all the black rock from which the tunnel was carved, which is kind of spooky, but also interesting.

And OMG, the escalator to reach street level was the steepest, scariest, longest-ass escalator I have ever seen -- worse than NYC or the Tube in London. There was no freakin' way I was going to go up or down this thing -- 190 feet at its longest length, according to Wikipedia -- which vertically would be about 19 stories! I don't really suffer from vertigo, but man, this was just crazy. My knees wobbled when I looked up this mechanical Mount Everest. It doesn't help that the tiles along the walls are laid out on the same diagonal as the escalator, creating an even more dizzying illusion of height.

Those of us who are handicapped or carry luggage have special dispensation to use one elevator. Yes, ONE elevator, as far as I could tell, for a station that must handle hundreds, if not thousands of people a day.

Do wobbly knees count as a handicap? Well, I did have a carry on with wheels . . .

But apparently, most Atlanta citizens are used to this. Later that day, back on the platform on my way to the bus station, I met a woman named C who has been working at the Chick-Fil-A in the Peachtree Center food court for over 10 years. When I passed by her, she smiled, sighed and gazed at me with that "I've had a long day at work" look. We instantly connected. I asked her if she took the escalator regularly and if she was afraid of heights. "I just stand sideways and don't look down," she said, cringing and shrugging her shoulders a bit.

We chatted until we arrived at my stop. I reached out my hand and she shook mine. "Next time you're in town, stop by Chick-Fil-A," she said. "I'll take good care of you." 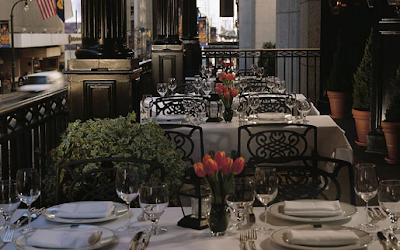 The Atlanta Grill at the Ritz-Carlton. Better than Hooters for lunch, (which was another alternative nearby) and actually, not really that much more expensive! Great service, too.
C wasn't the only friendly person I would meet that day. Earlier, when I finally arrived above ground at Peachtree Station -- the elevator ride was probably longer than a minute -- I met a uniformed tourism ambassador who helped me figure out where to eat and what to do in three hours.

I wish Miami had these kind of folks patrolling downtown and the beaches. And as for random strangers are concerned, I had not one, or two, but three friendly folk who stopped and asked if I needed help when I looked a bit lost. Miami: I think you might learn a little from Atlanta when it comes to public transportation and helpful residents.

The Peachtree area is a shopping, hotel and business district with some skyscrapers and a couple of quaint side streets lined with outdoor cafés. This hilly area is also home to the city's Ritz-Carlton, where I had lunch while sitting on a colonial-style balcony overlooking the main street.

I was about to take a Greyhound bus, so what the hell was I doing at a Ritz Carlton? Well, you know what they say, you can get more bang for your buck at a ritzy place if you go for lunch, and the Atlanta Grill hit the spot. Actually, had I really wanted to splurge, I would've had a hard time. The most expensive lunch entrée was less than $25 and my delicious $12 grilled chicken panini was so big, I had leftovers for dinner.

And besides, I just had to stop and rest in a quiet, uncrowded and peaceful place, where I could rest and use a comfortable restroom to freshen up. When you're a woman traveling alone through a city without a hotel, a quiet, well-lit, cool and comfy place to sit for a spell is important. Schlepping a carry-on suitcase during a hot Atlanta day was just not fun after an hour or so, especially with all those hills and bumpy pavements! My forearms were seriously starting to ache after my previous day's airport marathon, and remember, I was still recovering from a fracture in my leg.

After lunch, I eventually had to get to the bus. The tourism ambassador had explained that instead of taking a taxi, I could save money by getting back on the train (another $2.50) to Garnett Station, which is literally a few steps from the Greyhound bus terminal. The day before, the Westin hotel concierge (who was very helpful, by the way) told me to avoid this part of town by foot, but in that short distance between train and bus stations there was nothing to avoid really, so I felt safe.

Next up: traveling by Greyhound bus to Tallahassee.
Posted by Maria de los Angeles at 1:23 PM

Email ThisBlogThis!Share to TwitterShare to FacebookShare to Pinterest
Labels: atlanta, back to miami, travel

I've used Atlanta's system before. I was doing some business at a venue up there, and my flight was delayed by storms. Now, my hotel was right by the airport, and the venue was in their downtown area of sorts. A bit of a haul by cab. MARTA to the rescue. Right from the airport, to the venue, and back again. Total cost in transit under $10. Cabbing it would have been $100 easily.

you're right about cabbing ...