Back to Miami, Part 3: The Greyhound Experience

A retrospective series on how I missed my trip to San Francisco and found my way back to Miami from Atlanta, traveling as a single woman alone, using only public transportation to visit friends and do some backyard tourism in Florida. 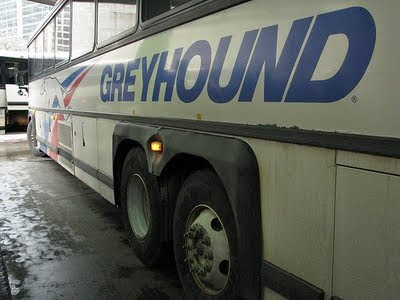 Photo courtesy of germeister on Flickr. Yeah, my trip did make me think about Midnight Cowboy's Miami ending.
It certainly is ironic to have lunch at the Ritz-Carlton Atlanta, followed by a six-hour trip to Tallahassee on a Greyhound Bus, but life is rich in so many ways, isn't it?

Other than private tours, I had never taken a bus in my life, ever. Nowhere. Not in Miami and not even in Europe. I wasn't quite sure what to expect, but in my mind I thought it'd be very riff-raff with supersize me people watching Jerry Springer on TV. (Oh gosh, that was just awful for me to say, wasn't it?) But in reality, it wasn't bad. After my experience at Atlanta-Hartsfield, taking a bus to my future destinations was actually more relaxing than the crowded cluster fuck that is a major metropolitan airport.

Yeah, it's the way po' folk travel in this country, but so what?

Seriously. Seats are no more tighter than your usual coach cabin, which is a can of sardines as far as I'm concerned. And though my bus rides were longer than flights, it was no more tedious than an airplane and at least we never had to deal with turbulence. Also, I couldn't say I missed the subpar customer service of airports these days. Bus travel had no frills, but heck, for the price, at least what I saw is what I got and I didn't have to deal with all the homeland security bullshit. I guess Greyhounds aren't prime targets for terrorists.

And it's quiet -- God bless America shhhhh! like the last refrain of Amazing Grace -- quiet. On one leg of my trip there was a baby on the bus that didn't even cry.

The drivers were great too. The first one, a brickhouse black woman whom even Mr. T wouldn't mess with, gave us a polite school marm schpiel that basically translated as: "No noise, no loud talking, no funny business, no bullshit, no cellphones, no booze, no hanky panky. Shut the fuck up and let me get you to your destination safely." Wouldn't it be awesome if this was part of a flight attendant safety routine?

The drive, which included stops at wayward bus stations I would've never seen, was quite peaceful. I enjoyed just going with the flow and observing everything that was not Miami.

And not having wifi or a internet access on my cellphone? I guess it was actually a good thing. It gave me time to stop and think, to sit with myself, to meditate on the bus, gather my creative energy, before I could write a little again. It forced me to be patient. It made me be in the moment. And that's what this trip was all about, really -- just being in the moment.

Plus, I met some really interesting folks.

One guy, a Latino Jesus freak who didn't speak a lick of English, was on his way to a Sarasota religious meetup. He tried to hook me. He so insisted on getting my phone number to convert my sinful ass, I thought he should be teaching pick up techniques in South Beach rather than preaching the good word of the Lord. And I thank God for this exercise, because I have never gotten rid of such a well-meaning leech in such a polite way. Sorry, amigo, but there was no fucking way I was going to give you my phone number! And good call on squeezing next to my seat after nightfall when the lights were out.

The passenger behind me on the way to Atlanta was a beautiful, plus-sized woman in her mid-thirties who was so big, she needed her own two seats. She had, however, the face and gaze of an angel. At first, I thought she was obnoxious because she kept on talking about taking percocet. But when I heard her story, I understood why. She had legitimate health issues and had been on a bus for 68 hours, coming from North Dakota, trying to start a new life with her relatives on the gulf coast after a horrific and ridiculously unjust custody battle with her ex. She opened up to me like rain in Miami thunderstorm. I do hope she gets her daughter back and God bless.

I took advantage of the $5 priority seating at each of my stops, which no, didn't mean I had saved up for my Greyhound lifestyle to get mimosas and warm hand wipes before departure. It meant I got first dibs for seats at the front of the bus. I was genuinely worried I'd end up sitting next to some smelly creep, so this was good. I know it sounds really snooty, but trust me, just like air travel, why wouldn't you pick the most comfortable seats if you could -- for only an extra five bucks?

Each leg of my tour cost less then $40, so my total Atlanta to Tallahassee and Tallahassee to Daytona bus adventure was less than $100.

I had a three-hour layover in Jacksonville on my way from Tallahassee to Daytona because the bus we were supposed to take had broken down. This was no worse, however, than being stuck at a friggin' airport. In fact, Greyhound gave us some meal vouchers for the station cafeteria.

The only drawback for the single woman traveler here is that bus stations can be in the skankiest parts of town -- you need a plan B if you get stuck. But in Tallahassee, for example, the station is right next to the local bus station and mere blocks from the capitol, close to hotels. This was a blessing, because my friend, the general manager of The Governor's Inn, had arranged for me to stay there upon my arrival. The streets of Tallahassee were dark but I only had to walk four blocks to the cobble-stoned and quaint street, where an open pub awaited me for refreshment.

Ditto in Jacksonville. You're right next to the city's above-ground rail system. And thankfully, when I thought I'd need to spend the night over in Jax if the bus didn't come, there were brochures for a concierge service I could call for orientation and hotel recommendations. We don't have anything like that in Miami, which is crazy, right? Why doesn't Miami have uniformed city ambassadors like they do in Atlanta and Jacksonville?

But yeah ... when I finally made it to Daytona near 11 pm, I ended up at a very unsavory part of town and God forbid I would've ended up staying there alone. Some stations close at night, even though buses make stops at them after hours. These stations are utterly deserted except for a few homeless people sleeping on the pavement and other sketchy characters. This wasn't pretty, gals. While I would totally do the Greyhound thing again, you really have to watch your ass if you're traveling alone, especially at night.

In Daytona, there were taxis there waiting for passengers, but my friend Doug from Miami Beach 411 -- who generously welcomed me to his home in Deland for a couple of days -- picked me up right away.

For the rest of my trip, I depended on the kindness of friends to pick me up or drop me off at Amtrak, tri-rail and only had to take a taxi once. I can assuredly say I made it from Atlanta to Miami without flying and without my own car. More on that later.

Next up: lazy days in Tallahassee, Deland and Fort Lauderdale.
Posted by Maria de los Angeles at 3:11 PM

Email ThisBlogThis!Share to TwitterShare to FacebookShare to Pinterest
Labels: back to miami, greyhound, travel

You should've given Mr. Jesus freak that pickup rejection phone line. That would've been a fun reaction to watch.

My friend Tamara wrote a piece on riding Greyhound 4 years ago:

Brings back memories. I've taken Greyhound before and enjoyed it as well. The terminals are in bad areas like you said. In Miami they used to have Trailways Bus which had a bus terminal in the lovely Coral Gables. What even happened to them I don't know? Actually in Dec. 1982 my boyfriend (now husband) took Greyhound from New Orleans to Miami. The Greyhound terminal was in Overtown. I told him I wasn't going to park, I was just going to circle and he can just look for me. I told him it was a bad area and he made fun of me for being such a wimp. That same day after I picked him up, the Overtown riots broke out because a cop shot a young black male because they thought he had a gun.

I will never forget my Greyhound bus ride to NYC. I had a guy fall asleep in my lap!

Love your blog, by the way!

If you're ever bored, I'd love to hear what you think about mine- www.pickmeupgirl.com

So, Manola, how did you like Clyde's? And staying in the Gov's Inn? Spiffy.

Thanks everyone for your comments and links!

Maria! I just saw this? I missed it between the hot fireman and the penis cartoon. Anywho..........omg! I took a Greyhound to SF from Indianapolis and back for "the experience". This was like 8 years ago? Maybe more. I shall tell you more someday!

Hey!
Im taking Greyhound all the way from Canada to Miami! Reading your blog was very pleasant, I hope my experience will be as good as yours! :)