Last Friday I attended the Florida Marlins Baseball Ladies Night. Now, y'all haven't ever known me to be a sports fan, have ya? But it just so happened that the hunks from the South Florida Firefighters Calendar were going to be there, so I figured this was one case where the NOL (National Ogling League) could support a spectator sport.

And you know what? I really actually enjoyed myself and could totally get into going to a baseball game again. Me, who had only been to one baseball game ever, and in that isolated case there was a lot of beer involved!

Kudos to the Marlins for hitting it out of the ballpark with this one. First of all, for 40 bucks per person (plus $10 parking per car) ladies get their own exclusive happy hour, which includes a free drink, DJ, chance at a raffle prize and more -- all at the club level, which is pretty swanky and air conditioned. Let's just say it doesn't smell like popcorn and stale piss up there. Seats are at the bullpen at the lower level, but that's fine too, just no a/c or Smirnoff.

Obviously there have to be vendors and at this particular event, some of them were particularly groovy. I met Yesenia Vargas, a fabulous makeup artist and some teachers from Elemental Studios, a pole dancing fitness outfit in Broward.

Marlins players made an appearance to say hello and so did the Manatees, an all-male dance revue team. The Marlins Mermaids may be cute, but these guys are something else! Even though they're just "regular" guys with day jobs and beer bellies, they can sure bust some serious hip hop dance moves on the field. Later, I was able to confirm this with my own eyes and ears.

Holy shit. A great example here of why the term "firefighter" is extremely ironic. These two might start a few under some skirts if you know what I mean.

As you can imagine, though, the big estrogen-inducing moment was the appearance of the firefighters, which was a special treat for this particular Marlins Ladies Night.

In true Miami style, the DJ announced the boys with reggaeton pounding in the background. As each calendar boy strutted in and ripped off his shirt, the ladies swooned in hysterics. The last time I saw women acting like that, I was at La Bare on 163rd street, had vodka shots spilled all over my cleavage and needed lots of change for a Benjamin. (If you can't guess what La Bare is, you shouldn't be reading this blog.)

And who can blame these women for having paroxysms of pleasure? Jesus Mary Holy Mother of God, I have never, ever in my life seen such a collection of amazingly sculptural male bodies in one place. They are true works of art, worthy of beholding and eliciting the most sacred of feminine secretions. Seriously. I went to Milan and saw the Statue of David in person. Sorry, Da Vinci, but that boy is a sissy compared to these guys. These firefighters whoop David's ass!

No, really. I swear. You won't find hotter men than these in South Florida. Not even at Score night club on Lincoln Road, which, after the Amoco gas station, is the next best place in South Beach to grab a six pack before midnight.

But you know what? It really isn't all about looks. (And by the way, they did keep their pants on. They were perfect gentleman.)

The firefighters in the calendar volunteer for the effort and are honestly passionate about the causes they support, which include: Here's Help, a substance abuse treatment program for teens and young adults; Local 10 Care Force, which is an all-purpose community outreach effort for families in need; Safe Haven, which helps desperate parents drop off unwanted babies, no questions asked; Habitat for Humanity; and more.

Ladies, do yourself a BIG favor and go visit these guys at one of many calendar signings coming up locally. For $16 you can get yourself some cheap eye candy of the highest photographic quality. You can also meet and greet the hotties up close and personal.

Believe me, this was so much better than meeting Ron Jeremy at Exxxotica. You can feel good about the whole thing because you're supporting some truly great causes and getting some awesome titillation at the same time. Do you think your boyfriends are doing such good work whenever they jerk off to a titty mag on the john? I DON'T THINK SO!

OH YEAH, REMEMBER THERE WAS A BASEBALL GAME GOING ON? 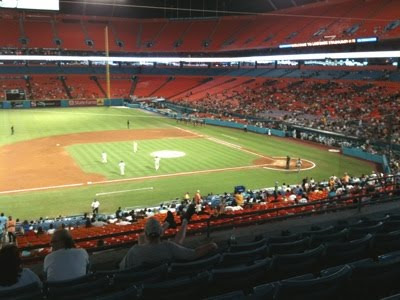 Club Level was kinda empty. Better than the nosebleed section though.
But back to baseball. Yes, baseball actually happened! The Marlins played the San Diego Padres and the Marlins lost. The stadium was pretty empty, which is kind of sad. It was a Friday night in August and in spite of that, the weather was pleasant.

Nevertheless, I was really surprised to see the variety of women at this Ladies Night shindig. There were young girls, teens, adults and even some grandmas. Mothers and daughters. Nieces and aunts. Women of all ages. It was a great gathering of gals.

One group told me they'd left their husbands at home because this was their special night at the ball game. And one particular fan, a young woman in her twenties -- wearing a t-shirt with every Marlins player's name handwritten on it -- told me she just loved the game and that this was a great chance to hang with her home girls. They come to as many games they can with half a dozen big homemade cheering signs in tow.

Most of the Ladies Nights gals -- at least those who didn't have season tickets -- ended up sitting behind the bull pen on the lower level, as per ticket requirements. Because I was on a media pass, I got to hang around club level, but I eventually moseyed on down there. Sadly, though, as I mentioned above, the stadium was so empty, I think I could've sat just about anywhere I pleased.

FOREPLAY JUST AS GOOD AS THIRD BASE

I did spend some time cracking jokes on twitter about baseball and sex. They ran on an order like this:

"Damn those outfielders have such a good grip on the balls it's like Velcro sex."

"Baseball is a lot like sex you only know something is happening if you look up after there's yelling or moaning."

But here was the best one:

"If sex were as slow as baseball lots of women would be really happy."

"And if getting it was as easy as getting Marlins tickets, lots of men would be happy."

Yes, baseball is really slow. A lot of twittering can happen if you're sort of hanging out by yourself. But sitting on the lower level was fun. I enjoyed the energy of people around me, which was guys and gals and kids all getting into the game. It says something that I, who didn't really know squat about baseball, actually paid attention. I found the experience very relaxing and can see doing this with some gal pals surely more than once a season.

As for food, well, after ordering a $16 cocktail, I asked the bartender where the best hot dog was and she looked at me funny.

"It's skinny and little," she said, scowling, lifting her pinky up to her mouth.

"Neither do I," she concurred.

But on the way back home, inspired by Carlos Miller and Burger Beast, I stopped at Royal Castle and got three sliders for three bucks; they satisfied the craving for some greasy ball park type food. Mind you, I don't recommend for a Cuban American honky princess like myself to hang out here late at night. There were so many pawn shops on 27th avenue I could've sold my vagina in Broward and gotten it back fifteen minutes later by Dade.

But heck I really wanted those damn sliders so there you go. Those sliders were so damn good and hit the spot. Fires weren't put out, but you know, they sorta hit the spot that gets hit when you don't hit the spot. Every woman in the world knows exactly what I mean.

Northwest 27th Avenue is a great way to go, by the way. Forget the turnpike. This was fast and had no tolls.

I want to thank the Marlins for a great night at the ballgame. Don't be surprised if you catch me at the stadium again soon. And ladies, don't knock the sport, just because you haven't tried it. Unlike crazy adrenalin-pumping football games, baseball gives you the time to sit back and relax, even if you're not into sports. You might actually find yourself amazed by what's going on in the field.

And really, if you're going to see any guys playing the proverbial field, this is the way to go.
Posted by Maria de los Angeles at 8:11 PM

I was always one to support the fire department, now even more : )