Local: Some of Them Stay: Interview with Miami Writer Jeremy Glazer 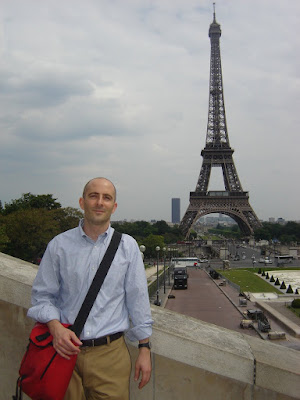 It was a breezy afternoon this past week when I sat down for coffee on Brickell with local writer Jeremy Glazer. Rush hour was upon us and suited executives were buzzing by on the sidewalk. But I was in no hurry; my eyes were rapt on Glazer, whose stories, recently published at WLRN's Under the Sun, prompted me to secure an interview. I just knew I had to meet the man who could write so beautifully about Miami experiences.

Glazer is one of those rare Miami natives who contradict every negative stereotype about Miami. He’s handsome, charming, intelligent, cares for the community and his heart seems to be in a really good place.

Born and raised here, Glazer set off for college in Massachusetts where he studied anthropology, lived for a spell in Guatemala and pursued grad school in Philadelphia where he earned his teaching certification. Had it not been for an unfortunate situation, this prodigal son may have never returned to the magic city. Sadly, Glazer’s father fell ill, forcing him to settle here.

Once back in Miami, Glazer worked as an English teacher in several high schools, including a rough one in Liberty City, but also elite schools in upper-crusty sections of Miami-Dade. He became involved in teaching as a result of his work in community development for Coconut Grove. Social service guided him into the role of a teacher. “I think education is so vital for our society,” he said. “The classroom is an important place to be. I fell in love with it. It’s as close as I’ve ever come to a calling. I’m my best self in the classroom. It's a real contrast to who I usually am.”

But the rigors of teaching also took their toll. “It’s a thankless profession,” he explained. “Teachers were not respected and I wore myself out. I admire anyone who can stay in the classroom.”

And Glazer wasn’t too happy with forced curriculum either. “There was too much test prep. It was all about FCAT.”

So Glazer’s career segued into local politics, where he’s been working as a legislative analyst for commissioner Katy Sorenson. After elections this month, Glazer will follow Sorenson to the University of Miami, where the Institute for Excellence in Public Service will help educate elected officials about the local community.

Well into the hour of our interview, I was eager, of course, to get the dirt on Glazer’s short stories about dating.

Mismatch.com, a tale of online dating gone bad, is based on a true story. Bad, really bad -- as in getting his crotch grabbed at a Design District club by a woman he had only known for a few hours. The experience was a killjoy and spoiled online dating for him. “I only go for online dating about one month a year,” he joked. “It’s like childbirth. You easily forget how painful it is until it happens again.”

And as he’s already tried online dating in 2010, his quota has run out this year, leaving this bachelor to brave the thorny terrain of singledom in Miami without relying on a service.

Glazer has been doing the single thing for a few years now. In another life, he enjoyed a long-term relationship with a woman he met in the northeast. When I teased him about not finding love in Miami, he laughed: “Yes, I had to import that one from New York.”

Another short story, They Always Leave, is fictional but strikes a raw nerve for its realism. In a nutshell: the main character meets an interesting woman on a bus; has a four-month relationship with her; and it ends as she dashes off to to Chicago. There wasn’t enough in Miami to hold her interest here, not even the main character’s heart. The breakup happens on a bus in South Beach:

My boss wants me in Chicago. They’re scaling down in Miami. It’s just not ripe yet. And to be honest, I jumped at the chance. . . . I need to be back in a city with a real Chinatown. A city where the major cultural event of the season is not a dog Halloween parade.

On the subject of fiction versus non-fiction, Glazer noted: “emotional truth is more powerful than fact.” And it’s true – whether or not any of this actually happened to Glazer is irrelevant. I think it’s safe to say that the story resonates on an emotional level with anyone, male or female, who has dated in Miami.

Dating is challenging in any city, but Miami is particularly hard. “There are a lot of different Miamis in Miami,” Glazer observed. “It’s hard to find fellow residents. Gathering places tend to be clubs instead of open, public spaces. But what if that’s not your thing? There’s no Central Park or subway, where you are bound to see hundreds of people each day. Miami is not a participatory city in that sense. It separates people.”

No better proof of this was the condo canyon of Brickell where we were sitting – all buildings with interior lives and no pedestrian friendly plaza in sight.

Drawing from his background, Glazer looks at dating from an anthropological perspective. The process can be educational. “Dating is a window into cities,” he said. “It’s interesting to see how people feel and react.”

His favorite Miami-Dade city is Miami Beach, where he’s been living since 2002. “South Beach feels like a real city,” he explained. “All these different neighborhoods are crunched together. There’s the old Miami there, the tourists, and being able to go to the ocean in the evening helps me wash the day off after work.”

Although Glazer hasn’t had that much luck with love in recent years, he certainly has had a love affair with words. Writing wasn’t always in Glazer’s career, though he did start out young. “When I was a little kid, I liked to write anything creative,” he recalled. “My mom taught me how to type because I had terrible handwriting. My first typed story was about baseball because I was really into that at the time.”

As a teen, Glazer attended Coral Gables High School. Amy Scott, a teacher and mentor, inspired him to write. Though his career path would initially focus on teaching and public service, that inspiration evolved into the writer he is today. Glazer has written a novel called Catching Holden, which follows the lives of a high school student and teacher over a period of a week as each tries to figure out who they are while reading J.D. Salinger’s novel, The Catcher in the Rye. Currently, Glazer has an agent and is looking for a publisher.

“It’s a split narrative,” he explained. “I told myself I would write every day, and this is what came out of it. When writing is going well, it’s magic. Those are the best moments.”

Let’s hope Glazer has more of those moments. Miami deserves a great, fresh voice to document the contradictions of a city that confounds and fascinates people from all over the world. As he puts it in the short story Home: “A Fellini film of a city.”

Note: Coincidentally, Glazer and I went to the same high school, knew the same English teachers and several people in common, but being a few years older, I never crossed paths with him, until now. Oh and Amy Scott was one of my best friends and colleagues in graduate school. Neither Glazer nor I were aware of this when I contacted him. Such a small world Miami is ... really.
Posted by Maria de los Angeles at 6:29 PM

I like this guy's stories. But, seriously, what's wrong with a girl grabbing your crotch 20 minutes into a date? I mean, if she's mildly attractive, that's like best case scenario right there.

I'd love to read this guy's take on the typical Miami male.

If he's still single, I would be interested in meeting him. Sounds like a nice, down to earth guy. I'm a Miami native, Palmetto High grad, and totally over online dating.