News and notes about the South Florida social media and blogging scene, with a little tech thrown in for good measure. And maybe some other random events, too. 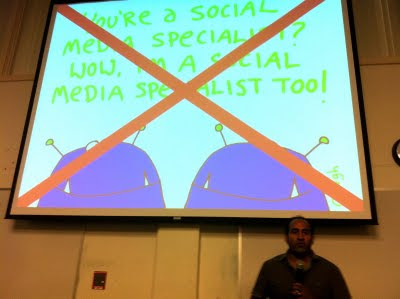 Rohit Bhargava with a great Gaping Void cartoon on display.

Rohit Bhargava, reknown author on the subject of social media marketing, gave a great presentation at this month's Social Media Club South Florida meetup this Tuesday. Bhargava is the author of the Influential Marketing Blog and the book Personality Not Included. His new book, Likeanomics, is scheduled for launch in early 2012.

The room at Nova Southeastern University was packed with social marketing pros and people just wanting to learn (Social Media Club events are always free and open to everyone). Bhargava touched upon some of the basic ideas behind "likeanomics," which begs the question: "how can brands survive believability in an age of constant manipulation?"

"Trust is deteriorating," Bhargava said. "It's harder to convince people to believe in things these days."

"Social media isn't enough," he continued. "Often it is a distraction."

I think I would agree that any good marketing strategy employs all the tools at its disposal. As well, Bhargava reminded us of what we already know, but may often take for granted: "storytelling is the most powerful form of communication."

In a funny slide, Bhargava stated that most people would rather work with a loveable fool than a competent jerk. Think about that every time you hit the Facebook "like" button. The presentation reminded me a lot of what Guy Kawasaki is also saying in his book Enchantment. It's important to be enchanting and likeable these days ... but, how to do it?

Bhargava gave a few examples. Oprah Winfrey was honest about her history with abuse. The Hans Brinker hotel in Amsterdam readily admits it's the worst hotel in the world. The Dyson guy is just so damn straightforward about vacuum cleaners.

One of the things that stood out in Bhargava's presentation was the idea of being "Authentically Unselfish." In the video below, I asked him about that and how bloggers can apply it to their own craft.

The Startup Forum is putting together a Social Media for Startups program on August 16. Ten bucks gets you in for some great advice from Alex De Carvahlo at the MiamiShared co-working space.

There'll be a fun tweetup at one of my favorite South Florida restaurants, Timpano's, August 25 starting at 5:30. It's on a first-come, first-serve as far as the freebies go. I'll be there with Social Chats and South Florida Food and Wine. If you've not had their mussels and martinis, you don't know what you're missing.

Tedx Miami is doing it again on September 13 at the New World Symphony Campus. Trust me, it'll be the best $50 you'll ever spend in Miami. If last year's event was any indication, this year's will be just as intellectually intoxicating.

Go up to Palm Beach on September 17 and pedal your ass off for a kid with cancer at a cycling studio. If you do decide to do it, make sure you tweet with the hashtag #pedal4kidscancer.

The first ever "Sea Tweetup" is taking place in November and organized by a group of local cool folks -- Soul of Miami, Aubrey Swanson, Sebastian Rusk, Social Esquire and I Am Jeff Cohen -- as well as one of Sex and the Beach's favorite travel writers, Rich Tucker from Cruise Source. There's supposed to be eight hours total worth of complimentary wi-fi during different times of the voyage for your twittering pleasure and cabins start at just under $300. The Norwegian Cruise Line ship departs Port of Miami for the Bahamas on the 18th. Visit the Sea Tweetup Facebook page for more information.

I love your martini holding interview with Rohit on likeabilty/social media. For a brand and business, "being likeable/personable" is one of those "it makes sense, I get it" but it's pretty hard to do. Couple of things that might help is 1. sharing stories about your business or yourself as a business owner 2. using pictures 3. offering to help/helping 4. finding what sparks interest in your community (mofongo in @nataschaos's case) 5. checking out personable accounts to get ideas for a style that might work for you and your business. It's funny I have had way more success doing this for other brands than my own. This post game me stuff to think about. I appreciate the GigCoin shout out. I need to find my own "mofongo". Hope to meet-up again soon.