A very international experience in Miami, in which I attended a Scotch whisky tasting and a reading from a historical romance novel set in Scotland – all on the same night. Read Part 2 here. 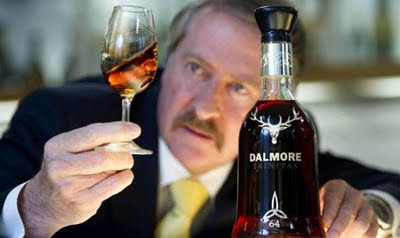 The indefatigable Richard Paterson, master blender for Whyte and Mackay Distillers, Glasgow. We met at Fleming's in Coral Gables earlier this month.

As the author of Sex and the Beach, I have been to many spirit tastings and liquor events (yes, it’s a terrible job, but someone’s gotta do it), and none have impressed me as much as meeting master blender Richard Paterson from Whyte and Macay Distillers in person to sip glorious spirit from the Scottish highlands.

Blending Scotch whisky is no easy task, requiring a razor sharp, almost bionic sense of smell and a keen understanding of the land where it’s produced – a connection to every grain of barley, ever handful of earthy peat and every drop of fresh river water in Scottish terrain. It is, as I was to learn, a rather sensual profession. Another “tough job” someone has to do and God bless Paterson for that.

Scotch is definitely not a girl drink. Can you imagine Carrie Bradshaw from Sex and the City ordering a neat scotch instead of a Cosmo? Scotch was the kind of thing Mr. Big would drink. It’s a guy’s drink, your father’s drink, your grandpa's night cap, Mad Men ad exec closing a business deal drink, genteel men excusing themselves for cigars and post-prandials as the ladies go play cards in the parlor room drink.

Or so I thought.

Paterson presented scotch in a way that never occurred to me. We’re used to words like “body” in tastings but I’d never heard “long in the mouth” or “art of swallowing” or “multiple orgasm” anywhere outside of a tantric sex lecture.

Paterson, whose ebullient personality betrays his passion for Scotch, encouraged us to slow down much like a yoga teacher would in this style of drinking.

“Hold it in the mouth for at least 15 seconds,” he recommended. “Taste it a second time as you swallow. We’re all in a hurry. Take time to sip and savor.”

When I asked if Scotch was always enjoyed in such a sensual oral ritual, he replied without hesitation. “No, people used to knock it back like cowboys.”

There’s a legitimate, scientific reason why Scotch shouldn’t be consumed like wham-bam-thank-you-m’am.

In this case, the spirit on our tongues was from The Dalmore, an exclusive single malt produced in a distillery north of Inverness at sea level on the shores of the Firth of Cromarty. This whisky had been sitting in different casks for years, bespoke barrels that in turn, probably held sherry from Spain or bourbon from America for many years prior. A lot of time -- and a very patient, biochemical process -- passed between that grain of barley sprouting from the ground and that golden liquid slinking down my throat.

I wasn't just downing booze. I was taking in history.

Why rush through it?

The metaphors continued in a philosophy that I genuinely liked, because it was so damn sensible. There's something very organic and yummy about it. Just as in life and with people, so with Scotch -- you never want to rush into a relationship.

“I treat whisky just like I would a person,” Paterson said. “I get to know them. I say hello, listen and communicate with them.”

There are sensual receptors in our heads – the mouth, the tongue, the nose and the eyes – all in service of the spirit you’re about to swallow. “The Scotch has an inner world,” he said. “Let it open up.”

When asked if women would make better Scotch drinkers than men, Paterson answered with a decisive yes. “It’s the same as buying perfume. You don’t just accept it right away,” he replied. “You let it sit and get to know it.”

“Women are more apt to listen and pay attention,” he continued. “In fact, women will add less water to Scotch. A man is a pussy compared to a woman.”

This impeccably dressed Scottish gentleman, with such elegant aplomb, had me in stitches when he dropped the "p" word! Good Lord, he’s serious about his Scotch and doesn’t mince his words.

But most of all, it was fun. Paterson suggests you try Scotch as a flavor adventure for the palate, pairing it with chocolate, coffee and crème brûlée for that “multiple orgasm” experience, which he explains rather jovially in the two videos below.

Sorry the video was cut off ... more here.

I don’t know … I think I’d rather drink my dram of Scotch with just a wee drop or two of pure water, but that’s because even food seems like a distraction from something so fine. Anything that tastes so good and simulates a long, drawn out foreplay works well for me.

Dalmore is a single malt, which means that it is only blended with other single malts from the same distillery in the Highlands producing Scotch since 1839. Dalmore has stocked some of the rarest Scotch in Scotland, making it high couture of liquor. The Dalmore Trinitas sold for approximately $150,000 including VAT at Harrods in London in 2010.

But you can buy other Dalmore bottles at Total Wine in Fort Lauderdale for far less ranging from $49 to $149 for the 12 year old, Grand Reserva and 18 year old expressions. Other outlets include major South Florida liquor stores and many cool Miami cocktail spots that get a thumbs up from Sex and the Beach: Fleming’s, The Local, Van Dyke, Tobacco Road, Transit Lounge, Soyka, Brickell Irish Pub, Segafredo South Miami, to name a few.

To learn more about Scotch history, pick up a copy of Paterson’s book, Goodness Nose, co-authored with Gavin D. Smith. Paterson is a third-generation Scotch whisky professional, so part of the book focuses on many of the tedious ups and downs of the business over the years. But the book is also a travel memoir; especially seductive are Paterson’s travels through remote Campbeltown in Kintyre and the Isle of Jura. I wanted to book a flight as soon as I closed the back cover of the book.

Next up: read A Sexy Scottish Affair, Part 2. And by the way, Jason Korman over at Gaping Void has some interesting thoughts on Scotch and the marketing industry. Read more at The Market For a Scotch to Believe in Is Infinite.