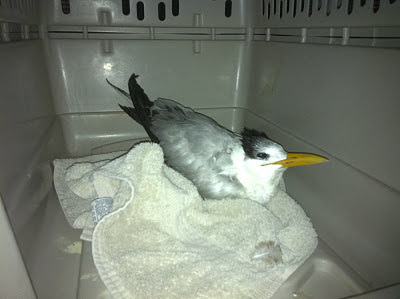 It seems like bird rescue has been in the air lately. Rick from South Florida Daily Blog paid attention to a restless, pacing mother duck outside his home and realized her ducklings were caught in a sewer. Pembroke Pines Fire and Rescue scooped the ducklings up with a net, but Rick reunited them with their mother.

Last week, I was walking at Matheson Hammock Park when I spotted a royal tern standing solo in a puddle of muddy water. Unusual, I thought. It just stood there, not preening, not drinking, not fishing for minnows with its beak. And where was its flock?

I knew then something was wrong. I tried to shoo it away (a bird like that is easily spooked and will fly) when I noticed it couldn't go far on the ground with out plopping its breastbone down when trying to spread its wings.

It looked fine on the outside and the wings spread normally. Perhaps it had some internal injury or illness.

I knew then I had to cut my walk short and rush to the Pelican Harbor Seabird Station. My first reaction was to get a box from the Red Fish Grill to transport the tern, but the restaurant was closed on Monday. Then I looked around in the garbage pails and sure enough, there was a cardboard box, just the right size.

It squealed at me when I tried to grab it, but I eventually held it gently, put it in the box, which I snuggled into the front passenger seat, covering it partially with an old car rag so the tern would feel secure.

The tern was quiet during the ride. I could hear it shuffling around but it never uttered a sound. Once I arrived at the station about 1 hour later -- it was rush hour -- the staff was gone, so I left it inside one of the carrying cases outside.

I called a couple of days later and the tern wasn't doing so well. I hope he made it.

I don't know why, but I am always finding injured birds. The tern's eyes were pitch black, so dark yet I could feel it speaking to me with its gaze. The innate intelligence of birds speaks far louder than words. I'll admit, I cried a little. I'm sure it was hanging on and in pain or maybe beyond pain, resigned to this surreal experience.

Animals should always bring compassion out in us. There was nothing I could do but try to help this poor creature. I delayed my evening plans. Everything else could wait.

If you find injured wildlife in the South Florida area, contact the fine folks at the Pelican Harbor Seabird Station, who are devoted to the rehabilitation release of sick, injured and orphaned wildlife in and around Miami's Biscayne Bay. They accept all injured wildlife, including mammals and reptiles, but no dogs or cats. Injured animals can be dropped off 24 hours a day, 365 days a year. Call 305-751-9840 for more information.
Posted by Maria de los Angeles at 12:16 AM

From comedy to animal rescuer... what a blog.

Good job, proving again that "one good tern deserves another."