If you thought getting into a South Beach club was difficult, try being a Burmese python with Ron Rozar around to check you at the door. It just aint gonna happen.
One of my favorite places to stop on my way down to the Keys is Alabama Jack's on Card Sound Road, where conch chowder, fritters and beer can be savored among the mangroves. Card Sound is at a fork in the road to the Florida Keys -- veer east from the Last Chance Saloon and you skip the U.S. 1 18-mile stretch between Florida City and Key Largo to drive through a crocodile refuge.

The American crocodile is welcome here, but another reptile is not -- the Burmese python. Since 2007, 14 specimens of this invasive species have been found in Key Largo alone.

On a recent trip to Key West, I went off the beaten path once again, this time stopping to chat with Ron Rozar, biologist and herpetologist for the United States Geological Survey (USGS), which has set up office at the Crocodile Lake National Wildlife Refuge. The refuge is part of the United States Fish and Wildlife Service and protects one of the largest remaining tracts of hardwood hammock, a globally threatened habitat.

If you're a Burmese python, you don't want to mess with Rozar. Ruggedly handsome yet soft spoken, he's a sophisticated Crocodile Dundee of our South Florida backyard, helping restore the Keys ecosystem to its natural state.

According to Rozar, the USGS is one of a few organizations in the world with snake management experience, with a case study in Guam that serves as a cautionary tale for Florida.

Sometime after World War II, the brown tree snake from Papua New Guinea made its way to the island where there were no indigenous snakes. It didn't take long for the invader to decimate native species. The USGS intervened in the late 80s.

"By then, all the birds had disappeared," said Rozar. "It ate every bird species, one-half of all lizard species and three bat species on Guam."

A similar invasion would be devastating to South Florida's environment.

Sorry tourists and locals, but the refuge is off limits and that's a good thing for the animals. There is, however, a lovely tiny butterfly garden on the premises that you can roam and humans are always welcome at Alabama Jack's, about 20 minutes away across the Monroe county line.
The first Burmese python on record in South Florida was discovered in 1979 in Everglades National Park, but the population didn't shoot up until the late 90s. "Founding populations are low," explained Rozar. "Then they hit a threshold point when males and females find one another and start breeding."

One infamous Everglades python made the news in 2005 with a shocking photograph of a gator piercing through its gut. (See the photo at National Geographic.)

With the 2007 appearance of a Burmese python in Key Largo, USGS sent Rozar down from Miami in 2008 to deal with the problem.

That 2007 python wasn't found randomly. Researchers conducting a telemetry study on endangered, native wood rats found two of the tagged furry critters dead inside a python's belly. There are only about 200 Key Largo wood rats in the world, indigenous to the north section alone -- a very small and specific biological niche. 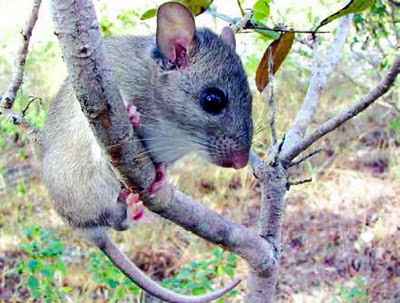 This cute little critter might not stand a chance against pythons. Woodrats are not the only threatened species in the Keys -- the cotton mouse, marsh rabbit, key deer, to name a few -- are in peril for a variety of reasons. Photo by Clay DeGayner volunteer for U.S. Fish and Wildlife Service via FAVOR.

In the hierarchy of nature, alligators and crocodiles reign supreme in the Glades and the north Keys as apex predators. But the Burmese python is another master at ambush, lying in wait in the water with only nostrils and eyes visible, waiting for a meal to walk by -- a bird, another reptile or maybe even a bobcat or deer. A constrictor, the python is smart too, aiming to tighten the lungs of its victim, waiting for the heartbeat to stop before swallowing it whole.

And swallow they can. "A deer was found in the stomach of a python in Everglades National Park about a month ago," said Rozar.

Even more troubling was the discovery of a seven-foot Burmese in Marathon. That's too close for comfort to Big Pine Key, which endangered key deer and other species call home in the National Key Deer Refuge.

"All snakes swim," Rozar explained. "They might not be happy in saltwater, but they can navigate from Florida City, where there is an established population, to Key Largo. And before U.S. 1 was fenced in, we found python road kill. Snakes are attracted to the heat of the asphalt."

"Part of the problem is that we don't always know where the snake came from," said Rozar. "Some may be from the Florida City population, but others may be escaped or released pets. The climate is favorable for them here and they can thrive out in the wild."

BE A RESPONSIBLE PET OWNER

"Port of Miami and Port Everglades are hubs for exotic animal imports, making it easier to buy these animals here," said Rozar. "The exotic pet trade has an incredibly powerful political lobby."

An illegal trade could bolster a black market, but the Florida Wildlife Commission doesn't want the average Joe to buy pythons anymore. On July 1, 2010, the Burmese python was listed as a conditional species and could no longer be purchased as a pet. Only properly licensed dealers, public exhibitors and researchers can possess a Burmese python.

Pet owners with pythons prior to that date were grandfathered in but must maintain a valid license. The commission doesn't turn a blind eye. Earlier this year, a West Palm Beach man was charged with illegal possession after his snake wound up in a parking lot near a multi-family home.

But still, other reptiles abound in pet stores and are available from breeders. The Argentine tegu, for example, is a non-native lizard and aggressive egg predator.

"It may be tempting to buy a reptile when it's small," cautioned Rozar. "But educate yourself. These animals require very specific care."

WHAT YOU CAN DO - RESOURCES

"Everyone is a Florida Wildlife Commissioner" -- wise words I recently heard at the Ladies, Let's Go Fishing seminar. Rozar agrees.

Visit the Florida Wildlife Commission for more tips on supporting the native flora and fauna of our state.

Support the work of FAVOR - Friends and Volunteers of Refuges and learn more about Key Largo Wood Rat conservation efforts.

Learn about invasive species and how to identify them. Not all snakes are aliens.

Report an exotic. If you're in the Keys, call 1-888-IVEGOTONE and a trained, rapid responder will be dispatched to your location. Report the finding even if it's not current -- all collected data helps researchers.

Have an unmanageable exotic? Don't release it into the wild. That's illegal. Give it up for adoption on Pet Amnesty Day organized by the Florida Fish and Wildlife Conservation Commission.