News and notes about the South Florida social media and blogging scene, with a little tech thrown in for good measure. And maybe some other random events, too 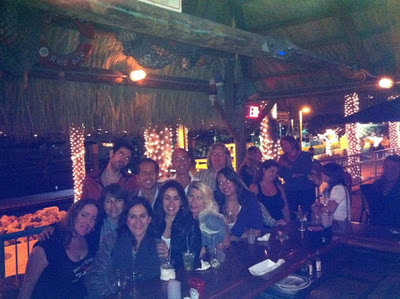 Silicone Bitch wishes the South Florida and tech scene a great, prosperous and productive 2012. Seen here, year's end old skool tweetup at Monty's in Miami Beach.
It was a pretty good year for the South Florida scene. Here are some random notes in no particular order, stream-of-consciousness style ... if we missed anything, feel free to leave a comment!

SheCon (@sheconexpo), a blogging conference and new media expo for women but not limited to women, got its start. Bloggers from all over the country gathered in Miami Beach.

Speaking of conferences, Women's Success Summit hosted two kick-ass events -- Michelle Villalobos (@mivi), Jessica Kizorek (@jessicakizorek) and others inspired people to do and be their best right here in our own backyard.

Startup Forum (@thestartupforum) breathed some fresh air into the community.

Social Media Club Palm Beach (@smcpbc) was pretty active too and the ladies at Association of Women in Communications in South Florida (@awcsf) weren't lagging behind, either.

Tedx Miami (@tedxmia) simply rocked. It doesn't get better than that.

Sketchy Miami (@sketchymiami) turned the simple idea of a portrait into a social phenomenon.

The 4th annual SxSe (@sxse) in Key West was the most fun you could have while tweeting and drinking.

Sea Tweetup (@seatweetup) sailed away on its virgin launch.

A startup bus from Florida went to SXSW. (It's too bad Miami Beach 411 and them didn't connect.)

Carlos Miller (@carlosmiller) got pissed off on Foursquare Day, which, by the way, was a huge success, in spite of the drink problem. (Silicone Bitch wishes that Mr. Miller would revive @socialmediaputo.)

Miami Beach 411 hosted several wonderful social gatherings with locals, Miami rookie residents and out-of-town visitors. No company in Miami has a better online and IRL community for locals and visitors, period. If you want to learn how to manage an online community, 411 is a great model.

We love brands that love us back! GM Southeast (@gmsoutheast) won a prize for doing just that.

Worstpizza.com founder Craig Agranoff (@lapp) started writing for Huffington Post and became a Palm Beach tech TV star. Oh, he also published a book about social media and election campaigns, Socially Elected. He's so hawt, we dare not even look at him!

Let's not forget Miami author girl Tedx Miami founder Gina Rudan (@ginarudan), who wants you to see the best in you via Practical Genius.

And because we all need sustenance, Christine Najac @sflfoodandwine published the Food Lover's Guide to Miami and Fort Lauderdale.

And speaking of foodies, if you're not following @wokstar, @4theloveoffood and @rjflamingo, you're missing out on some good social media nosh stuff.

Spearheaded by the very talented and dynamic @janiec, Miami Rat Pack emerged as a great group -- "drinkers with a social media problem," Silicone Bitch once remarked.

LATISM (Latinos in Social Media) got its own South Florida chapter, co-directed by @miamishines.

Some very cool hashtags sprang forth from the 305 with great success: #top10lies, #foodiechat and #biochat.

And speaking of groovy South Floridians who work in social media ...

James Echols and Annette Peikert of (@soulofmiami) continued to change the face of our community with their Life is Art events.


Who dares to say this isn't an innovative, vibrant community partaking of "social" for many interesting reasons? This list could go on forever! Silicone Bitch kindly requests that you leave a comment if we didn't mention you. What resonated with you this year in local social media and tech? What did you accomplish?

Awesome!! I'm so glad I got to meet you this year Maria! You are one great gal. Cheers to 2012 and more big things!

Love it ViceQueen!! You were able to bring together the special nature of our Miami social media community! Thank you so much! ;-)

I declare you @socialmediamiamimayor ! What a great recap! I'm going to show this to anyone that wants to get involved in Social Media.

Thanks for the #Biochat mention Maria! I'm glad you found it news worthy.

Flattered to be included in such awesome company! w00t! (Do people still say, "w00t!"?)

As always a great read Maria!

Sending a round of gin to all the Miami Social Media peeps, you are the best!!

What about your awesome social media and blogging workshops @ Preemo!

Great recap Maria. Look forward to reading more of your blog in the new year.

Thanks so much for including me in your Foodie list, so honored! Long live Vicequeenmaria.

So many amazing and talented people in our community! So honored to be a part of it and included here. Love this & looking forward to connecting with those I've yet to meet. Wishing you a very happy & prosperous 2012!

Great roundup Maria! I think that 2011 will be looked back as the year Social Media in Miami finally 'grew up' and the whole city has taken notice!
Grant

It's really nice to see a blog like this that there are people who are exchanging thoughts about Organic Social Media. There's a saying that more heads are better than one, hehe :)

Awesome to see familiar faces and names continuing to do great things in 2014 !! Our digital agency flies below the radar but we do a lot of business processes, augmented reality, and overall SEM to Landing Page strategy...