Silicone Bitch: Should You Throw a Party in the House of Facebook? 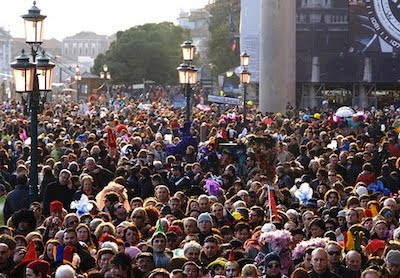 You want a crowd on your Facebook page, but how do you manage it when you can't possibly know how your page members treat each other? Photo via Mararie's Flickr.

I've been professionally involved in online communities for over a decade, either as a blogger, moderator, participant, event planner, and so on -- you name it, I've done it. One particular travel community I used to moderate was hugely successful. Currently, I have my hand as an admin in several Facebook pages. I also enjoy Facebook personally, as I am able to find like-minded folks there involved in a few hobbies I love and causes I espouse.
My observation of some bizarre, erratic member behavior in one of these communities has recently given me food for thought.
So social media managers, riddle me this ...
Let's say you host a party for your client in a house called Facebook. It's a really, really big house; there's room for everyone ... no worries, no problem. Pass the canapés and cocktails, we're good to go.
Thousands of people show up to talk about how awesome your client is and chat about stuff that's related to your client.
Everything is flowing smoothly. User-generated content just keeps pouring in. Great!
Occasionally, a few ornery and obnoxious people show up to your party and that's ok. You're the host. You throw them out and the rest of the guests carry on.
But one day, one of your guests decides that it's no longer your client's shindig, but their own. Oh really? Wasn't I managing my client's party? Well no, you weren't.
In the house of Facebook, you can throw a party, but you have no control over what kind of relationships your guests have with each other. Let's say John Doe takes exception to Jane Doe. Maybe John doesn't want to hear what Jane has to say. Maybe John doesn't want Jane to overhear his conversations with others. You can't throw John out for not liking Jane. He has a right to privacy. The house of Facebook is cool like that.
Here's the problem, however:
Jane never really did anything to John. In fact, John doesn't even really know Jane very much at all. And instead of simply ignoring Jane, John goes one step further, by throwing her into the closet -- blocking Jane from his timeline. So she finds herself wondering why she was in the living room enjoying a cocktail with other guests and is now suddenly locked up in a closet with a bunch of other folks, hearing only one-sided conversations. John might as well have put a muzzle on Jane and she wasn't even a troll.
You see, here's the thing. John talks all the time. He holds court in your party that you have thrown in the house of Facebook at your expense. Maybe John has a lot of cool things to say about your client, but your purpose in throwing this party was not to limit conversations, but to expand them. He keeps Jane and lord knows how many others in the dark in what is supposed to be an open, joyous, community-driven, crowd-sourced event.
John is basically sabotaging your party in the house of Facebook. It's disruptive. It censors information from folks who didn't do anything to offend John in the first place.
Yet there's nothing you can do, because John has every right to not like Jane. And so you sit and watch, as an insidious, underhanded cyber bully of sorts takes over your own soirée.
Lesson to be learned: Find a better banquet house for your next party -- a forum platform where you can not only block spammers and trolls, but also where you can supervise the flow of editorial for all guests to see.
Posted by Maria de los Angeles at 1:22 PM