On Jeremy Wade, River Monsters Season 4 and Digressions That Have Nothing To Do With Fishing 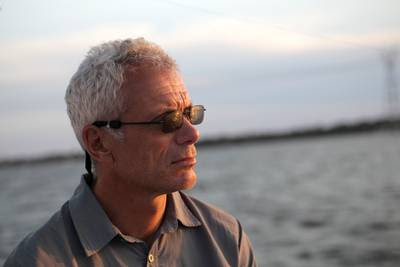 Ladies, do you know what our Hurricane Season Boyfriend has been doing since we last featured him in June 2011? Well, of course, fearlessly chasing river monsters around the world, but he did make a pit stop stateside to unravel the mystery of dangerous American creatures -- and he wasn't even following political candidates on the campaign trail!

Just in case you forgot, Hurricane Season Boyfriend is an annual series here at Sex and the Beach -- a pantheon of famous and sometimes infamous celebrities we'd want for chores around the house when another Category 5 hits the peninsula of Florida. Yes, because it's not a question of if it hits again, but when.

In 2011, Jeremy Wade blew the competition out of the water like a school of mullet freaking out over a pursuing tarpon.

Ladies, if you think your life is hard, just imagine being a 1-pound fish worrying constantly about being gulped down the cavernous mouth of a 100-pound fish that is basically nothing more than a Dyson vacuum with fins. Please donate your Xanax to the Mullet Anxiety Disorder Foundation. Sharing is caring.

Anyway, Jeremy Wade earned this exclusive, much coveted honor because anglers tend to be very handy in crisis situations -- especially foolhardy, obsessive ones -- which is basically synonymous with being a good angler. They know courage. They know determination. They know patience. They know tools. They catch dinner. And they tell good stories. You get my point.

So on April 1 -- yes, April Fool's Day -- all us fishing fools waiting with "baited" breath will be glued to our TVs for the season 4 premiere of River Monsters: American Killers.

Ladies, if you aren't familiar with rigs, here's a primer. A rig is the way you tie together the business end of a fishing rod, the point of contact between you and fish: bait, lures, hook, leaders, sinkers and so on -- all connected to the line.

You know how you prepare ahead of time what you're going to wear on a night out on the prowl? A rig is somewhat the same.

Fishing is a seduction strategy of sorts, albeit a more rustic kind. Not that yours is any classier, mind you.

And speaking of shark rigs, it seems our Jeremy Wade was in Florida checking some monsters in our own backyard, without even having paid a visit to our governor! 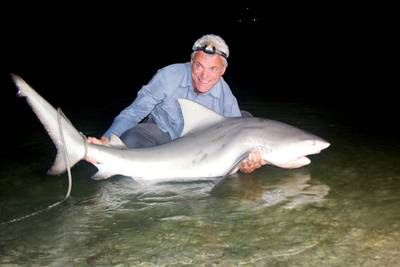 I can understand the bull shark -- in a previous season, Jeremy Wade recounted shark attack reports on Australia's Gold Coast in a lake ironically called Miami. In the River Monsters book, he describes Miami Lake as "a high density development where trimmed lawns go right down to the water."

Yeah, but the only difference is that here you wouldn't find some Housewife of Bal Harbour in an intracoastal channel using her Louis Vuitton bag as a flotation device.

It does make me wonder though: when I was a little girl, I would see sharks in the canals by the Coral Gables waterway. But they were most likely nurse sharks and not the notorious minotaurs of the seas. 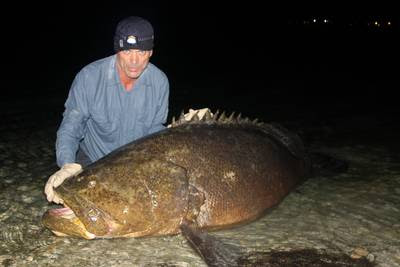 In any case, what the hell was a big-ass grouper doing up a river? I thought groupers spawned in the ocean and only juveniles lived in estuaries for protection. And I wonder if unusual migratory patterns are related to a grouper's ability to change sex according to the number of available mates.

Yes, I know some of you do this at South Beach clubs regularly, but it's not the same.

And truth be told, if Jeremy Wade wants to see some real Florida maritime predators, he should stop by South Beach on a Sunday afternoon in peak tourist season. They live on sand, not shore. Some of them have fake boobs, speak with Eastern European accents and carry roofies for their unsuspecting prey. Others wear gold chains and stuff big wads of cash in their speedos to lure two-legged blonde fowl. They prey on each other. It's amazing they've evolved so far without species annihilation.

Oh, what the hell do I know? That's why there's good folk like Jeremy Wade to explain these mysteries.

As for the bull sharks and groupers, we have more questions than answers at this point, so I reckon we'll have to tune in April 1st on Animal Planet for the two-hour season opener starting at 9 PM (ET/PT). The series will air regularly on Sundays at 10 PM.

Actually, I've seen a press teaser for the first episode, but you'll have to gut hook me for a spoiler ... and ladies, I'm not going to show you that technique. That's bad fishing.

You, however, can see this one:

Great piece! I have seen some of your posts on the RM fb page. Dano is a mutual friend. :) Great stuff!
Cheers!

Awesome writing. I JUST saw Jeremy Wade's show for the first time this weekend, and I'm in lust. I can't stop watching it. He's a beautiful man... and that accent just melts me. It's been so interesting watching the shows and I plan to keep watching. Thanks for posting this.

This is april jackson and i think jeremy Wade is Sexy as hell! Keep huntin. Love your show.