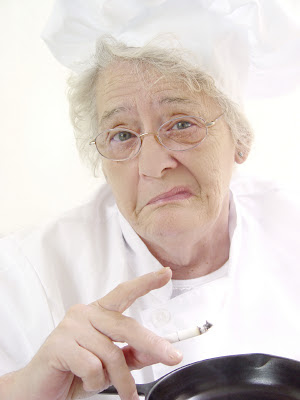 Remember the original nom de plume that started this blog? Well, she's back! All posts under the Manola Blablablanik series are semi-fictional.

Last night, my ex-boyfriend -- who can’t seem to let go of me and I’ll admit, I’m still holding on to a string or two -- came over for a late supper.

During the otherwise pleasant evening, he kept farting in a seemingly involuntary manner. He apologized with each burst of air from his anus and said he didn’t know why he was having digestive trouble. Certainly, it wasn’t my delicious beef and peppercorn stew, served with jasmine rice. He was farting before he even walked through the door. In fact, he probably deployed gaseous emissions to fuel his SUV on the way to my pad.

You’ve heard the old saying: “familiarity breeds contempt,” which means you’ve let go of boundaries and courtesies to the point of disrespecting someone you know very well, romantically or otherwise.

Now, let me coin the phrase “familiarity breeds gas,” which means you don’t care anymore about breaking wind within earshot of your beloved.

Well, he didn't do it on purpose like a drunk, sophomoric frat boy.  He's usually a polite, classy guy. And mustering up my deepest compassion, I reflected upon the fact that sometimes our bodies get the best of us, no matter what our best intentions. I had to set my ego aside and accept that the man in front of me was simply farting. I couldn't take it personally. I couldn't equate him with the stream of wind parting from his rectal orifice.

LOVE IN THE AGE OF NO CHOLERA

And this got me thinking. He’s over 50 and still a spring chicken by today’s baby boomer standards.

I’m 45. And like many woman my age, I take care of two elderly parents, who thank God are still stable enough to live in their own apartment. But there’s a reason we call them “old farts,” because old people just fart all the time. In fact, you could be having a conversation with an old fart and it's like a machine gun crescendo in between every two sentences, punctuated by coughs that are trying to mask farts, which is a very ineffective form of subterfuge a sotto voce.   Look, your farts will always be louder than your cough. That technique just doesn't work!

So if you must fart, at least do it honestly.

This geriatric flatulence is cute and causes numerous giggles, just like it’s so adorable to wipe a baby’s butt when it’s slathered with stinky green poo.

But babies are different. They wear ribbons on their heads and simply don’t know better. Sphincter control comes later in life.

“Lord have mercy, what do I have to look forward to?” I thought this morning. “Old guys who fart, burp and then on top of that, add the indignity of snoring in bed without being able to get it up other than that rare morning woody?”

When we’re younger, we dream of co-habitation in the prince and princess castle. No woman in her twenties falls in love and thinks: “Oh, I can’t wait to go buy cheap IKEA furniture with you, honey! And how I’ll savor the first time you fart and I queef under the plush down comforter!”

But by the time you hit 40 and are either divorced, widowed or a bonafide spinster, it’s a whole different story. Maybe it’s just better to be in a relationship that preserves two separate households. He can have his man cave and fart, burp, snore to his heart’s content. And she can keep her girly, candle-scented apartment intact – save for the occasional fart invasion when he tries to mark his territory.

Actually, the fart symphony didn’t bother me so much. I was more worried the fumes would kill my houseplants.

And truth be told though, the way to a woman’s heart is not through farts, but if that’s all that’s wrong with him, you might want to compromise and turn his prodigious talent into a helium balloon business.

TO COUGAR OR NOT TO COUGAR

When I lived on Miami Beach, my then neighbor Helen – a 92 year-old Jewish widow with much chutzpah to spare – once told me: “I don’t like to date old men. I changed enough diapers already raising my kids. I won’t even look at a guy unless he’s under 70.”

What a cougar she was.

So yeah, then there’s that. Maybe there’s a good reason to date younger men. I mean changing diapers isn’t a chapter in the Kama Sutra. And don’t let me get into weak bladders and pee smell. Not particularly sexy.

But see, it's all about unconditional love, when you can accept poo, farts, burps, snores and sneezes as part of intimacy. And when you get married at a young age “for better or worse,” you are signing up for that.

So wherever you are over 40, have faith that love is still very possible. And you might just accept and love someone with great passion, not warts, but farts and all.

Be prepared, however, to wear a Hazmat-grade gas mask well into your mid-life and old age. I wonder if they come in pretty pastel colors and with sparkly bling? Maybe spunky 70-something Betsey Johnson should rethink her designs!
Posted by Maria de los Angeles at 9:24 AM