Since the arrival of the vernal equinox, Manola's garden has witnessed masterful acts of seduction and a flurry of frenzied sexual activity! 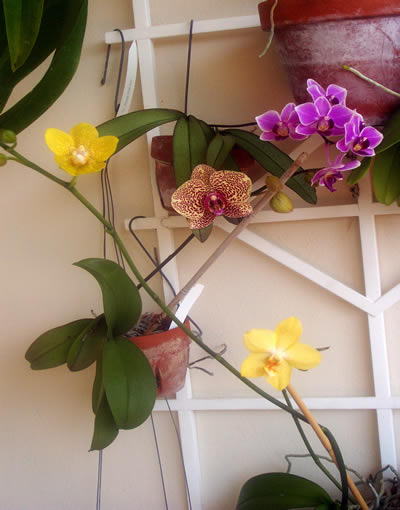 According to Taylor's Guide to Orchids, "Orchids have made thousands of bizarre adaptations in order to seduce specific pollinators."

For instance, the orchid that looks, feels and smells so much like a female bee, that the male simulates mating and flies away without ever suspecting he just humped a flower. But he's hot to trot and in a second frenzied mating, deposits the pollen onto "another attractive-looking 'musky'-smelling and yet totally bogus paramour." This process is known as "pseudocopulation."

In human terms this would be called "safe sex with a blow up doll."

Some orchids also use an intoxicant "causing the bee to fall drunkenly into an orchid tank of liquid, where it is rudely awakened into recovery. . . ."

Oh, come on! Admit it! You've never had a drunken one night stand that ends in a rude awakening?

Another type of orchid shoots its wad of "sticky pollen" onto the head of the pollinator.

A majority of orchids attract pollinators to "their beautifully patterned or flamboyant lips that act as irressistible landing platforms."

And you thought sex on the beach was only between humans!
Posted by Maria de los Angeles at 12:54 PM

Email ThisBlogThis!Share to TwitterShare to FacebookShare to Pinterest
Labels: garden

pawlr said...
Nature's power and complexity is unmatched by anything Mankind can conjure up.  I highly enjoyed your exposition on flora-fauna copulation.
9:19 AM


kaib (klotz as in blood) said...
Comes to gardens, I'm a blooming idiot. But in the words of a world-famous sexologist, "Screw the roses! Send me the thorns!" Sharp chick, no?
6:09 PM