Manola News, Miami Beach, July 2, 2006 -- SOUTH BEACH GROUPER GROPES ON LINCOLN ROAD! Marine biologist Finn McRoe, straight-laced adjunct instructor at the Hook N' Sinker School of Marine Science, is a man who eats what he teaches and is reported to have been sucking the juice from mussels at Le Bon this holiday weekend. After a few rounds of Delirium Tremens, his bladder begged relief and he stumbled accidentally into neighboring night club Score, only to be sucked dry to the boner himself by a protogynous hermaphrodite!

"It was truly a sight for sore hides," claims witness Mr. Jackoff N. Slyde, who just happened to be peeing in the next stall when the incident went otherwise unnoticed by other club patrons. "I've never seen anything like it in pubic [sick]."

Mrs. Jen I. Tall McRoe, the instructor's wife, who suspected something had gone terribly wrong after her husband had excused himself and not returned to the table, sobbed uncontrollably as she searched for him in the darkness, throwing her arms up in the air like she just don't care, swimming through a sea of throbbing, sweaty happy manhoods, which forced her to just shake, shake, shake her booty.

"It was horrible," wailed the wife as a smiling, scantily clad insta-friend handed her an appletini. "I was a fish out of water! This would never have happened at Laundry Bar!"

Paramedics rescued Mr. McRoe from the scene and sped to Mount Shania Twain Hospital to treat the instructor for minor pickies (penile hickies, according to Dr. Suck My Gupta). His wandering wanker safely wrapped in gauze, Mr. McRoe offered a possible theory for the attack in an exclusive interview:

"Unlike a land shark, who only rarely bites an unsuspecting bimbo on the ass, this fish commonly changes sex to meet the needs of its partner, using club bathrooms to remove its business attire and slip on a pair of fishnets. After applying a bucket of lip plumper, the animal saunters out for an evening of bait and switch. Its gills are so powerful, it can suck prey in from a distance, like a Hoover on overdrive." 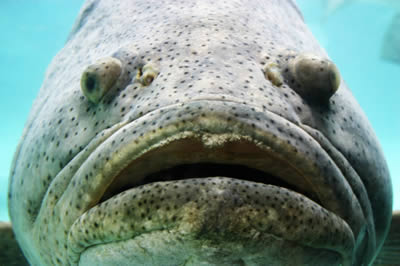 Manola wishes to thank a very special gentleman friend, with whom she shared a delectable grouper dinner, for the humorous conversation that inspired this edition of South Beach Freak Fauna.

What in the hell are you drinking?

Special Manola juice that endows me with super powers!

scan some of those preserves, would you.please? great stuff...