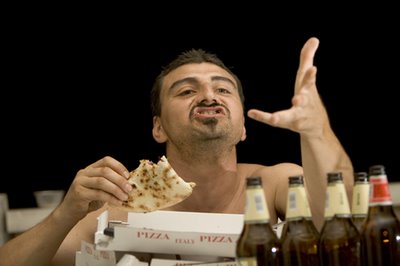 THE SCENT OF A MAN

My ex-boyfriend, Mr. Thinks He’s Huge, either smelled like ass, vodka or any combination thereof. I must admit, however, that as a member of this relationship I was suffering from Stockholm Syndrome and that on those days in which he redeemed himself and convinced my then puerile mind that he was worthy of my love, his scent was intoxicating.

I never bothered to look at the label on the bottle, but the scent evoked a cross between Drakkar and Kölnisch Wasser – an enticing, masculine mixture of armpit, men’s locker room, concentrated sweat from pro-football linebacker crotch, day-old semen on Monica Lewinksy’s dress, corked Merlot and stagnant swamp -- all blended beautifully with a hint of citrus.

As I recoil from the scent of a man I now consider to be a living, breathing ambulatory rectum, I am also drawn – by random association of the olfactory sense -- to a distant memory lodged somewhere between the archives of “prom” and “frat party” in my limbic brain: OREGANO MAN!

Oregano Man was the owner of a now-defunct pizza joint that thrived circa 1985 on some non-descript corner of Washington Avenue. Long before the days of Pizza Rustica – yes, back in the day when you could saunter about with teased hair in hot pink Candies and not be treated like a ho – I spent many an evening under the fluorescent lights of the pizza joint with friends, waiting for our friend, Temporary Cocaine Addict -- who was also the delivery girl -- to get off work.

Since we weren’t old enough to drink, we shied away from Club Deuce and scored free Diet Coke from the cashier. She was a lovely, plump Venezuelan gal who had once been a model and now suffered the ignominy of selling pizzas. Miss Venezuela proudly showed us the one portfolio photograph in which she proved that she was far too healthy-looking to model.

Had she looked like a Guantanamo Bay prisoner, Miss Venezuela might’ve had better luck at Irene Marie around the corner on Geezer Drive. Oh yes, Ocean Drive as we know it today did not come to be until all the old farts died and the greedy vultures swooped in, turning empty rooms into swanky hotel suites, NFA -- no farting allowed – of, course.

I believe Oregano Man kept Miss Venezuela as the cashier because she had a bosom that inspired envy from bovines, not to mention nipples that would pierce through metal even in hot, humid weather. And since she was so concerned about her encroaching weight, she adopted the Jiggle Wiggle Diet, which required her -- according to her keen understanding of thermodynamic law – to constantly get jiggy wid it while she was standing. Had she not been so lovely, customers might’ve mistaken her for an Alzheimer’s victim turned rap stripper.

But I digress. What about Oregano Man?

Eventually, the expression carved itself permanently into his mug, so that just by looking at him, you could see in his eyes that the first words to come out of his mouth, no matter what the circumstances -- even when baptisizing his the latest member of his brood -- would be prefaced with “Fuck! Bafanculo! Forgive me father for I have ..."

As many who work in the restaurant business know, it’s easier to clean up your act and your foul-mouthed speech rather than your own body. You come to smell like the food you cook, no matter how much you scrub your flesh. Oregano Man scrubbed, to be sure. Scrubbed, mixed, tossed, lived, breathed, and fucked pizza, so you could smell him a mile – if not a clavicle’s length – away.

And so we whiled the nights away at the pizza joint until Temporary Cocaine Addict hit rock bottom. No one talked about it; no one did anything about it; it was what it was. We couldn’t drink, but back in the 1980s it was easier for my friend to score blow than it was to buy pastel-colored linen jackets.

In high school, she had been the Overweight Popular Underdog, but she was still the quintessential Blonde American Pie, Goody Two Shoes, Most Likely To Succeed, Yearbook Headliner our Senior Year. After graduation when reality struck hard, she acted strangely for a while under the guise of the snort, until, thankfully, she got the labels – and the powder -- out of her life.

I stuck by her side through it all.

On one of those nights, Temporary Cocaine Addict, Some Joe, Oregano Man and I closed shop. After tossing back a few beers at the South Pointe jetty, the four of us walked back to my friend’s apartment and I ended up sitting next to Oregano Man on the couch while the other two enjoyed a noisy romp in the bedroom.

Oregano Man lay back on the couch with his legs spread, exhausted. I sat tightly on the edge as we looked askance at each other while the other pair of ships that had crossed in the night screeched like pigs at slaughter.

After an awkward exchange of words, I offered to grab us a round of beers, but instead he grabbed my hand and lunged toward me. Next thing I know, he’s stuffing my face into his hairy chest and all I can smell is tomato sauce, paprika, salami and that God damn oregano!

“Oh baby,” he said as he climbed on top of me like mozzarella melting on rising dough!

“Get the fuck off me!” I yelled as I pushed him off.

I grabbed his left hand and pointed to the ring.

"Manola, my ass! Go fuck your wife, asshole. And take a fucking shower, for Pete’s sake!”

THE STATE OF OREGANO TODAY

In the days, months, years to come, I developed a benign repugnance to the scent of oregano. I say benign because I have nothing against the noble herb. To this day, whenever I cook any of my favorite dishes that require oregano -- mostly Greek -- I buy it fresh, pinch a few leaves here and there, toss the rest and have myself a good laugh.

Here from 25Peeps and say congrats from Norway:-)

This blog is HOT HOT HOT.

You were wearing the heels, weren't ya?

Hi Renny! Welcome to the land of sunshine!

That story gave me a good laugh but I'm sorry you had to go through that. The thought of a hairy, smelly chest makes me want to gag ;)