Planet Manola: Dumb Under the Influence 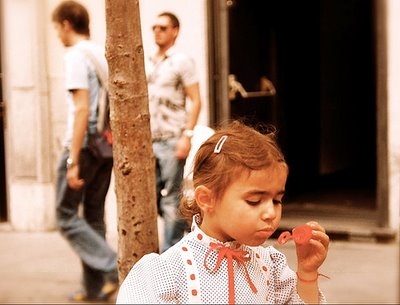 Ah, the innocence of youth, when bubbles are the only thing you consider blowing!

In this week's edition we explore the vicissitudes of crime and punishment.

Could this be love? Nay, could this be a shining example of the teachings of Jesus Christ, Krishna and Buddha? You tell me!

Last week, a Pinecrest cop gave me a moving violation ticket because I cut through a gas station. Folks, my driving record is so clean, Mother Teresa could eat off of it!

So why did I cut through the gas station? Because I was on my way to the only avian veterinarian in town for an emergency appointment. My mini-macaw, Samba Jalapeño, was lying half-conscious in her pet carrier and three trucks were waiting to turn right on US1. What would you do?

Well, if you're a Pinecrest cop, you give someone with a legitimate excuse and a perfect driving record a $150 ticket, that's what! And you also jeopardize the health of her injured pet!

Sambita is back to her normal mischievous self. When I point a finger at her, she says "Look what you've done!" Which is exactly, my friends, what I'm going to tell Pinecrest cop when I see him in court.

A SNORTING MODEL GATHERS ALL KINDS OF MOSS 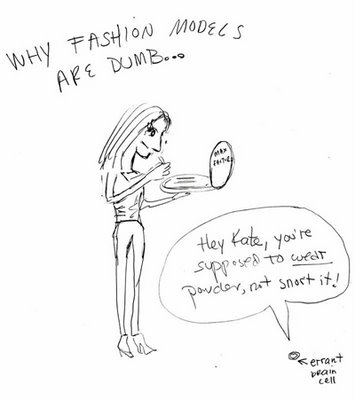 Speaking of compassion, it's the MO for the British fashion industry, which rewards -- instead of punishing -- models who are at the center of public cocaine scandals. Surely, Pinecrest cop would've meted out severe punishment to Kate Moss, in lieu of awarding her Model of the Year for her professional achievements.

Stephanie of Back in Skinny Jeans reports:

"They are rewarding this woman for getting more famous because of getting caught on film blowing coke up her nose, and let’s not forget that this wasn’t the first time Kate ever used the drug. What kind of role model is that? Let’s also not forget that she is now engaged to a raging drug addict who cannot stay in rehab long enough to stay clean. So we glorify coke heads if they are pretty and rich."

This sort of leniency may be appealing to Mel Gibson, an accomplished, Oscar-winning actor and filmmaker who should also be rewarded for his professional achievements. Perhaps Mad Max should move across the pond and start drinking in pubs, so that his drunken rants against Jews don't get all blown out of proportion.

LOOPHOLES IN THE PENAL CODE

Pretty and rich, indeed! When Paris Hilton gets a DUI in Hollywood, she suffers nothing more than a slap on her bony wrist. Why? Because she drives drunk but keeps her mouth shut. Take heed, Mel: if you don't want to get crucified, be an anti-Semitic jackass in private!

Paris Hilton, whose greatest accomplishment so far has been posing on the red carpet, isn't intelligent enough to emulate Mel Gibson's career, let alone string together a series of letters together to spell PRADA. In any case, how can vitriol slide past the gallons of lipgloss smeared on her pout?

Nothing says "get off the hook" like pretty. Maybe Mel should grease up his chops too.

As for me, the life of a beloved pet is far more important than mascara smeared from crying.

drop me an email and I'll tell you how you can avoid points and driving school, etc.

hope the parrot is doing better

I hear from a lawyer friend of mine that it's a good idea to fight those tickets! I took his advice and fought parking tickets, and got some of them cut in half and others completely withdrawn! Somehow it seems the system is just there to suck in all the spineless ones; they don't want to deal with people with actual legitimate reasons, so they'll back down for the sake of time and money.

By the way, thanks so much for stopping by my site. :) You asked some pretty good questions about the scholarship. As it stands with most financial aid, once that check is cut, the student gets to do whatever he or she pleases with it. The school enrollment and transcript verification process is pretty much what serves to help assure a reasonable expectation that the funds would be used toward education related expenses (room or board).

As for asking corporations, that's one of the ideas I had burning in the back of my mind. Once the site gets traction, I think it'll help more corporations join the bandwagon. The thinking down the road is to have a corporation be the sponsor of the month for the scholarship.

I just hope to be able to get the word out more. Thanks for taking the time to write.

Just show the judge your avatar and offer to bang his gavel. He'll get you off...if you know what I mean.

I have two words to add to your post to really add the finishing touch: Debbie LaFave

Yes Pinecrest cops are the worst! I think they must be gathering money for all the street banners pinecrest puts up.

I just now realized that perhaps the English let Kate Moss get away with what she does because it keeps Britain itself in the limelight... as long as she's out of jail and running around, I certainly hear about the UK more often.

Sorry to hear about your bird, and your ticket.

Another victim of the People's Republic of Pinecrest.