Local: Beauty on the Beach 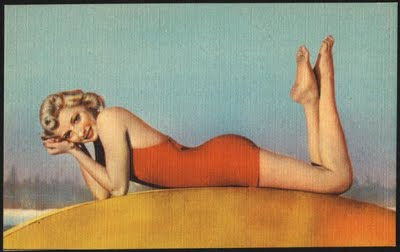 Postcard, c. 1940
You still have a few days left to catch the Wolfsonian Museum's Beauty on the Beach: A Centennial Celebration of Swimwear exhibit.

Located on the top floor, the exhibit adds to the museum's already rich collection of twentieth-century artifacts. The room is filled with actual swimsuits from the 1920s to the present, all from the archives of famous apparel manufacturer Jantzen. By far the most interesting is the oldest one -- a bathing costume knitted from heavy wool. It's a wonder women didn't drown in those darn things! 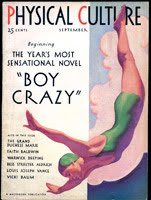 Swimming, as opposed to bathing, became popular just before the First World War. Posters, magazine covers, postcards, advertisements -- all which were designed to entice women to the water -- are on display. A short reel of vintage film clips complements the printed material.

The bathing suits, all lined up in a row in chronological progression, show how the shapes of women's silhouettes have changed in the last century. In the early years, freed from the constraints of Victorian dress, women were suddenly able to flex their muscles and expose their bodies in new ways. Fast forward to postwar 1950s and women became bombshells with hourglass bodies. And just ten years later, with the invention of Lycra, 1960s women sported a more natural, less exaggerated look.

As you browse the exhibit, think about what was going on in each decade of the last century. It's clear that the history of bathing suit design in America also reflected the history of women.

The exhibit made me think about how women dress in South Beach today. On the streets of the island, there's a very fine line between swimsuit and club dress. There's also a very big line between nudity and good taste.

But that's what we see outside. The Wolfsonian exhibit focuses more on design: how it was influenced by changes in attitudes as well as advances in manufacturing techniques and materials. 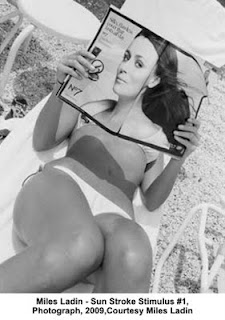 On the ground floor, the exhibit also features large framed black-and-white photographs by New York-based photographer Miles Ladin. Sun Stroke Stimulus asks the question "what does beauty on the beach look like here and now--on Miami Beach in 2009?"

The photos are humorous and playful, capturing just a few of so many South Beach bodies.

The brochure reads: "His intention is to reveal the unadulterated beauty and intensity of nature -- whether the beach or body-- as well as man's foibles and vulnerabilities."

Unadulterated? I find this quite ironic, considering that the aim of all things South Beach is to be nip, tucked and artificially enhanced -- even the buildings!

The exhibit runs until October 11th. Visit the Wolfsonian for hours and directions. Plan on browsing the museum's permanent collection as well. It's always worth a look.