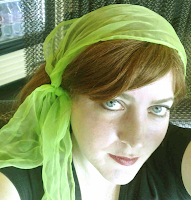 Wow, it's hard to believe that four years have gone by. So much so, that I totally forgot to celebrate this blog's anniversary. If I were married to me, I'd expect roses, champagne and an honest apology!

It's amazing that I didn't even know what a blog was just weeks before my first post.

It all started on October 10, 2005, when the newly created Manola Blablablanik pondered about things that no longer even cross her mind, unless, of course, she's giving advice to some wayward newbie just entering the mauling claws of life on South Beach.

Seven months after breaking up with her boyfriend, with whom she had faithfully spent most of her mid-twenties, my dear friend Boobette had already sowed her wild oats. I lived vicariously through my younger alter-ego, also a writer. Ten years her senior and a veteran of South Beach, I listened attentively to mini-me. "I'm such a ho," she told me one day with a pang of bewilderment. "I slept with more men in the past seven months than I have in my entire life!" And that's when it all started, because I immediately blurted out, "well, that's because you live in HoBe!"

-- Wax and Pap
Manola has certainly come a long way, hasn't she? She has deleted her blog accidentally and recovered her blog fortuitously (thanks to the help of a friend in Google); she has gone on hiatus a couple of times; she has survived the Jurrasic period of blogs after witnessing many of them go sadly into extinction; she has transformed from a secretive hide-behind-your-pen-name persona to a leading participant in a massive, national social media campaign; she has moved from the beach to the mainland; she has broken her leg; she has brazenly remained a spinster; and most impressive of all, she has suffered from agoraphobia and panic disorder but recovered fully with incredible, fearless resilience.

Darwin was wrong. He meant: "Survival of the craziest."
As I look back on the last four years and how I've grown -- I must say I'm pretty happy. Every single writing gig or social media project I've been involved with has come through this blog.

When people ask me about blogging, I always say it's a process of evolution. I don't need to know where I'll be tomorrow, because as long as I can write, things will move in whatever direction they need to. That's the beauty of blogging.

I want to thank all my readers, supporters, friends and writing clients for following this blog and having faith in me. The last four years were good. May the years to come be even better! And if I ever made you snort coffee out of your nose, well here ... here's a Kleenex.

Here's classic Sex and the Beach. My all time favorite cartoon:

Email ThisBlogThis!Share to TwitterShare to FacebookShare to Pinterest
Labels: anniversary

Happy anniversary, Maria. I'm happy to say that I've be around, in one form or another, for a lot of the ride. Many more!

Happy Anniversary! Everyone is crazy--we all just need to find the people who's crazy fits with ours.

Wow, you have the most stunning eyes.

Oh, um, and congratulations on the four years.

I like the lighting and color contrast in that picture.

So much Blogging, so little time...