This guest post is written by Craig Agranoff of Worstpizza.com. Yes, the power of the pussy can be used for fame, but what does it matter if you have a million followers? How can you possibly be a real person who engages? You're not a person -- you're a brand that exploits sex appeal. Craig is right about "sex sells," but I wouldn't discourage anyone, hot or not, from using Twitter the down-to-earth human way. Let's debate in comments. 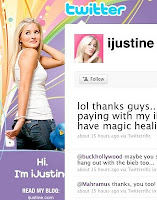 No, this isn't one of those lame "how to" articles you see by these self-proclaimed Twitter Pimps who will supposedly show you how to get laid in 140 or less. We all know that's a load of crap.

Nope, what I'm talking about are these lame monkeys who re-tweet every tweet posted by anyone with a profile pic that looks even remotely hot. Somehow, these dweebs think that by showing RT love to these hotties, they're somehow going to get some. It's an odd male urge, I guess, to be noticed by chicks we'd never have the remotest chance with and to dream about women who'll never even know we exist.

Welcome to the mind of man.

Anyway, what this makes me think about is marketing. No, it's not that big of a leap, since most of marketing is sex. We all want to own sexy cars, wear sexy clothes, have sexy bods, get it on with sexy people, and do things that will otherwise enhance our sexual powers. There's a reason Viagra is the best-selling drug of all time.

What is plainly obvious is that sex doesn't just sell, but it gives you a huge leg up if you're self-marketing. Go to YouTube, flip to any television news station, or look at who's got the most followers on Twitter, friends on Facebook, etc. It's all hot people. Hot girls, especially, dominate video realms (YouTube, TV) while both hot men and women are all over the rest.

So if you're trying to self-market and you aren't hot, find a new line of work -- you're shit out of luck.
Posted by Maria de los Angeles at 12:10 PM

What the?! I come over here for a little cubanita mamita and I get some gringo? Yus kidding meng. Great post.