The Glades: Sunny With a Chance of Hunkiness 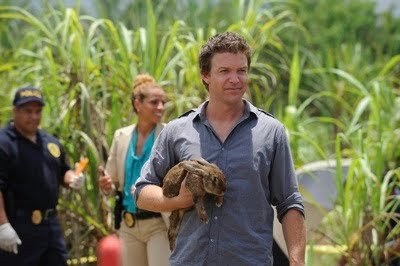 Matt Passmore as Jim Longworth on the set of The Glades, tenderly holding a marsh rabbit. You know what rabbit (conejo) means in Spanish, right? Think the "p" word.
It's about time someone replaced Horatio Cane in the pantheon of South Florida TV crime fighters. Don't get us wrong, we love Horatio. Heck, we already know that every savvy woman carries a Horatio Cane amulet in her purse for protection.

But just like mosquitoes, we need fresh blood and The Glades might be the answer. Step in Jim Longworth (played by hunky Australian Matt Passmore), a disgruntled ex-Chicagoan who moves to a sleepy town in the Sunshine State for a good game of golf in between solving murders.

Like many folks new to South Florida, Longworth soon realizes that not everything is at it seems here in paradise, and if you've truly experienced the real Everglades, you know that's true: the water seems shallow, but step in it and the mud will suck you in.

According to the press release, Longworth is a "an attractive, brilliant, yet hard to get along with homicide detective," and we hope he will not disappoint. We are excited about Longworth not only because his name is ridiculously phallic, but because if he proves to be tough in the swamp, great in the sack and an asshole only when he needs to fend off gators and criminals, we know he'll make an excellent Hurricane Season Boyfriend. 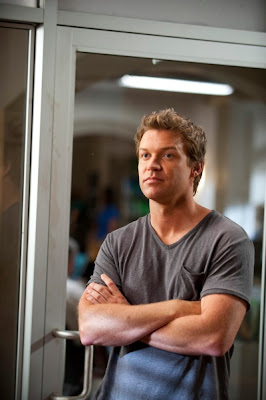 Those biceps would make an excellent addition to any Hurricane Preparedness Kit.
What excites us even more is the fact that unlike Miami CSI, this show was actually filmed in Florida, according to sources. But we shall see; ehem, we can spot a fake Florida outdoor set 3,000 miles away.

Sex and the Beach will hang out with some cast and crew this weekend during a private premiere party at the fabulous Hyatt Pier 66 in Fort Lauderdale. The intracoastal resort property was a location for several scenes in the first four episodes of The Glades. Stay tuned for a report!

"Sunny with a chance of homicide," The Glades premieres Sunday, July 11 at 10PM ET/PT on A&E.

Email ThisBlogThis!Share to TwitterShare to FacebookShare to Pinterest
Labels: hurricane, the glades, tv