Babes with Brains: Miami Mama Julia Tuttle Finally Gets Her Due

Babes with Brains takes a look at South Florida's entrepreneurial women. This is the first of a series. 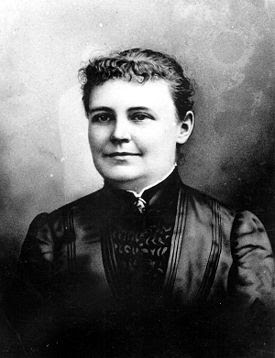 Move over South Beach bimbos! The Kardashian sisters weren't the first to start business here. Hey, you gotta look back ... WAY back to the late 19th century when tough cookie Julia Tuttle pulled a Lebron James, packed her shit from Cleveland but instead of playing hoops, she built a homestead sans husband all on her own on the banks of the Miami river. Can you imagine dealing with mosquitoes and humidity in those heavy, frumpy frocks? This woman really had balls!

Julia Tuttle had plans for all the property she owned, as in big development plans, though it would be almost a century before high-rises would sprout out of the downtown limestone. Besides, she probably wanted more neighbors than the Brickells, who were trading with Seminoles on the south banks of the river.

With a gift of orange blossoms, she convinced railroad magnate Henry Flagler to bring the tracks down to what was then called Fort Dallas and soon enough, a city was born. Julia Tuttle is the only babe to have ever founded a major US city. Come on Miamians! And you thought Lebron James was the best Ohio export? Here's something you can really be proud of.

Thanks to hard work by some folks as dogged and determined as Tuttle herself, this pioneer in a pinafore finally gets more than a namesake causeway to Miami Beach. On Thursday, July 28 at 9:30 a statue in her honor will be unveiled at Bayfront Park.

The statue is a 10-foot bronze, and the skirt depicts in astonishing detail the scenes typical of Miami around the time of its incorporation. In her right hand, Julia is holding the famous orange blossoms that she sent to Henry Flagler to convince him to extend his railroad to Miami.

An Oversight Committee of experts and members of the two women’s commissions [The Miami-Dade County Commission for Women and the City of Miami Commission on the Status of Women] supervised the entire process and raised over $200,000 for the statue. Arva Moore Parks, noted Miami historian and member of the Oversight Committee, provided the historical research for the accuracy of the scenes depicted on the skirt. The statue was created by Daub & Firmin Studios, a noted sculpture firm with extensive experience in monumental sculpture and the creation of art for public spaces.

The statue has been a long time coming. Fundraising started in 1996, the year of the Miami Centennial. It's fitting that July 28 is also the 114th anniversary of the City of Miami's incorporation. Julia will finally get to look over the city she helped build -- if she can see through all the condos.

Very interesting. The statue is really been a long time coming. It took 14 years to raise the fund for the statue of the sole babe to have ever founded a major U.S. city? They could have done better...in all it's a befitting tribute to Ms. Julia Tuttle. If LeBron made his move earlier maybe he would be more than willing to cough up a few thousand bucks to have the statue erected.

Maybe Lebron could save the Gusman!

That's an excellent idea, Maria. He could pay the Gusman's operating budget for a year with the change in his sofa.

Nice story, by the way. Thanks for covering it!

I like your tag "babe with brains". I would love to be a part of the unveiling and history of this city that I have called home most of my life. Pretty amazing fact that during THAT time, a woman had the courage to follow a vision, let alone in those conditions. I wish I would have known her.

What Julia lacked in babeness, she more than made up for in bronzy brainy brawn.

Flagler forbid we get a Labron by britto.