A Taste of Cuba in South Beach 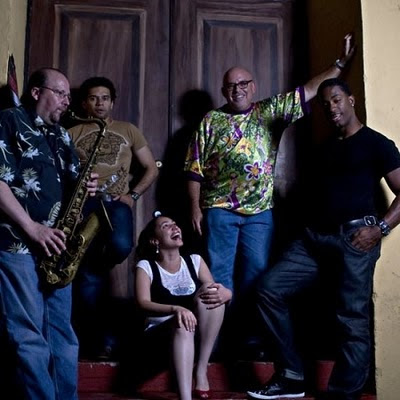 PALO! Afro-Cuban Funk band. Photo by Ray Medina.
Travelers often ask me if it's worth visiting Little Havana and my answer is always yes, yes and yes! There's so much more to South Florida than Miami Beach and for a real taste of Cuban culture in Miami, you've got to cross Biscayne Bay to the mainland.

But if you're like many South Beach visitors who don't rent cars, the idea of taking a municipal bus in Miami-Dade County is hardly appealing. (Heck, I wouldn't do it and I live here.)

Luckily for the curious, a taste of Cuban culture is now available right at everyone's doorstep in South Beach -- a taste so good, even locals from the mainland make the trek over the causeway for it.

Behind his shy demeanor, musical powerhouse Steve Roitstein -- a Jewish white guy originally from Connecticut who makes fun of his own unlikely attraction to Latin culture -- has always been deeply inspired by Cuban music, food and culture. So inspired was he, in fact, that seven years ago he started his own Afro-Cuban funk band and since then PALO! has never missed a beat.

Combine Steve's music with the culinary artistry of Chef Douglas Rodriguez and you've got one of the best damn things you can enjoy in South Beach without having to stand in line behind a velvet rope: great food, drinks and music all centered around Cuban culture.

For several months now, PALO! has been playing in the charming side courtyard at The Hotel Astor on Washington Avenue, also home to D. Rodriguez Cuba, an upscale Cuban restaurant offering contemporary twists on traditional dishes. The courtyard is small, but surrounded by jasmine vines and bamboo trees -- a lovely green oasis off busy, gritty Washington Avenue. The setting is decidedly intimate and a great spot for a date.

PALO! plays on a terrace facing comfy lounge chairs and tables where, once seated, you can feel the sensual tones of Leslie Cartaya's voice swirl up in the air while rhythmic drumming on bongos and snare beat close to your heart. Combine that with Roitsein's jazzy keyboard inflections and a sax's players funky riffs, and you've got a top quality South Beach live music gig in a most unexpected location. Live music isn't staple entertainment in South Beach; thank the orishas for this!

If I had to describe Cartaya's voice, it would be like sweet molasses with a dash of spice, flying through high and low notes like her beaming smile. And I can sit at the bar, literally an hour or more, staring mesmerized at the fierce percussion moves by Phil Armanteros on bongos and Raymer Oladle on drums, which would surely resound deep into the night through mountains and valleys, if we only had them.

Through all this, you will also find me tapping my feet to the clave, a specific rhythm that underlies all Cuban music, which is easy to hear but difficult to master. I may not always "get" the clave, but I do mouth the lyrics, which are in Spanish and quite catchy, describing typical Cuban daily life experiences. Roitstein always explains the lyrics to the audience, so English speakers don't miss out on the themes.

A typical night at a PALO! performance here involves drinks, dining and spontaneous bursts of dancing by newcomers and regulars alike.

D. Rodriguez isn't your typical Cuban mama's home cooking but it takes an interesting departure from the traditional. For starters, try the homemade plantain chips with sofrito dip made with roasted peppers and rich in cumin, garlic flavor. 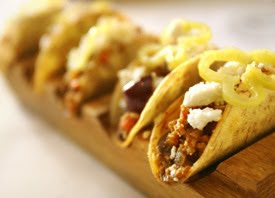 Don't miss the malanga beef and black bean tacos; the soft shells are made from a tuber root common in traditional Cuban fare. The flatbreads also use a tuber root, yuca, for a crust; the duck and foie gras version is delicious with smoked dates and radishes added to the toppings.

For the main course, try the Crispy Skin Cuban Pork with pickled sweet peppers that lighten up the rich meat. Seafood lovers should go for the Mahi Mahi Fricasee in a rich tomato Creole-style sauce. If you're new to Cuban food, take your pick of classic plantain side dishes like fried sweet plantains, tostones con ajo (double-fried plantains with garlic, not sweet like the former), and fufú de platanos (mashed plantain with bacon).

If there's room for dessert, the vanilla flan with pineapple is a tropical must.

Dining is also available indoors but PALO! show guests can sit outside and just order appetizers or drinks if they want to pass on main courses. The Dark and Stormy Mojito (Myer's Black Rum muddled with mint and topped with Ginger Beer) or the French Mojito (Hendrick's Gin, lemon and tarragon on the rocks with a splash of champagne) are both refreshing.

PALO! at D. Rodriguez Cuba may not exactly duplicate the street life of Little Havana, but it's the closest thing you'll get to an authentic Cuban cultural experience in hyped-out, over-saturated South Beach. Completely original, it's not a kitschy tourist trap. Trust me, there aint nothin' else like this in South Beach right now.

For performance schedules, check the PALO! website or blog.

This Saturday, July 3rd 2010, PALO! celebrates its seventh anniversary with a performance at D. Rodriguez Cuba. A $7 cover includes a free CD, which you will not want to leave Miami without after hearing this band. The bar will pour $7 mojitos. Keep in mind, PALO! shows rarely include a cover but this is a special event.