Trail of the Pirates: Everything That's Old Is New 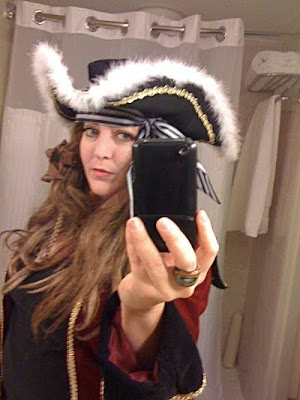 Pirates didn't have iPhones or GPS ... how did they manage to spin such a notorious reputation and get around back in the day?
I finally made it to St. Augustine -- five days and approximately six hundred miles later! Yesterday, no sooner did I arrive than I had an exclusive interview with Pat Croce, founder of the St. Augustine Pirate and Treasure Museum. The venue had a soft opening this weekend, and is still a bit under construction, but will have a grand opening to the public in December. I can't wait for you to see the video! (Upload speeds are terribly slow here, but you can see all my uploaded stuff so far on YouTube.)

Afterward, I headed over to the Pirate Gathering, where I had the opportunity to interview a lovely lass who's involved in the Ancient City Privateers. Last night's agenda ended up in a hilarious and incredibly fun pub crawl around the nation's oldest city, which I would now consider a mecca for all things pirate. And I gotta say, service and people are so friendly and smart in St. Augustine. Even the tourists are a several notches above the scum on a South Beach bathtub. Sorry, folks, but really I feel quite at home in this town, even though I'm a Miami native.

I won't be updating daily again until I start my "official" posts on this amazing adventure. There is so much information to gather and share, I may have to catch up with you after I return to Miami next Tuesday.

In addition to all the pirate shenanigans, I do have some business here. I'll be guest lecturing at Flagler College on blogging and writing in Tracy Eaton's class. Eaton is a journalist whom I met by chance because he's writing a book about Harley Davidson in Cuba. (My great uncle, Luis Bretos, was a champion racer and owned the exclusive Harley franchise in Havana. Eaton came down to Miami earlier this year and interviewed my father, who is one of a few remaining old timers who can speak of Cuba's glorious pre-revolution Harley Davidson culture.) Small world, eh? Really ... that six degrees of separation thing is no joke.

As well, I'm planning a social media workshop for businesses in the hospitality and tourism industry. Whew ... and as if that wasn't enough, I'll be on the Social Media Club South Florida panel Tuesday night, which focuses on Tourism, Hospitality and Social Media. I suspect I might be a bit frazzled after the long haul from St. Augustine to Miami, but it's all good!

Life is rich ... who knew that I'd be driving so far after recovering from agoraphobia. Not long ago, I couldn't even get into a car. I dare say that the freedom of the road and the opportunity to follow my calling and passion might be (gasp!) better than sex. It's not without sacrifice, but it's all so worth it.

Seriously, I had an epiphany while staring out at the water in Jensen Beach. As with every journey, I have reaped some enlightenment along this path.

My life has come full circle. Years ago, I left academia after I took my doctoral exams. I was supposed to write a book about the literary and historical interpretations of the Caribbean and Florida, and instead I discovered travel writing, which changed my life. I didn't want to keep my knowledge enclosed within the ivory tower of academe. Why write a Ph.D. dissertation that would collect dust on a bookshelf when I could share everything I knew with the world? I ended up with the dreaded title "ABD: All But Dissertion" ... but what does it matter?

Real education was my goal but I didn't want to do it in the traditional stuffy classroom. And I always had the dream of publishing my own travel magazine. Blogging has made all the difference for me -- a dream come true. Now I find myself doing EXACTLY what I had set out to do, without even realizing it as I was doing it. I feel so blessed and am so grateful. So heed me folks -- follow your heart, even if it means living outside the white picket fence of those voices that hold you back. It's worth it!

Fair winds to all! And don't forget, in the meantime, you can follow the Trail of Pirates on Twitter.

Hands down, this travel writing series would not have been possible without the devotion and support of the friendly and generous folks at the Visitors and Convention Bureau of Florida's Historic Coast, which covers St. Augustine, Ponte Vedra and the beaches in the area. A little love goes out to Hidden Florida, too. Additional thanks go to Annie's Costumes, Visit Florida and the Hilton St. Augustine Historic Bayfront, which is the smallest Hilton property in the world -- utterly elegant and charming, serving amazing Spanish-inspired food at Avilés Restaurant. The vicequeen approves!
Posted by Maria de los Angeles at 12:07 PM