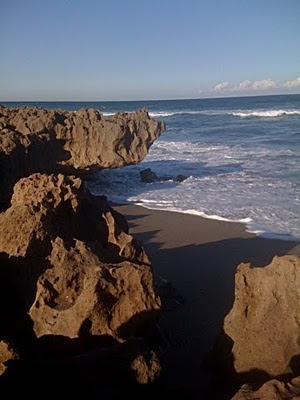 A section of beach at Hutchinson Island, Martin County. The rock is called Anastasia formation and comes from ancient sea beds. It was once quarried off Anastasia Island to build the Castillo de San Marcos in St. Augustine, hence the name, aka coquina. Sound familiar?
So today I arrived in Martin County, where I had the pleasure of interviewing Jim, the keeper at The House of Refuge. More on that later ... but in the meantime, did you know the average Joe is still looking for treasure and finding it here? You don't have to be a Mel Fisher, let alone a pirate, to grab yourself some booty.

In the Vero Beach and Fort Pierce area, about an hour north of Martin County, a woman and her daughter recently found a perfectly preserved gold bird from the 1715 Spanish fleet that never made it back to the mother country. The intrepid ladies, who are subcontractors for a salvaging firm, discovered the treasure while diving at a wreck. The bird is no fowl -- it's appraised at $885,000. And the ladies aren't spring chickens either: daughter is 49 and mother is 87. You gotta admire their pluck! More on this story at TCPalm.

Tomorrow's itinerary features the Sebastian Inlet area. I'll be visiting the McLarty Treasure Museum and other spots. And to get there, I'll be taking A1A northbound on Hutchinson Island instead of I-95, which is something I've been wanting to do for donkey's ages.

The beaches up here are absolutely gorgeous -- so natural and relatively untouched by the ravages of overdevelopment. I felt so at peace and very grounded today while hanging out on Hutchinson Island. Really, the more I travel outside of Miami, the less I like South Beach for its waterfront. Sorry, 305!

I'm a little frustrated with the technology aspect of this adventure -- wishing I had a more powerful laptop. Hopefully by the time I "settle down" in St. Augustine, I'll be able to share a proper story about each destination with you. Good things come to those who wait ... thanks for your patience!