Diary of a Sex Addict at Empire Stage 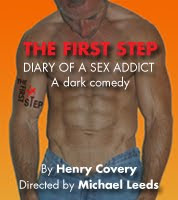 It's here I recently saw The First Step: Diary of a Sex Addict, a dark comedy about a gay man's struggle with sex addiction, directed by Michael Leeds, a New York transplant who has been directing plays in South Florida for six years. The play explores an obsession with sex that affects every personal and professional aspect of the lead character's life. Joe, as he's called, is a gay man, but there's something here for everyone, regardless of orientation.

At times, the play is funny -- a hilarious musical rap scene makes fun of online screen names -- but the play also engages the darker side of sex and relationships in ways that may make you question your own proclivities.

Earlier today, I interviewed Henry Covery, the play's writer. Diary of a Sex Addict is Covery's first play, the product of writing down his sexual history under the guidance of a sponsor.

SATB: Most people associate addiction with alcohol, drugs or food. What can you tell us about sex addiction?

SATB: Certainly, Joe is obsessed with sex. He's thinking about it all the time and sees everyone, even a paraplegic, as a sexual being. Sex is a natural act and it's part of life, but Joe is sexually abused by his father. Those scenes in the play are rather disturbing to watch on an emotional level. Is that a typical history for sex addicts?

Covery: More than half the people I've met at meetings do have some sort of abuse in their background. It could be verbal, physical or emotional and not just sexual. But one thing I've found is that many addicts have in common is a sense of grandiosity coupled with extreme insecurity.

SATB: Tell me about the organizations and meetings.

Covery: The SCA is Sexual Compulsives Anonymous and the SLAA is Sex and Love Addicts Anonymous.

Covery: Yes. The difference here is someone going on a date and thinking "I hope he calls," versus "my life and happiness completely depends on whether or not he calls." I'm not in AA, but everyone in the sex addicts program who has participated in AA has told me that it's much harder to get sober when you're a love or sex addict. I wouldn't have thought that. In this case, you can't get sober simply by quitting alcohol or drugs.

SATB: While your lead character is gay, you do highlight sexual obsession from gay and straight orientations in a funny scene mocking a dating game. Does sexual addiction affect different lifestyles?

SATB: Have you helped others by writing this play?

Covery: I wanted something creative to come out of my writing down my first step. In 12 Step, you are only as sick as your secrets and when you write it down, it's easier to examine your history. I've had people approach me after seeing the play to tell me that they're going to join SLAA.

A lot better to be addicted to sex rather than drugs,no ?

Hi anonymous, not according to some ... it's just like food addiction. You can't really cut out food from your life, just like you can't cut out physical and emotional connections to other human beings.

We don't need drugs to survive, but we do need food and human connections.

If I go more than a week without, I get withdrawals. But I see that as a good thing - it keeps me on the move.