Jeff "Beachbum" Berry mixing up a 1950's version of the legendary Zombie cocktail.

Rum experts, judges and fanatics have alighted in South Florida from all over the world for this week's third annual Rum Renaissance Festival. The event kicked off in Fort Lauderdale on Monday with the Zombie Jamboree at the Mai Kai. Robert V. Burr, son of Robert and Robin Burr, founders of the festival, organized the event.

The apple doesn't fall far from the tree. Also known as "RumScout," the younger Burr's enthusiasm for rum was clearly evident during an impromptu interview while we took in some fresh air between drinks and dinner. For him, making rum drinks is an art form. "Mixology reminds me of jazz. Nobody does it like Miles or Bird," he said. "Everybody does a different riff, even though it's the same melody."

ZOMBIES ARE ALIVE AND WELL

Jeff "Beachbum" Berry, author and expert on tiki cocktails and cuisine, lectured on the fascinating history of the Zombie cocktail, which heralds back to 1934 when Donn Beach created the popular drink at his restaurant Don The Beachcomber in Hollywood, California. Beach was reticent about the ingredients in the cocktail, some of which were written in a secret code. As a result, bars around the world started creating their own versions of the wildly popular Zombie. Berry's meticulous research unlocked the secrets and as a result, we were able to taste as close an approximation as possible to the 1934 original as well as a 1950's version.

World War II, which sent so many American soldiers into the Pacific and Polynesia, certainly didn't put a damper on the immense popularity of tiki drinks that came after the Zombie. Soldiers returned with tales and souvenirs from the Pacific, Hawaiian eventually became a state, James Michener published Tales of the South Pacific, which would eventually become a musical by Rodgers and Hammerstein -- all this and more would romanticize the Pacific Islands for Americans. Don Beach himself settled in Hawaii and kept the tradition alive, although it's ironic that drinks made with Caribbean rums have come to be synonymous with Pacific cultures.

As I always say, the history of the drink is just as interesting as the drink itself and Monday night's Zombie tasting was no exception to my philosophy.

ZOMBIES OUT ON THE PROWL

After Beachbum's lecture, we sampled modern versions of the Zombie from half a dozen independent mixologists.

These two tiki bar owners from Manchester, England, were irrepressible. They "anglicized" their Zombies by adding the juice of various berries. Lyndon Higginson (left) of Keko Moku and Bart Murphy (right) of Hula Tiki Lounge.

A refreshing Zombie made with DonQ.

Atomic Grog also supports tiki culture and is based in South Florida.
A good Zombie is not your ordinary fruity cocktail. Forget your average strawberry daiquiri or piña colada here; this is the mother of all tiki drinks, and while it does contain fruit juices, this vintage beverage also packs a buzz, hence its namesake. All Zombie's feature various rums in combination with other liqueurs, juices, falernum and bitters. A Zombie is a classy, elaborate tropical concoction with intense flavors -- quite the cut above the watered-down slushy drinks you'll find at the average bar.

The tiki craze is alive and well today among rum lovers worldwide. In fact, tiki culture is popular a group of Ohioans developed The Fraternal Order of Moai, which now boasts several chapters around the country, including one in South Florida called the Gumbo Limbo.

The Rum Renaissance Festival is on-going until Sunday. The weekend promises to be memorable, with two grand tasting days at the Deauville Hotel, featuring cocktail competitions, seminars and more. It's a celebration of all cane spirits, not just tiki culture. With tickets at only $25 for a full day or $45 for both Saturday and Sunday, this has got to be one of the best cocktail "education" events in South Florida year-round. For other tasting events year-round, visit Gifted Rums.

The 10th annual Hukilau Festival, a celebration of all things tiki and Polynesian Pop, takes place June 9-12 in Fort Lauderdale.

For a true tiki experience in South Florida, head to the Mai Kai. "This is one of the best tiki bars in the world," Burr said. And that's clearly evident in the beverage menu, which features classic tiki drinks that are hard to find elsewhere in the area.

A Mai Kai bartender in front of one of their signature drinks.
If you live in or visit South Florida, don't miss the Mai Kai for a special treat. You'd never expect such a lushly landscaped oasis would be on a bland, strip-mall area of North Federal Highway, yet there it is and has been since 1956. Newcomers should experience dinner and a show, which features music and dance from various Polynesian islands with male and female performers. I was expecting it to be kitschy, but it was definitely worth it; I've seen greater Polynesian kitsch in Waikiki. 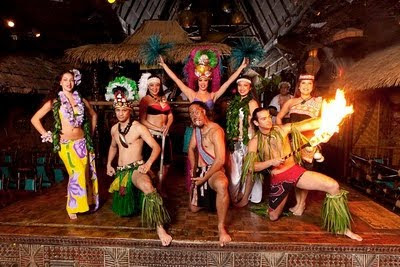 A taste of Polynesian culture is available year-round in Fort Lauderdale at the Mai Kai, which offers an excellent selection of tiki-inspired drinks. Photo courtesy of Mai Kai.
Dinner and show costs $45 per person. Choose an appetizer, main course and dessert from the Bali Hai menu, drinks not included. You can also order a la carte from the regular menu and pay $10.95 to enjoy the show while dining.

If you're a regular, or don't want to see the show, you can still have dinner elsewhere in the restaurant's different rooms, including outdoor seating in a garden area with waterfalls. Try the marinated roast pork, which is cooked tender in the Mai Kai's huge stone Chinese ovens.

For light bites and drinks, stop by the Molokai Bar, which I especially loved, since it's decorated in the fashion of a pirate ship. Happy hour takes place daily from 5 - 7 PM and offers 50% off appetizers plus most drinks.

Valet parking is complimentary at the Mai Kai.
Posted by Maria de los Angeles at 12:13 PM