Planet Manola: Don't Do This in Public 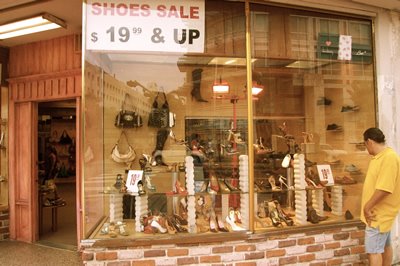 Shoe store on Washington Avenue, South Beach. $19.99 Made in China plastic high heels have the life expectancy of a fruit fly. Pick up a pair on your way to the club and toss them out later with the condoms!

In this edition, we pay tribute to unbecoming public behavior and homage to a rising star in the limelight of English grammar!

The young man who decided to tuck his junk into his pants while standing under the bright lights of the ATM machine on a busy intersection just off the Julia Tuttle Causeway. He unbuckled his pants, pulled them halfway down his thighs and then proceeded to shove it all in. Too bad I wasn't standing in line behind him! Maybe I could've swiped my debit card down his crack for cash, but this doesn't shock me, because ...

... when you gotta go, you gotta go! Earlier last week, in my perfectly respectable upper-middle class neighborhood, an older gentleman parked his car in a lot adjacent to a canal, opened the passenger side doors of his car, stepped in between both doors, pulled his pants and underwear down, squatted and then proceeded to defecate, thinking that no one could see him and not realizing that those of us who live on the other side of the canal had a full view of the ceremonious bowel movement! This is the sort of behavior you expect from a vagabond, but ...

... even the female bum who has been living on the same block as The Forge for donkey's ages would never stoop so low. Walking back and forth mumbling to yourself around the corner of the parking lot in the dark is no way to live life, honey. I know you never beg, but with all the money being pilfered away at that swanky gin joint, couldn't someone buy you a cheeseburger?

Speaking of cheeseburgers, last week heiress Parrot Hilton proved to the world once and for all that money can't buy you brains. The active party girl avoided the clink by a narrow margin, detained after driving under the influence on empty stomach. Supposably, her publicist could remind the 115-pound blonde to chow down on an In-and-Out Burger before drinking tequila?

Yes, supposably is a word!

I happen to be the aforementioned defecator, and I am not ashamed. Public pooping is at the core of my personal religious beliefs, and defend my right to drop a deuce anywhere I please.

Mighty Dyckerson said...
This comment has been removed by a blog administrator.
1:32 PM

Mighty that was you, wearing shorts and black socks? ;-)

At least the pooper picked an alley. On Flava of Love one of his "potential" loves pooped in the mansion with everyone around. She said, "It just had to come out." Ewwww!

Lordy. Public poopers should all be punished..or something. Did this older gentleman wipe, at least?

As for the junk fixing, every guy is allowed an under-five-seconds over-the-fabric adjustment. It is part of the Cowboy Code. Due to gravitational forces we must be permitted to adjust the twig 'n berries.

Yes, he did wipe, but then he threw the toilet paper on the ground!

Junk fixing over the fabric is fine, James! We wouldn't want our cowboys to be walking around all funny and uncomfortable. :-)

This guy, however, was doing a full fruit of the looms flashdance for all to see.

I don't care what your dictionary says; only people who poop on the ground use the word "supposably."
They're using it incorrectly because our school system is too busy banning books about kids in Cuba and not spending enough time teaching grammar.

I have a massive high heel fetish--I don't know where it comes from (or maybe I do?)

But even the sound of heels clacking down an empty hallway gets my blood pumping to the wrong side of me.

My favorite is the closed-toe black mule, pointy, when a chick on the train dangles it nervously from her toe.........