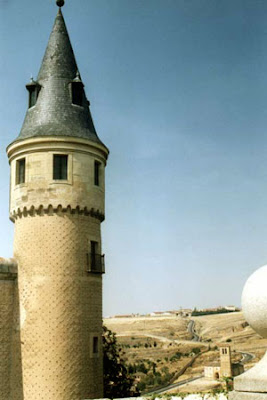 On the morning of 9/11, I was in the centuries-old Spanish city of Segovia. A friend and I had just visited the castle, where my imagination roamed wild, thinking about Queen Isabel and King Ferdinand giving Columbus his orders to explore the alternative spice route to the west that would lead to the “discovery” of a wholly different continent.

It was here, I mused, that America was born.

We then walked around this hilltop city, still stuck in its medieval form, walled in with cobbled stoned streets and broadcasting its even older Roman heritage by the aqueduct that stands strong.

So well preserved is history here that all thoughts of modernity escaped my mind. 9/11 would be a rude awakening from this mental vacation.

At 2:30 PM, we were having lunch at a hole-in-the-wall next to the cathedral. Amid the wine and food, one thing kept us with one foot in the 21st century – a very anachronistic and annoying television. I figured the tube was hanging on the corner of the bar because Spanish people are soccer freaks and watching matches is compulsory citizenship.

But a soccer game wasn't on TV. It was 8:30 AM in the U.S. and like most people, I could not believe what I was seeing. None of the towers had fallen yet. But I would see it all, thousands of miles away from home.

Shaky, clammy, heart racing, floor under me crumbling and sinking: a full-blown and real panic attack ensued. I was completely disoriented and all I could think of was that I needed to call home.

This was before I would ever consider carrying a cellphone abroad. And thanks to the delicious Spanish tradition, every single store in town was closed until 4 PM for the obligatory extended lunch and siesta.

It was an excruciating wait and somehow I managed to polish off my lunch mechanically, but I could have been putting steel bolts in my mouth, honestly, I wouldn't have known the difference. The wine helped but didn’t properly soothe. Every nerve in my body was raw yet I felt disconnected from my surroundings.

We eventually found a pharmacy that sold calling cards. My friend had to buy it for me because I couldn’t make sense of what the clerk was saying. Coins were dropping from my hands. I handed the money to my friend and she took care of the transaction.

I also struggled to remember phone numbers and my friend had to dial for me.

Not surprisingly, phone lines were jammed. 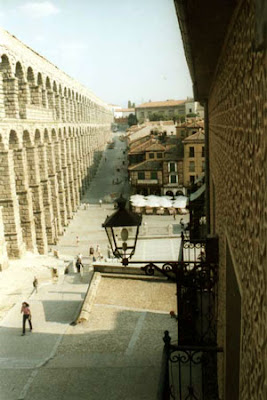 I smashed the receiver onto the hook and just walked away. I simply gave up. There was nothing I could do and I let the feeling of helplessness guide me, trusting my family was ok.

We wandered aimlessly around the streets in a surreal haze. I remember thinking about all the bloody history of this city and how its Roman aqueduct still stood strong.

“America is a young country,” I kept telling myself. “We don’t have ancient monuments.” This was the only thing that could anchor me. Buildings can fall but people can rebuild and be strong.

I had to spend an extra two weeks in Madrid because I couldn’t get a flight home any sooner. My Spanish friends and acquaintances were very sympathetic but in general there was a feeling in the air that Americans deserved it and that we finally got what it means to have terrorism in your own backyard.

This only reinforced my sense of what it means to be American. As much as I loved my Spanish roots, I was not going to give up on the land where I was born.

And even though I felt my world fall apart that day, it was those old stone structures of Segovia that gave me some sense of hope.
Posted by Maria de los Angeles at 12:27 PM

I'm glad that you found some solace in the ancient structures. On that day anything that anyone could find comfort in was welcome.

I was away from home as well on that day and could not get back. It was a bad day to be away from your home and your loved ones.

It was also a scary day knowing that one month later- to the day- I was bringing a child into this world.

I was in Nimes, France (halfway through a vacation). We had just returned to the hotel from an outing when some Canadians told us to turn on CNN that "something terrible happened in the U.S." We no sooner turned it on when I got a call from my son telling me that my family was o.k. -- and then that was it for communication for days

Perhaps surprisingly, based on what people say about the French-American relationship, we had a different experience and felt great warmth and sympathy from the locals.