TedX Miami Showcases the Best of the Magic City 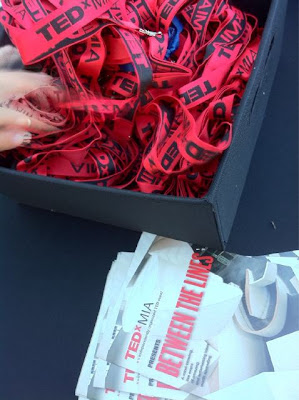 You want this lanyard, trust me.
TedX Miami outdid itself from last year’s already extraordinary first attempt. Held at the New World Symphony’s new campus, the event brought together nine outstanding speakers from all walks of life who are based in or vested in Miami.

The theme was Between the Lines, which is often where so many dynamic ideas begin.

Every speaker hit a raw chord -- literally, as in the case of the musical presentations – but also figuratively, giving us opportunities to think hard about the potential we all have to come up with positive, life-changing ideas. Every talk moved, inspired and provoked. Sometimes, the audience laughed and I'm fairly certain that in a few cases, there probably wasn't a dry eye in the full house, either.

This is one of the sentences I jotted down last night in my notebook: “The only way I can describe this TedX event is ‘breathtaking’ and it leaves me without words.”

So, I’m just going to give you a brief recap of each talk. But honestly? That can't even begin to do justice to all the profound thoughts that were shared. When you’re done reading, you’ll see why this was so kick-ass awesome and why there's so much more to Miami than meets the eye. 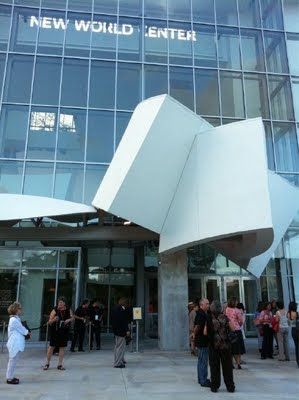 Attendees waiting for doors to open at the Frank Gehry building, the best thing to happen to Miami Beach since Columbus discovered America.
• Bestselling novelist Brad Meltzer begged the question of writing one’s own obituary. You don’t get to write your own obituary, but you do get to have a lasting impact. Your legacy isn’t just about children but about the people you influence in your life. Meltzer brought up the example of Jumbo’s restaurant in Liberty City. Founded in 1955, the restaurant hired black employees during segregation.

• Mathematics, computer and engineering super geek Scott Rickard asked if it was mathematically possible to write music without repetition and patterns. (Repetition is "key" to enjoyment. Think about it: you enjoy music because you know what's coming next.) A short piano piece called the Perfect Ping was performed and though it had no repetition, I dare say I think it’s impossible for the human ear not to seek it out. We are so wired that way.

• The absolutely lovely former fashion designer and now jewelry maker Barbara Devries spoke of Plastic is Forever. One day, she started picking up pieces of plastic debris on Eleuthera’s beaches -- random objects washed out by the hot sun and salty sea. Out of this hobby came not only beautiful jewelry, but also an entrepreneurial program for children in the Bahamas. Ironically, the kids actually sell jewelry to cruise ship guests – the cruise industry being one of the greatest polluters of Caribbean waters. De Vries wants her idea to be copied as there is enough plastic jetsam out there in the world for many more mini-entrepreneurial empires. Something to ponder: how many times a day do you come in contact with plastic?

• Dennis Scholl, Vice President of Arts at the Knight Foundation, spoke of Random Acts of Culture. This is a hell of a fun program. Imagine sitting at a food court in a mall minding your own business when suddenly Joe Schmoe sitting next you gets up and starts belting out opera. Actually, something similar happened last night in the audience as well, catching us by surprise with a rousing performance of Toreador from Bizet's Carmen, full female chorus included.

• My friend and brilliant artist Hugh Macleod exhibited some of his work in the hallway upstairs. The drawings were from the main TED Global conference at Edinburg earlier this year, part of a Dewar's scotch whisky series. (Very smart of Dewar's to sponsor TedxMia by the way. Scotch is sexy and smart.)

• TedX is a forward thinking event and the venue was perfect; the philosophy at New World is aligned. Talk about an idea worth spreading -- it's all about technology and universal access to music and music education. Bill Williams, Dean of Musicians at the New World Symphony, spoke on the subject. I’m just going to quote him: “We are sitting at the intersection of music, architectural beauty, technology and design, connecting musicians from around the world.”

(A personal note here: I used to write art and technology grants for the symphony and I saw this idea grow from seed to its current manifestation. I can’t even begin to tell you how thrilled I was to be in this hall.)

• I fell in love Felecia Hatcher from Feverish Ice Cream. She and her husband make gourmet popsicles from local fruit but it’s her kid’s entrepreneurial program (not unlike the one mentioned above) that really stood out. They have taught 20 kids in South Florida how to create and manage a popsicle truck business –- everything from picking strawberries to marketing in their own communities. That’s something very tasty -- ice cream with a cause.

• Colin Foord of Coral Morphologic discussed two hybrid corals growing, nay, thriving, at the mouth of Government Cut – two true South Beach beauties. An imminent dredging program is threatening the organisms. This is serious science stuff, folks. The corals are exceedingly rare, proving that adaptation is possible is an urban waterway and further study could help revive dead coral colonies in different bodies of water. Find a great article on the subject at Beached Miami.

• Did I say I was in love already? I was absolutely smitten with Shelly Baer, a luminous beauty who grew up with juvenile rheumatoid arthritis. Her condition is visible in her hands and in her limping walk, but honestly, if you see her real beauty, you can’t tell. My heart sank when she said: “I never looked into a full-length mirror until I was in my early 30s.” Baer was part of a show called Raw Beauty that exhibited in Miami a while back and featured women with disabilities. It was all about breaking stereotypes. “Beauty is in the flaws,” Baer told us with refreshing candor. In a city where plastic surgery is a lifestyle for some, hearing those words was like a breath of fresh air.

• Last but not least, Barrington Irving regaled us on how he broke a world record by flying around the world in an airplane he put together -- not just with mechanical parts -- but with some seriously gutsy grit. He's the youngest person and first black pilot ever to accomplish the amazing feat. Barrington then founded Experience Aviation in Miami, which brings math and science education to kids through a flying simulation classroom, among other programs.

Well, it's exactly what you just read. An evening of great ideas and inspiration and the best fifty bucks you'll ever spend in this town. But fyi: TED is a non-profit organization devoted to Ideas Worth Spreading. It all started in California 25 years ago. There are global conferences but the “x” offshoots are local, self-organized events designed to get people thinking about great ideas and how they impact community. TedXMia is a high-caliber grassroots effort, requiring devotion and hard work from many curators and volunteers.

Want more? TedXYouthCushman takes place on November 20 with kids sharing their own great ideas. The next TEDxMIA event is December 16 at Fairchild Tropical Botanic Garden. Tickets go on sale next week. I suggest you nab one right away; Between the Lines event sold out a month ahead of time. Videos from last night's event will be available to view on YouTube in the coming weeks. Find details about it all at the TedxMiami website.
Posted by Maria de los Angeles at 12:42 PM