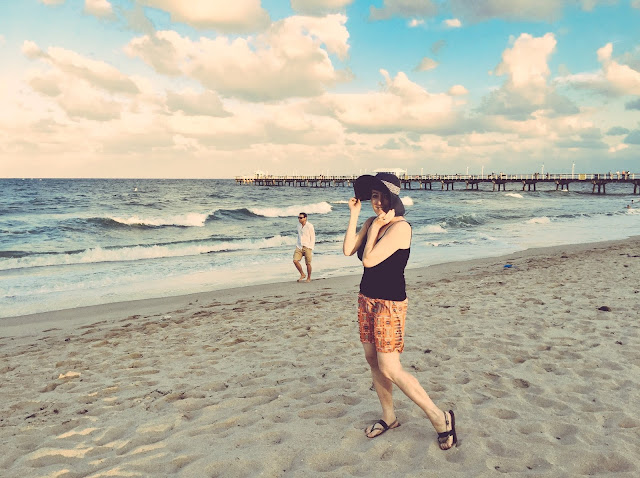 Merely to name them is the prose
Of diarists, to make you a name
For readers who like travellers praise
Their beds and beaches as the same;
But islands can only exist
If we have loved in them.

The weekend had finally arrived and after some time to myself, I craved the company of my man. The goddess cave was ready to receive him.

It was my last full day at the Windjammer in Lauderdale-by-the Sea. He would arrive later, after rush hour. Instead of walking by the water, I deliberately strolled over to Anglin’s Pier in the morning through the town’s streets. I love the fresh energy of dawn, birds chirping and people starting their day, the clings and clanks of city noises. Here, the energy was peaceful, proclaiming an already relaxing day. It’s a shame that first light spells misery for so many. No one should ever have to feel a knot in the pit of their stomach to start the day. What a waste of life, to wake up and breathe in a conditioned state of perpetual unhappiness.

Lauderdale-by-the-Sea was waking up gracefully. Maybe for someone working a breakfast shift, the alarm clock sounded the daily grind. I found that doubtful, however, considering the cheerful hospitality of this town. No poker face here.

On my last full day in Lauderdale-by-the-Sea, I would enjoy my respite to the fullest.

I had always thought that if I had a daughter, I’d name her Alba, which means “morning song” in Spanish. I love mornings; they’re about beginnings. Imagine that: a chance to start over radically, wiping the slate of yesterday’s drama clean, waking up to lightness, holding nothing but that drop of water or grain of sand in your hand.

What better way to receive my lover? I was ready.

I sat for a while at the pier, sipping a big glass of orange juice. “Gosh, it’s the last day,” I thought. “I was supposed to write about romance. What the hell?”

At this point, I was so overwhelmed with the sense of wholeness this experience afforded me that I hadn’t paid much mind to that crazy little thing called love. For me, this two-week sojourn in Lauderdale-by-the-Sea wasn’t about conventional romantic notions or about the rather corny and stale activities associated with romantic travel. There are only so many rooms, umbrella cocktails and glorious sunsets you can describe as romantic before your own prose becomes trite and redundant.

When two people dig each other, romance can happen anywhere, even in the craziest, most unexpected and sometimes even harrowing of circumstances. All else is icing on the proverbial cake.

As mother ocean’s fierce waves coursed under the pier, I asked myself: “who’s romancing who here?”

The destination seduced me with its simple charms. Lauderdale-by-the-Sea romanced me; won me over without so much glitz and glamour. It touched my heart, it let me be me, it gave me a secluded sea goddess cave so I could fall in love with myself again. Yet, as far as I was concerned, every single bed was welcoming and posh, affording me the luxury of rest.

In all the quietness, I found plenitude and learned that I could probably live out of a suitcase, that all I needed was just enough.

And when a woman loves herself enough to be so happy with whatever her mama gave her, she lays claim to her heart and becomes wildly irresistible to a man.

On my way back to the hotel, I let my feet get wet in the water. Over the course of two weeks, I had seen many fellow travelers enjoying the water. Today, some surfers were taking advantage of gusty winds blowing from the east.

Surfing is a lot like sex. You ride the waves, taming the power of mother ocean. But she’s got a dangerous undertow that can pull you down and deep beneath the surface.

Like surfing, sex is exhilarating but it too has a dangerous undertow that can drag us into dark, subterranean lairs.

I had been summoned by her to write about a series of boutique hotels that I could fancy as romantic, but first I had to ask myself: what does romance truly mean? It’s more than just a courtship ritual that brings two sexual organs together to share DNA. Or is it? Well, that’s what I think about when pornography comes to mind. Wham-bam-thank-you-m’am. Don’t let the door hit your ass on the way out. Walk of shame.

I saw no one taking a walk of shame in Lauderdale-by-the-Sea. In South Beach? Let’s just say it’s not unusual to call mornings on Ocean Drive “Dawn of the Dead.” Not that there’s anything wrong with a good romp. But rarely does anyone walk out that hotel room with their head held high.

If romance is a prelude to sex, I’d say that the best sex is non-sex or rather the sex that is performed so mindfully and with such precious care, without rushing, that the very act of love-making is everything, all the time. Everything that leads up to sex, everything that happens during sex and everything that comes after sex. Happy couples make love all the time, even when they aren’t bumping uglies in the sack.

Great sex is about dunking your water in the sea, trusting your lover with every single cell of your body, every single pore of your skin opening up to his flesh and touching the space of his body in a sacred embrace. Sex should be a vacation from the ordinary, a respite from the grind that spills over abundantly into the rest of life.

And with this in mind, yes, every single hotel on Romance Row can be as romantic as you want it to be, because it offers the kind of peaceful seclusion that lets you focus on falling in love and staying in love.

What a blessing, to be able to do this every day, even in the simplest form of a gaze that says “I love you” or in all those little things that aren’t so little: him schlepping all my damn luggage up the stairs or me not wanting to cook, so I order some of our favorite pho soup from Basilica, a local Vietnamese restaurant, to warm up on the little stove at the Windjammer, or him wanting to follow an MMA fight and me saying “fine, go to your man cave,” or me waking up before he does but eagerly waiting for him to rise and shine so we can talk about something funny I read on Facebook and then the two of us carrying on for an hour while showering and walking around naked in the room -- curtains drawn, of course -- discussing a million topics that diverged from that original conversation.

Where do you love?

Derek Walcott once wrote: “islands can only exist, if we have loved in them.” What he was referring to resonated with me on this trip, because “merely to name them is the prose of diarists” -- that’s me the travel writer - “to make you a name for readers who like travellers praise, their beds and beaches as the same” -- that’s me again telling you, dear reader, about this destination Lauderdale-by-the-Sea and its boutique lodgings on Romance Row.

But Lauderdale-by-the-Sea, like many beaches after my heart, is more than just a destination. It’s not a final arrival point; it’s the beginning of a journey within. You haven’t lived, or haven’t loved, if you come here just for the hotel room, its amenities and creature comforts -- these precious things are wonderful to enjoy. But come here also for love. Come here to fall in love again with yourself, your beloved and all your loved ones. You are more than just “beds and beaches as the same” and so is this quaint, seaside village.

I can only tell you how it romanced me. Now experience it yourself, in your own way. And treat your life this way, too. Have a little vacation in your heart everyday. That’s the one souvenir I took home with me, the memory of this love that is light enough to carry and brings so much satisfaction and joy.

Yes, I’ll hold you, drop of water and grain of sand, I’ll hold you in my hand, even though you’re tiny and I can barely see you. There’s whole universes in you. That’s the real love.

Posted by Maria de los Angeles at 1:00 AM