At 1 AM, startled by a door slam from next door, even though I was listening to music with headphones. So loud was the slam, made me jump in my seat.

Then, a strange, rasping noise on my front door. Then, the knocker. And then, nudging on the window, followed by a frenzied turning of the door knob and pushing of the door.

Heart racing, fingers shaking and eyes crying, I called 911. Cops arrived within minutes, but now, there's nothing I nor they can do.

I'll sleep with the phone close to my heart and hope it was someone trying to gain entry into my neighbor's unit. A simple mistake from one drunken idiot in an otherwise peaceful neighborhood and a family-oriented condo, right?

I'm typing in the dark.

You can't put a price on peace of mind. Feeling threatened when you're alone is turning Manola's smile into a frown. Sorry, my friends. Manola is scared ... and these monsters are real.

Thank you all for the support. Even though the surf is smooth today, I felt those waves of psychic calm and serenity travel across the Julia Tuttle and land in my home!

Rick, in a grand stroke of April Fool's irony, I thought "God forbid I should become a news item on SoTP!" (In case that happens, Manola's real name is Maria, by the way, just like your favorite tennis player.)

Trouble has been brewing in paradise since my neighbor and pals -- I'll call them Crackass and Company -- leased that apartment.

My friend (known as Male Platonic Friend in SATB) comforted me last night. I called him and he told me that a similar incident occured to him where he lives, a gated condo on Euclid Avenue, South Beach. A man pounded on his door while he was having sex with a girl. "It ruined the moment" he said. "But it was clearly a case of mistaken door identity."

Well, some comfort, but not long lasting.

Crackass and Company have been rabble-rousing and pulling shenanigans for months, including an incident last weekend, in which they were not only rude to one of my older neighbors, but also trespassed onto our terraces and dumped property into the canal. Although she witnessed the incident, she was too frightened to call the cops, and now Crackass hasn't even offered to replace the missing property.

As a result, they already received a letter from the condo association earlier this week, but Crackass has Lameass for a landlord. Lameass claims that "he's good pay" and that in order to evict Crackass for foul behavior, he would have to hire an attorney. Well, isn't this landlord liable for the disturbance in our lives?

Besides the obvious evening jitters, the inefficiency of the system galls me. Crackass and Company can get away with public disruption that is not only disrespectful, but harmful to others. And even the powers that be are powerless against Crackass and Company.

So, in typical Manola fashion, I thought I might put a big black and yellow sign on my door with an arrow pointing to the right with the following in big, bold letters: WRONG DOOR, SHITFACE

I've decided to take justice into my own hands. Note sign on the door. And to make it a fully interactive experience (just in case Crackass and Company are too shit-faced to read the WRITING ON THE WALL), I smothered the door knob with rancid canola oil (rancid only because I usually cook with EVOO).

Shame on you! Slap on the wrist! Don't even say MANOLA OIL because that is another story that will rear its stiff nipple after hurricane Crackass gets evicted and I can return to writing semi-fictional humorous anecdotes. I'm in survival mode, ok? But still, not bad.

Try turning a well-lubed knob, especially if you are a drunken sot.

"Ew. Did this knob just come all over me?"

All in a day's work here in paradise. 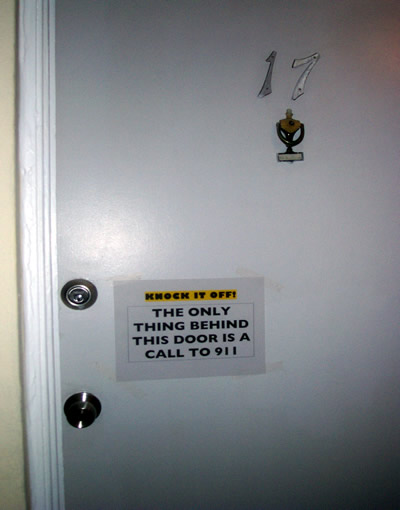 All quiet on the mundane front last night -- I even managed to draw a grungetoon, but once my head hit the pillow, my anxiety level prevented me from sleeping, because it was TOO quiet, a quality about my building's atmosphere I normally prize. Crackass' parking space was empty and so I anticipated the dreaded late-night knock. Like a character in an Edgar Allen Poe story, I was in fear of what might happen, but only because it already had happened.

Crackass owes me, but I'll let it go if I could only regain my sense of safety and peace.

See, Sir Fish a Lot, boyfriend numero dos from years ago who is still a friend, kindly invited me to go offshore fishing for dolphin (mahi-mahi) on his friend's boat, but I was too exhausted to make the trek down to Matheson Hammock Marina at 6:00 am. When I finally managed to nod off into light sleep early this morning, I swear I had a dream that someone was knocking on my door.

I feel a sense of violation, even though the moron never entered my space. It's too close for comfort.

Years ago, a friend and neighbor of mine (Lorelei on SATB) used to call me "old lady" not only because I would drive slowly -- always on the right lane -- but also because I would lock my apartment door just to go throw garbage down the chute or change a load of laundry. Now that she's a single mom to a toddler and and traded her mustang for a mommy mobile, of course, she takes ALL OF IT BACK!

But even years prior, when I was still "young and stupid," I was mugged at gun point in Coral Gables. At the time, the crime du jour was rear-ending a car so that the unsuspecting driver would leave the vehicle to check for damage. In no time, a masked mugger would jump out of the other car and by the time you realized you'd been duped, it was too late.

After feeling the cold metal on my face and the barrel click, I had every reason in the world to act like an "old lady," out-smarting the possibity of crime and being aware.

No Carnage at Apartment 17, but definitely difficulty recovering emotionally from the frightening incident, which might have made the night of the mugging also resurface unconsciously.

This morning, however, I had a good chuckle after reading Stuck on the Palmetto. I definitely need to brush up on my garden variety hex skills. Perhaps a dead chicken will ward off Crackass for good!
Posted by Maria de los Angeles at 4:33 PM

Rick said...
Times like that are when Mr. Smith and Mr. Wesson can be your best friends. Hope you finally got some sleep.
5:03 AM

Robert said...
Sorry to hear about your bad experience last night. I can't imagine how scary that must have been.

Hope you have a much more peaceful day!
6:58 AM

mkh said...
Aw, sweetie, I'm sory to hear about that! I know how frightening that is from personal experience. Deep breaths, kiddo.
7:07 AM

NicFitKid said...
That really sucks. I hope the drunken idiot/prowler/whatever-it-was wandered off into traffic and got hit by a bus.

Everyone send Manola psychic waves of calm and serenity. For the other guy, dispense some unholy terror.
10:10 AM

N said...
Poor you! I can't imagine how awful it must be to have horrible neighbours; our homes are where we're supposed to be able to relax and feel safe!

pawlr said...
Another trick, download an .mp3 of a viciously barking dog, and then run it through your stereo, cranking the volume, if it happens again.
6:19 PM

MiamiGirl said...
That sucks M. As much as I love living around other people, it's these times when I long for a quiet place in the country. Sometimes people are stupid, inconsiderate jerks.
9:41 AM

Trouble in Shangri La said...
Gosh, i'm sorry that you are dealing with this. It sucks. Manolo...here's a thought. You can always email me at pillars_of_color at yahoo dot com. Maybe I know someone who can help since I work with MDPD down there.
Trouble
4:28 PM

Anonymous said...
What an ordeal! Certainly enough to creep anyone out. The sign is pretty clever so hopefully they back up off it for good.
6:45 PM