[update: scroll down to bunion notes + photos of bejeweled roaches]

While I resuscitate SATB from near-death, here's a story I found to keep my lovin' readers entertained.

Sara Stewart of the New York Post reports that "This season's creepiest fashion accessory is a live, bejeweled cockroach worn as jewelry - and what better place for roach couture than New York."

New York? This is SO SOBE SOFLA! 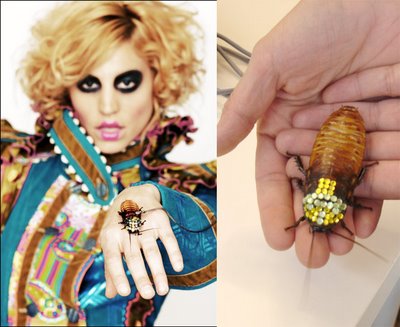 Come hurricane season, Palmetto Bugs -- yes, savage critters that elicit fear, respect and disgust and that are completely worthy of capitalized proper nouns -- will be having plenty of sex. After all, a recent New Times article proclaimed South Beach as the 'casual sex capital of America.' Palmetto Bugs should cash in on the latest fashion craze as well as the fact that all living things on the barrier island are constantly having sex without meaning ... OF COURSE!

Madagascar hissing cockroach? Please! Our SoFla cockroaches can FLY! So the Madagascar version hisses and defecates, but can it FLY? Oh yes, Palmetto Bug jewelry should cost that much more, as you'll have to hire a professional falconer to train and tame your roach. Now that's being fly on the fly, yo!

I think I know why the universe contrived to delete my blog. See, wearing insects as fashion is a sure sign of impending apocalypse and the certain foreboding of utter collapse. End of the world as we know it, for sure. I have FTP access to the archives of Nostradamus and there is a very obscure apocryphal text relating to the following tags: end of the world, froo froo, roaches and bling bling.

Seriously, buy your hurricane supplies NOW because we'll have to batten down the hatches and hunker down when the world ends due to the wrath of God, which is perfectly understandable. I'd be pissed off too, if I were God and my teenage daughter was wearing cockroaches.

What's more, Manola is up to her ovaries in insect issues. She's been battling mosquitoes in a skirmish no less passionate and bloody than Braveheart, using Windex to eradicate this offensive environmental vector. Can you imagine a phalanx of King Arthur wannabe warriors brandishing plastic bottles of Windex against near-microscopic buzzing and flying insects? 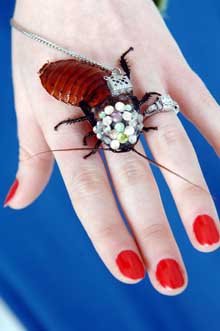 advice from the trenches

So, trust Manola. Here's how to be walk defensively in South Beach, always prepared to combat ICK:

Strolling down Washington Avenue -- la di da, la di da -- and you rub shoulders with a certain Ms. Froo Froo Slicemy Stilton is sporting a cockroach Swarovski accessory. Maybe it's a knock-off -- the jewels, not the roach. And suddenly, even though said Madagascar roach can't fly, it just took a hit of exstacy (along with its owner) and decided it just LOVES YOU and jumps on your shoulder! EEK!

A most difficult ethical decision, because as we all know -- if you are on the receiving end of "I don't welcome roaches in my space" -- aint no person on the planet going to sit there and just let a bug crawl all over skin.

So, on your keychain, gals, will be not only a can of mace, but Windex. Mace for rapists. Windex for insects. Oh, and throw in a can of EVOO, in case you have to cook gourmet low-fat. And of course, a can of KY in case the cookin' is REALLY good!

(Oh, do keep in mind. Windex won't eradicate a stupid fashion decision, but it will immobilize the bug.)

Guys? Here's why women carry such big purses for a big night. Clutch bag can't accomodate all these multi-purpose aerosols!

Now, speaking of ethics, be prepared, because Ms. Froo Froo Slicemy Stilton could hire her attorney to sue you for spraying Windex on her Swarovski bug.

[warning: these links will open new windows and crawl all over you]

Watch My Big Fat Greek Wedding to learn more about the benefits of Windex.

WTF is WHAT THE FROMAGE!

Answers to those frequently unasked questions about Stilton Cheese.

HAVE CASUAL, NOT CONDOMS

Manola 180 is concerned about lack of condoms in the casual sex capital of America. Kudos however to Emily Witt for bringing the issue out of the sheets and onto the street.

Original tip-off to story courtesy Stuck on the Palmetto.

Up here, the mosquitoes are out in full-force. I live in the woods, so they will not be deterred with a simple bottle of windex. And soon, very soon, the love bugs will be gunking up everything and bombarding my house.

If there's one thing Florida has, in spades, besides alligators and poisonous snakes, it's bugs.

At the FTG Orchid Show there was a delegation from the US Fish & Wildlife Service (I believe). Among the various illegal critters on display was a case of similarly bejeweled scarab beetles collected over 20 years ago.

Oh, and a box of illicit sliced deer dong.

There is no force on Earth that could ever make me wear a roach. Or touch a roach. Or be in the same room as a roach. Or look at a roach.

Let's advance this nauseating agenda a step further. How about a full-color Flying Palmetto Bug tattoo on your shoulder? Or neck? Or tit? Or....?