Happiness Is Just a Phone Call Away 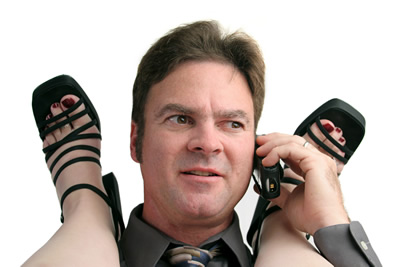 I recently met a man who has me utterly confused. He is generous, considerate, courteous and keeps his word. I mean he even calls when he says he will! OMG, I sprained my ankle and he took me to the ER! Oh and get this: he doesn't even want to fuck me up the ass! Isn't this the stuff of movies? I thought I was supposed to be treated like a douche bag!

Lucky at cards and love is a good fortune few possess. What great news you bring me, to have met a man who has shown you that disappointment need no longer be thy middle name!

To wit, nothing could be more satisfying to a woman than to fall in love with a man who is NOT an asshole. Letting down one's guard with a man you can trust is a real turn on and so much more important than the size of Colin Farrell's penis. Sorry, Pat Benatar, love need not be a battlefield!

Briefly, just so that you come to appreciate this new love, let's employ reverse psychology and review the true and unequivocal litmus tests of asshole vs. real man: PHONE, ER and ASS. During future sessions, we'll discuss other early warning signs so that you can learn to recognize an asshole before it's too late.

Asshole
No better early warning sign of asshole than his phone manners! This man can't be counted on, even if his life depended on it. This insidious breaker of promises will never call you when he says he will. What's more, he will look down at his phone in disgust when he is with you, because it's most likely his ex-girlfriend, the woman with whom he "accidentally" had two children, which makes you wonder if he ever looks down at his phone in disgust when you call him, as he constantly reminds you to not be like that nagging bitch who spawned his litter, which forces you to walk on eggshells during the entire relationship, turning you into a voiceless doormat who is frightened of addressing any honest grievance.

Real Man
No better early sign of a man with a heart of gold than his phone manners! This man can be counted on, because his life depends on how much he cares for you. This loving keeper of promises will always call you when he says he will, and so help him God if he can't, because there's a good reason he's not calling and because you've come to trust him, the missed phone call seems trivial in comparison to your love. Barring any genuine need involving family or work, he will not even have his phone on when he is with you, but if he has children and the mother calls, he doesn't look down at the phone in disgust, because he knows that she's calling for a good reason. You ask "oh are the kids, ok?" and the moment passes unnoticed. Because he is practically flawless in his gestures, you never need to nag and so instead of walking on eggshells, the relationship is easy like Sunday morning.

Asshole
After a weekend of sexual shenanigans, you acquire that women's common bane known as a urinary tract infection, but he doesn't respect the fact that you are standing naked, by the bed, with a medusa crown of wrath, holding a symbolic sawed-off shot gun ready to shoot him if he and his jolly wanker come within an inch of your body. Oh no! Instead, his six-foot, two-hundred pound body throws your petite frame down in bed, forcing you to have sloppy sex while you writhe in pain and continually tell him that he's a forty-something man who should know the difference between an anus and a vagina and to please stop trying to penetrate whatever hole that suits his fancy.

To make matters worse, you end up in the ER the next day and when you call him -- because of course, he hasn't called you to see how you're feeling, as his pathological numbness to you as reached new heights -- he says "I'm tired," instead of offering to come by the hospital, which is a perfectly reasonable expectation, considering he lives only minutes away and oh, by the way, he is allegedly a loving man. "Call me when you're done," he says. Of course, being the doormat you've become, you call, and naturally, being an asshole, he doesn't pick up the phone and you end up driving yourself in unspeakable pain to the pharmacy for antibiotics.

Real Man
After a weekend of sexual shenanigans, you acquire that women's common bane known as a urinary tract infection, but he shows genuine concern and takes care of your every need during your time of physical distress. Because you cannot convince your primary care physician to call in a prescription, you go to the ER as a last resort. Well, not exactly. He drives you to the ER. He's had a hard day and he's tired, but he can't bear the thought that the woman he loves is in so much pain. You look and feel like shit, but he manages to soothe your anguish. In fact, he steps out to buy you chicken soup, which you're craving.

Asshole
This really isn't about ass, you know. It's about respect. Threatening to go have sex with another woman who will please his need to stick his penis in a rectum is quite possibly the greatest sign of asshole EVER. At this point, you are wondering if he should just switch teams, because quite frankly, and with all due respect, gay fellas do enjoy the rump hump -- not that there's anything wrong with that! Hey, you are an open-minded, tolerant woman who respects what lovers in every flavor do behind closed doors and -- most importantly -- you also know that respect and honor is KEY, even in the kinkiest of worlds. So every time you make love, you purse your lips, legs and conscience tightly in anticipation of an act that constitutes a sincere violation of your body and spirit and he simply doesn't care. I mean, every time you take a dump, you think of him for having relieved you of constipation. Is this love? NO.

I'm not into the butt sex. I'm an old fashioned Dyckerson. I think a woman should swallow.